Do not throw out your fiberglass mattress – instead, document your findings 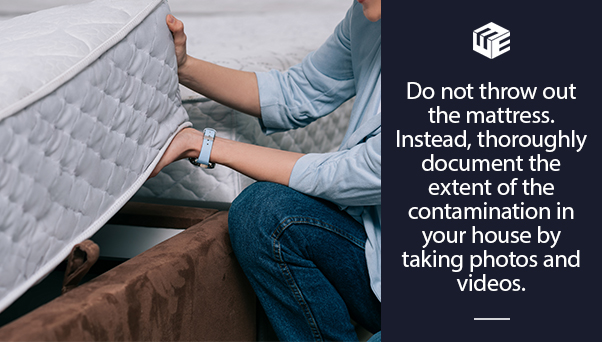 Recently, the fact that some mattresses can release dangerous glass fibers has come to light, and many people are eager to throw out their mattresses after hearing the news. However, if your Zinus, Ashley, or Nectar mattress began leaking fibers of glass, you should not throw it out right away, as it can be used as evidence to support your claim.

In March 2021, the two sons of a family from Prescott, Arizona, were injured by glass fibers in their mattresses. Their mother had previously taken out the outer covers of the mattresses to washing before they went to sleep. Approximately 15 minutes after they went to sleep, they woke up Amanda, their mother, and complained that they felt itchy.

The shocking realization that their bedroom was contaminated with tremendous amounts of fibers of glass dawned on Amanda when she shined a flashlight on one of the mattresses and saw that the fibers of glass lit up "like a disco ball." Subsequently, she discovered that glass fibers from the mattresses were present everywhere in her sons' bedroom.

Because Zinus, Ashley, and Nectar mattresses come with a zipper on their outer cover, this signals to the user that it is alright to remove it for washing, which is exactly what Amanda did. From painting walls to professional HVAC cleaning, the Richie family spent over a week deep cleaning their house while their sons stayed with other family members.

During the cleanup, Amanda and her husband, Josh, could feel the fibers of glass irritating their skin and experienced coughing and sneezing from inhaling the dangerous fibers of glass.

Eventually, they had to throw out many pieces of furniture and toys in which the fibers of glass had become embedded. Unfortunately, this is just one of the numerous similar cases in which people took out the outer cover of a mattress with fiberglass to find out later that their entire house has become contaminated with the flame retardant.

Should I throw out my mattress if it has fiberglass?

If you have a mattress whose outer cover you removed for washing and your home became contaminated with fibers of glass, we strongly advise you not to throw out the mattress. Instead, you should thoroughly document the extent of the contamination in your house by taking photos and videos while shining a flashlight on the areas with fibers of glass, which will be used as evidence for your lawsuit or claim.

After you gathered enough proof, you should keep the dangerous mattress in a place outside your house so that no further contamination can occur. Next, you should hire a team of professionals to deep clean your home, as it is impossible to get rid of fibers of glass by yourself due to their microscopic size.

You should also keep the bill you receive after your house is safe once again so that you can prove the cost of the cleanup in your lawsuit or claim, as the cost of such a cleanup can be extremely high.

Finally, if you sustained physical injuries resulting from coming in contact with fibers of glass, you should keep the medical bills, which will also be used as evidence.

Not only will taking legal action help you recover the money you spent on cleaning your house and on getting the medical services you needed, but it will also hold Zinus, Ashley, or Nectar liable for negligence, specifically for failing to explicitly warn consumers not to remove the outer cover of the mattress, as well as by placing a zipper on the outer cover.

At the moment, there is a class-action lawsuit against Zinus awaiting the approval of class certification that you can join to obtain the financial compensation you are entitled to if you were also injured by the fibers of glass in the mattresses of this company. If, however, the fiberglass in a Nectar or Ashley mattress caused you harm, you can file a claim with the culpable manufacturer, which will also result in compensation.

Our attorneys will help you gather the necessary evidence to prove the damage you suffered as a result of contamination with fibers of glass and will help you join the lawsuit or file a claim with minimal involvement on your part.

With over 25 years of experience in pursuing compensation for people injured by toxic exposure and defective products, our lawyers are ready to represent you in the class-action lawsuit against Zinus if you were one of the many individuals whose health was affected by the dangerous fibers of glass in these products. They will also gladly help you file a claim with Ashley or Nectar if one of their mattresses injured you.

You will only have to provide our legal experts with evidence of you owning a mattress with fiberglass and proof of your injury, as the rest of the paperwork will be efficiently taken care of by our team.

To ensure you receive the maximum compensation you are entitled to, we will do extensive research to find additional evidence for your case. Eventually, you will obtain the most favorable outcome for your case if you decide to work with our law firm, which is free of charge unless we recover money for you.