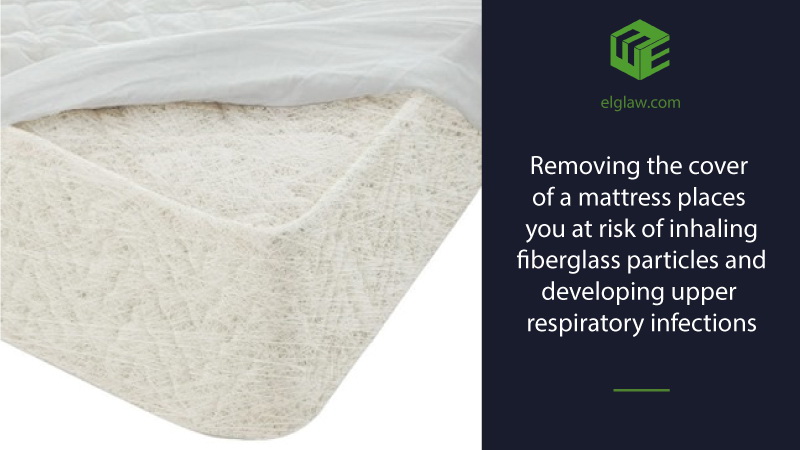 Exposure to fiberglass in a mattress can make one more susceptible to developing upper respiratory infections. This is because the fibers of glass are very irritating to the airways and the lungs. According to medical studies, the presence of fiberglass along the respiratory system triggers a macrophagic reaction, which means that white blood cells will begin attacking and destroying the cells of the body that are not healthy.

While the immune system causes this reaction, it works to the fullest to defend the body against the fibers of glass, allowing pathogens to enter the upper respiratory system and subsequently cause infection. The most common upper respiratory infections are the following:

Therefore, if you have an Ashley or Nectar mattress whose outer cover you removed for washing and fiberglass was released in your house, you inevitably breathed in some of it, which places you at higher risk of developing upper respiratory infections. Unfortunately, fiberglass cannot be eliminated from your body entirely, as some of the particles are microscopic and have rough edges, which causes them to embed themselves in the tissue that lines your respiratory system.

How do I know if I inhaled fiberglass from a mattress?

If you took off the outer cover of your Ashley or Nectar mattress, the chances are that it released a certain amount of fiberglass in the room. Furthermore, if you disturbed the mattress while the inner layer was exposed by sitting or jumping on it, a large amount of fiberglass was unavoidably released into the room. The signs of fiberglass inhalation are coughing, sneezing, and a sore throat. In the unfortunate event that you inhaled fiberglass, you cannot do much except wait for your body to eliminate it by itself. However, you are now at high risk of developing upper respiratory infections.

While this may not seem like a serious injury, you should still document it, and we strongly encourage you to file a claim with Ashley or Nectar, as you were injured by one of their defective products. You may be entitled to financial compensation, which may come in handy if your house was contaminated with fiberglass, as hiring a team of professionals to clean up the damage can be quite expensive.

File a claim with Ashley or Nectar with our assistance

Since 1990, we have been providing legal assistance and representation to more than 230,000 people whose health was affected by toxic exposure and defective products and are bound to help you as well if you were injured by the fiberglass in an Ashley or Nectar mattress. While the legal process is complex, it will require minimal involvement on your part, as you will only have to send our attorneys evidence of you owning a mattress with fiberglass and proof of related injury.

If you were injured by a Nectar or Ashley mattress, we will help you file a claim with the responsible manufacturer. Eventually, you will receive the money you are entitled to. If you choose to work with our experienced legal team, you will certainly obtain the most favorable outcome for your case.