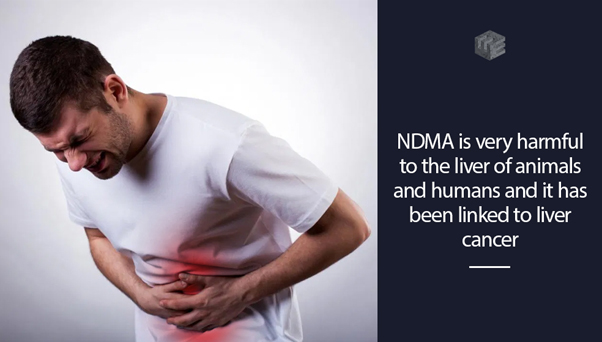 In humans, NDMA can be disruptive to DNA, which may cause cancer. Repeated-dose toxicity studies have shown an association between NDMA and liver toxicity which can lead to the development of liver cancer and other related conditions caused by NDMA-induced damage to the liver.

In September 2019, the U.S. Food and Drug Administration alerted patients and health care professionals of a "probable human carcinogen" called NDMA (N-nitrosodimethylamine) found in ranitidine - also known by its brand name Zantac. As a result, several pharmaceutical companies were voluntarily recalling various ranitidine-containing products, and many patients and consumers are left wondering what exactly they may have been exposed to.

Because the chemical is classified as a B2 carcinogen, people who took Zantac or generic ranitidine for at least one year may be at higher risk for liver cancer.

Ranitidine is an acid-suppressing agent that belongs to the class of medications called H2-receptor antagonists, available under multiple brand names and in several different forms. Prescription ranitidine is used to treat stomach and duodenal ulcers and prevent them from recurring. Each year, doctors write more than 15 million prescriptions for anti-acidity drugs that contain the ingredient ranitidine, including Zantac, while countless more patients buy them over the counter. According to the Centers for Disease Control, exposure to NDMA by eating, drinking, or breathing could cause cancer in humans. NDMA is very harmful to the liver of animals and humans and it has been linked to liver cancer.

NDMA, a chemical byproduct of many industrial manufacturing processes, doesn't degrade or break down naturally in the environment or our bodies, meaning that our exposures only build-up, or bioaccumulate in the tissue with a preference for the liver, kidneys, and blood.

Many over-the-counter and prescription medications contain substances that can damage the liver by directly damaging liver cells, by blocking the flow of bile out of the liver, or by doing both.

The liver is responsible for eliminating toxic substances that have been ingested, including toxic medications from the blood. This metabolically active organ responsible for many vital life functions secretes toxins with the bile for elimination in the stool or secretes them back into the blood where they then are excreted by the kidneys and eliminated in the urine. Sometimes, as the liver does its job to process the blood, toxins can build up in the liver tissue leading to inflammation and damage.

Drugs are an important cause of liver injury. Doctors classify drug-induced liver injury depending on how the drug damages the liver, how liver cells are affected, and which liver enzyme abnormalities are detected by blood tests. The state of health of the liver as a result of the interaction with certain drugs depends on:

Chronic exposure to high levels of NDMA in humans has lead to liver damage. NDMA overexposure symptoms include dizziness, nausea, abdominal cramps and diarrhea, fever, enlarged liver, and jaundice. Please talk to your GP if you are on ranitidine and experience these side effects.

The earlier that liver cancer is diagnosed, the smaller the tumors, and the better the options for treatment

Liver cancer is the uncontrolled growth of abnormal cells that develop in the liver. In the early stages, liver cancer may have no symptoms or symptoms may be vague. When the disease reaches an advanced stage, symptoms may include:

Any of the symptoms listed above can alert a medical professional of the risk of liver cancer. However, these symptoms can also be caused by other conditions , such as fatty liver, hepatic hemangioma or liver abscess, which is why getting a second opinion is crucial.

Some further investigations that a doctor can carry out to try to diagnose liver cancer include ultrasound scans, blood tests, hepatic angiography, and liver biopsy. Early and proper diagnosis of liver cancer can be life-saving.

If liver damage caused by drugs is identified quickly, patients have a better prognosis. Patients taking prescription ranitidine are encouraged to speak with their physicians about treatment alternatives and to report adverse side effects. When the diagnosis of liver cancer is confirmed, the type of treatment depends on a number of factors, including the stage of cancer, age, and general health. Surgery, partial hepatectomy, radiation therapy, and chemotherapy are potential treatment options.

Be sure to talk with your doctor about how liver cancer diagnosis might be related to the medicine you take so that your concerns are documented in your medical records. You may also wish to speak with an attorney about recovering financial compensation. If you or a loved one were diagnosed with liver cancer after taking Zantac, we can help you with a claim. Your cancer diagnosis may be related to the carcinogens present in Zantac or generic store brand versions of the popular heartburn remedy ranitidine, and it's our goal to help you get compensation for your current and future medical bills, current and future lost wages and pain and suffering.