Ranitidine, sold mostly under the brand name Zantac, is a drug that relieves or treats heartburn, gastroesophageal reflux disease, acid indigestion, and gastric ulcers. In June 2019, the independent laboratory Valisure found NDMA, a carcinogenic substance, in the medication. The concentration of NDMA in Zantac was 500 times greater than the safe intake limit. As a consequence, people who took the medication for one year or longer have a significantly higher risk of developing cancer. It is important to note that Zantac 360, the drug manufactured by Sanofi, contains famotidine, which makes it safe to use. Still, if you took ranitidine made by another pharmaceutical company and came to struggle with cancer, we encourage you to contact our attorneys, as you may be entitled to compensation. 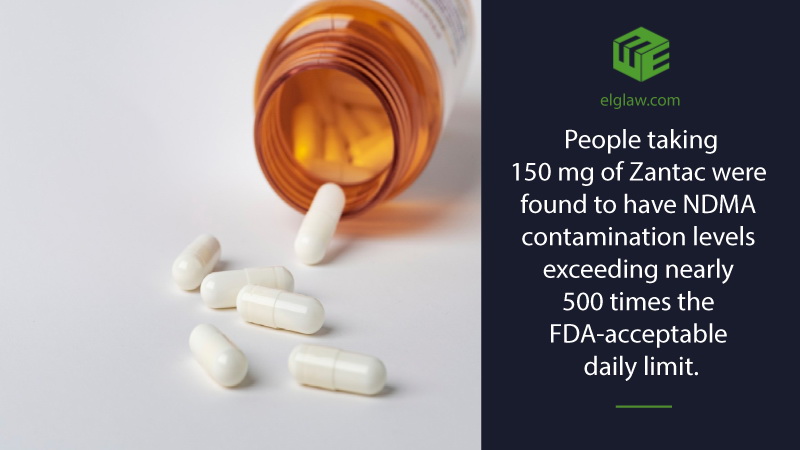 In April 2022, there were 2,100 Zantac cancer lawsuits pending in federal court. However, the real number of these lawsuits is over 50,000.

The chemical nitrosodimethylamine, lurking in Zantac and other drugs with ranitidine as the active ingredient for nearly four decades, is a probable carcinogen.

While the medication already contains NDMA, when a person takes Zantac, their body produces even more of this dangerous chemical because of the instability of ranitidine. People who took Zantac and developed cancer file lawsuits because:

More than 160,000 consumers have filed claims in a U.S. federal registry. If only 60% of these people further pursue their claims, the settlement value may reach between $7.5 billion and $10 billion. The ranitidine manufacturers GlaxoSmithKline, Haleon, and Sanofi have already lost $40 billion of market value in a matter of days. Madison County, Illinois, is a venue where juries have given big verdicts in the past. Two residents of that state are suing over a dozen manufacturers, including:

Over 1,700 cases are consolidated before a federal judge in Florida in a multi-district litigation. Soon, it will be decided whether they go to trial or are dismissed, which will be crucial for the defendants. Furthermore, many generic manufacturers have also been listed as defendants in Zantac cancer lawsuits, including Sun Pharmaceuticals, Doctor Reddy's, and Teva Pharmaceutical Industries Ltd. Nevertheless, the greatest exposure concerns the above defendants. While Sanofi claims that "the plaintiff will be unable to prove that Zantac causes any type of cancer," GlaxoSmithKline stated that the litigation was "inconsistent with the scientific consensus.

Numerous medical specialists who diagnosed people with cancer after taking Zantac said they had no family history or genetic markers for the disease. Instead, doctors told patients their cancer was the result of exposure to something from their environment, which might include the NDMA in Zantac. The following are the cancer diagnoses that make a person eligible to file a claim with one or multiple ranitidine manufacturers:

Out of these malignant diseases, bladder cancer has the strongest causal relation with NDMA exposure. The symptoms of overexposure to NDMA include hepatitis, liver failure, jaundice, skin rashes, hair loss, nausea, fever, vomiting, abdominal cramps, and dizziness. Primary pulmonary hypertension and Chron's disease also have a link to Zantac use. Nonetheless, people cannot file a claim if they used the drug and developed these two health problems. 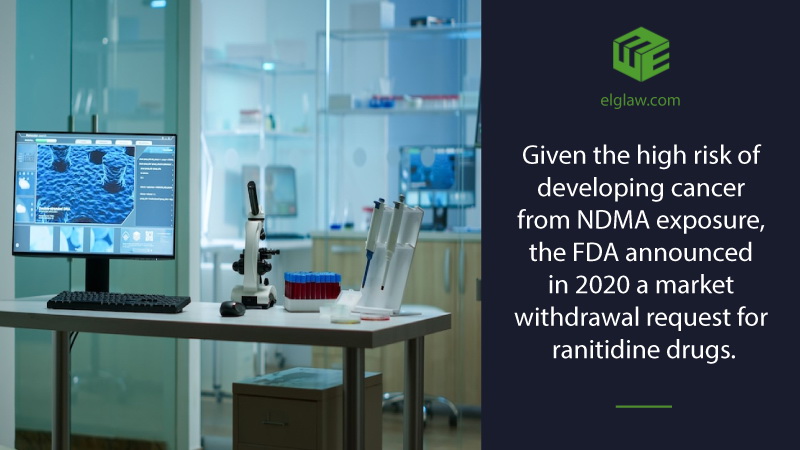 While each case is unique and must be thoroughly reviewed by a lawyer whose area of practice is defective drugs, consumers seeking legal recourse must meet certain requirements to become eligible for a Zantac cancer claim. These are the main eligibility criteria one must meet to qualify for compensation:

Even if you are not sure whether you are eligible for compensation from the Zantac manufacturers, we advise you to contact our law firm anyway. We have the necessary experience, knowledge, and resources to determine whether you meet the criteria for filing a claim. Taking legal action will not only provide you with financial compensation that will cover the cost of your treatment but may also discourage manufacturers from being negligent in the future.

A timeline of events regarding Zantac

August 24, 2022 – four generic Zantac manufacturers pay $500,000 to settle a case Ranitidine manufacturers Teva Pharmaceutical Industries, Perrigo, Sun Pharmaceutical Industries, and Dr. Reddy's Laboratories agreed to pay a total settlement of $500,000 in the case of Joseph Bayer. This happened before the case was set to go to trial in the Illinois state court. It would have been the first case to go to trial. The plaintiff claims that the heartburn medication is responsible for his esophageal cancer diagnosis.

However, the largest number of claims was filed in California. The date for the first bellwether in the California Ranitidine Product Cases is February 2023, according to Superior Court of Alameda Judge Evelio Grillo.

With famotidine as the active ingredient, Zantac 360 is a new Sanofi drug that can relieve or treat heartburn, gastroesophageal reflux disease, acid indigestion, and gastric ulcers as effectively as the old medication. Zantac 360 contains no ranitidine, which makes it safe to use, and it was approved by the FDA. Sanofi decided to manufacture this medication as a viable alternative to the old Zantac, eliminating the cancer risk associated with the former ranitidine-containing drug.

In a new filing from attorneys representing over 70,000 former patients, Sanofi is accused of "widespread" destruction of employee emails tied to its 2019 recall of the drug, which preceded the FDA's ban in 2020. The pharmaceutical company and many others face lawsuits alleging they kept cancer risks from the drug hidden, and the new filing outlines alleged roadblocks the drug makers put up to delay the legal process, according to the plaintiffs' lawyers.

According to the company, Sanofi "did not intentionally destroy any emails related to the Zantac litigation," and "any suggestion to the contrary is false." Furthermore, "Sanofi has provided hundreds of thousands of pages of relevant discovery to the plaintiffs, including internal emails, test results, safety assessments, and correspondence with regulatory authorities."

April 1, 2020 – the FDA announced a market withdrawal request for all ranitidine drugs

On April 1, 2020, the FDA announced a market withdrawal request for all prescription and over-the-counter ranitidine drugs. This was the latest step in the ongoing investigation of the contaminant known as NDMA in ranitidine-containing medications, commonly known by the brand name Zantac. The agency determined that the impurity in some ranitidine drugs increases over time and, when stored at higher than room temperature, it may result in exposure to unacceptable concentrations of this impurity. As a consequence of this immediate market withdrawal request, ranitidine products would not be available for new or existing prescriptions or over-the-counter use in the country.

Sanofi took a €169 million – or $186 million – write-down on Zantac in the fourth quarter following its October global recall of the drug. The recall torpedoed Sanofi's consumer health division, with sales decreasing 12.8% in the quarter to €246 million – $270.6 million. The drug manufacturer also targeted its own divestment efforts as a drag on the division overall.

Denton Pharma Inc. dba Northwind Pharmaceuticals becomes the 14th generic Zantac manufacturer to issue a voluntary recall in the United States. The company took off the shelves all unexpired lots of its ranitidine and ceased distribution, too.

November 1, 2019 – the FDA states that the level of NDMA in Zantac is not dangerous

On November 1, 2019, the FDA released the results of its NDMA testing. The levels of NDMA ranged between 0.03 and 2.85 parts per million in 18 different products, and the agency said these concentrations are consistent with levels in common foods such as grilled or smoked meats.

Mark Allan Blake, a resident of Colorado, filed a lawsuit against Sanofi, Boehringer Ingelheim, Pfizer, GlaxoSmithKline, and Chattem Inc. on October 21, 2019. The man began taking prescription Zantac in 1996. Subsequently, he started using over-the-counter Zantac, which he would take four times a week. In 2018, Blake was diagnosed with bladder cancer, a disease which he attributes to ranitidine use.

According to the lawsuit, medical studies have found that Zantac can produce high levels of NDMA since at least 1981. "This was not done by accident or through some justifiable negligence. Rather, Defendants knew that it could turn a profit by convincing consumers that Zantac was harmless to humans, and that full disclosure of the true risks of Zantac would limit the amount of money Defendants would make selling Zantac," the complaint says.

Sanofi issued a recall for over-the-counter brand-name Zantac 150, 150 Cool Mint, and Zantac 75. This was the first brand-name recall. The pharmaceutical company also recalled these drugs in Canada.

October 17, 2019 – the FDA releases a second method of detecting NDMA in ranitidine

The FDA developed another method of determining whether NDMA is present in ranitidine, known as Liquid Chromatography-Tandem Mass Spectrometry.

During this period of time, multiple retailers across the country, including Walgreens, CVS Pharmacy, Rite-Aid, and Walmart, suspended all sales of brand-name Zantac and its generics.

On September 24, 2019, the global leader in generic pharmaceuticals Sandoz issued a voluntary recall on Zantac. The specific drug the company took off the market is Ranitidine Hydrochloride Capsules 150mg and 300mg. Sandoz has not received any reports of negative health effects occurring due to the use of the product as part of this recall.

September 13, 2019 – the FDA issues a statement that some ranitidine drugs may contain NDMA

Dr. Janet Woodcock, the FDA's Director for Drug Evaluation and Research, issued a statement informing the public that some ranitidine medicines may contain NDMA. The agency released a method known as Liquid Chromatography-High Resolution Mass Spectrometry, which is used to determine the presence of the probable carcinogen in ranitidine. The FDA recommended manufacturers test their products and send samples to the agency for further testing.

In June 2019, the independent pharmacy and laboratory Valisure found N-nitrosodimethylamine – NDMA, for short – in multiple samples of Zantac. The Food and Drug Administration was promptly alerted and informed about the problem, and Valisure sent a Citizen's Petition urging the recall of all the affected drug lots. N-nitrosodimethylamine is a probable human carcinogen, meaning that it may lead to the development of malignant diseases such as liver cancer, stomach cancer, bladder cancer, pancreatic cancer, and esophageal cancer. It was found in Zantac by the Valisure researchers in excess of 3,000,000 ng per tablet, a concentration significantly higher than what health agencies determined to be safe for human ingestion based on lifetime exposure.

Developed by GlaxoSmithKline in 1983, Zantac is a medication containing ranitidine as the active ingredient and is used to treat heartburn. This is a condition entailing burning pain or discomfort in the upper chest and mid-chest, sometimes involving the neck and throat, that can worsen when lying down. The causes of heartburn include eating spicy food, drinking alcohol, overeating, or wearing tight clothing. Working as a histamine-2 blocker, Zantac decreases the amount of acid the stomach produces.

Our skilled attorneys will help you file your Zantac cancer claim

With over 25 years of experience in toxic exposure and defective drug cases, our skilled attorneys will provide you with quality legal assistance if you took Zantac or ranitidine by another manufacturer and developed cancer. Because we know how overwhelming and exhausting struggling with a malignant disease can be, we will do all in our power to make the legal process as easy to navigate as possible for you. Our legal team will guide you through every step of the process and keep you posted regarding the progress of your case. The only documents we will request are evidence of you having taken Zantac in the form of prescriptions or receipts and your medical records clearly stating your cancer diagnosis and its link to ranitidine use. After we carefully review your case, we will determine whether you qualify for filing a Zantac cancer claim. If you are eligible, we will start preparing your claim for submission, and you will eventually obtain the maximum compensation available for your diagnosis. Because we work on a contingency fee basis, you will not have to pay our law firm anything unless we recover money for you.