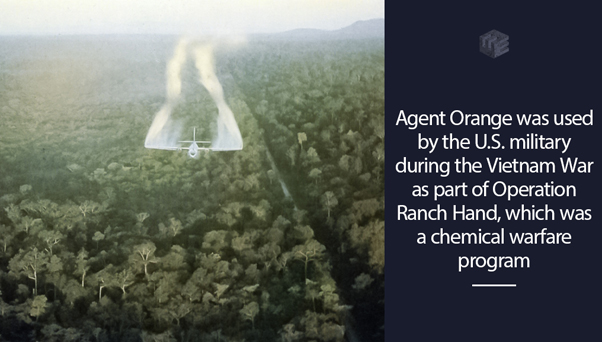 People who served during the Vietnam War were inevitably exposed to Agent Orange, a toxic herbicide that can lead to the development of lung cancer, among other serious diseases. However, veterans who are now struggling with a disease as a result of exposure to Agent Orange can recover compensation for their suffering.

As a herbicide and defoliant chemical, Agent Orange was used by the U.S. military during the Vietnam War as part of Operation Ranch Hand, which was a chemical warfare program. It is estimated that over 4 million people were exposed to Agent Orange and 3 million of these individuals came to struggle with terrible diseases such as leukemia, prostate cancer, ischemic heart disease, and lung cancer as a result of exposure. Today, veterans who were exposed to Agent Orange and developed a disease as a consequence of exposure are eligible for compensation from the VA, which they will receive after filing a claim in the form of disability compensation. However, the VA offers other benefits as well to veterans injured by Agent Orange and their family members, depending on their disability rating, which can range between 0% and 100%.

It is important to know that, during the period of time Agent Orange was used, asbestos exposure also occurred in the military personnel who were serving throughout the Vietnam War, which may have contributed to their developing lung cancer and other respiratory diseases, such as esophageal cancer, bronchial cancer, and throat cancer. Thereby, if you are a veteran who was exposed both to Agent Orange and asbestos, you qualify for compensation both from the asbestos trust funds of the companies which manufactured the hazardous products you were exposed to and from the VA. With the assistance of a lawyer who specializes in toxic exposure cases, you are bound to recover the maximum compensation you are eligible for from the parties at fault.

The causal relation between exposure to Agent Orange and lung cancer

According to a 1994 report by the Health and Medicine Division of the National Academy of Sciences, Engineering, and Medicine, there is a strong connection between exposure to Agent Orange and the development of lung cancer and other respiratory malignant diseases. Because the herbicide contains dioxin, a toxic agent, exposure to Agent Orange, which occurs when a person inhales the substance, can lead to lung cancer, as well as to bronchial cancer, esophageal cancer, and throat cancer. Dioxins are a group of chemicals that are persistent environmental pollutants, which means that once they are released, they remain in the water, soil, and air forever, thereby endangering the health of everyone who is in close proximity for a long period of time.

If a veteran was exposed both to Agent Orange and asbestos while serving during the Vietnam War, which was the case for the majority of veterans, their chances of developing a terrible disease increase tremendously. Today, over 30% of veterans struggle with diseases caused by military asbestos exposure, as the military made use of enormous amounts of asbestos between 1920 and 1980, particularly the U.S. Navy. Nevertheless, it is important to know that if you are a veteran with a history of exposure to Agent Orange or asbestos and suffer from a related disease, you immediately qualify for compensation from the VA. Asbestos trust funds also offer compensation to veterans injured by military asbestos exposure and a lawyer whose main area of practice is toxic exposure cases will be able to provide you with the legal assistance you need to obtain the compensation you deserve for your physical and emotional suffering. Currently, there are 52,000 veterans who are receiving monthly compensation for the diseases they developed as a consequence of exposure to Agent Orange throughout the country.

What other diseases can exposure to Agent Orange cause?

It is worthy of note that if you have a disease which is the result of exposure to Agent Orange, the VA does not require you to provide documents that support the causal relation between your diagnosis and exposure to the herbicide. You will automatically become eligible for compensation if you have one of the following diseases and served during the Vietnam War:

If, however, you developed a disease as a result of military asbestos exposure, you will have to provide your attorney with your military records, as well as with your medical records, documents which will accompany your asbestos claim as evidence of asbestos exposure and of related diagnosis. These are all the documents you will need to send to your lawyer, as they will carefully take care of the rest of the paperwork and thoroughly prepare your claim for submission to asbestos trust funds and the VA. Depending on your disability rating, you can receive between $281.87 and $3.106 every month. The amount of money you will receive for a disease caused by exposure to Agent Orange will also depend on your disability rating, the compensation being $3,800 per month on average.

In the regrettable event that you came to struggle with a disease as a consequence of exposure to asbestos, you are eligible for compensation both from asbestos trust funds and the VA.

If you were exposed to Agent Orange and asbestos, there must be asbestos fibers in your lungs to qualify for compensation, regardless of your diagnosis. Our medical experts offer free of charge asbestos screening for veterans with a history of military asbestos exposure and they will be able to tell whether you have asbestos fibers in your lungs after carefully examining your most recent chest X-ray. Furthermore, our medical experts will conduct additional tests and exams to assign you a correct and accurate diagnosis, such as breathing and blood tests.

If there are asbestos fibers in your lungs, our specialized attorneys who have been helping veterans injured by asbestos exposure since 1990, will provide you with quality legal assistance. They will file a claim on your behalf with one or multiple asbestos trust funds and with the VA to recover the maximum compensation you are entitled to, which will also help you afford superior healthcare and treatment for your disease. Finally, you should keep in mind that asbestos exposure cases have a statute of limitations of 3 years in most states, which should make taking legal action a priority. It is ideal to seek the services of a lawyer specialized in asbestos exposure cases as soon as you receive your diagnosis.