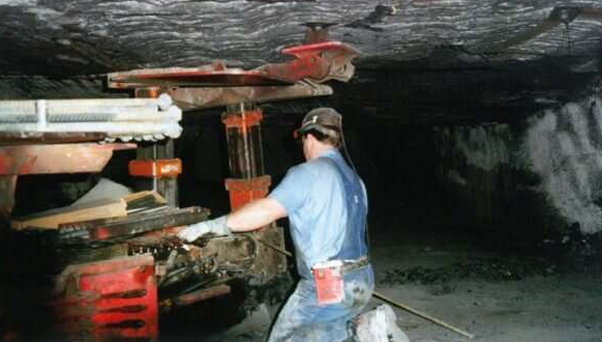 Blue-collar is the class of skilled workers who engage in hard manual labor, typically in manufacturing, construction, mining, or maintenance.

Manufacturing - In factories, blue-collar workers can be exposed to everything from inhaled metals in foundries to silica which can lead to silicosis, a condition that scars the lungs.

Construction - Occupational exposures encountered by construction workers can cause many kinds of lung diseases. For example, exposure to respirable crystalline silica and asbestos can lead to an interstitial lung disease that causes damage and fibrosis in lung tissue, chronic obstructive pulmonary disease, and lung cancer. Exposure in construction can also cause or exacerbate asthma.

Mining - Studies of coal miners have shown an increased risk for everything from bronchitis to pneumoconiosis - a chronic condition caused by inhaling coal dust that becomes embedded in the lungs, causing an abnormality of the lung tissue. About 2.8 percent of coal miners have evidence of coal worker's pneumoconiosis - also known as black lung disease.

Certain types of jobs can expose workers to unsafe substances that can irritate the lining of the lungs. Toxins associated with blue-collar workers' risk perceptions of lung condition:

Dust - Dust particles are generated by the disturbance of rocks, or fibers material and include those that arise from handling grain and cotton, as well as from mining, quarrying, tunneling, stone masonry, construction, and any process which breaks or separates solid material.

Fibers - Unlike most minerals that turn into dust particles when crushed, asbestos breaks up into tiny microscopic fibers that can float in the air for long periods of time. The inhalation of asbestos fibers may lead to a number of respiratory diseases, including malignant mesothelioma, asbestosis, lung cancer, pleural plaques, pleural thickening, and pleural effusion.

Gases - Many types of gases may suddenly be released during industrial accidents that may severely irritate the lungs. Chlorine, ammonia, sulfur dioxide, and nitrogen oxides are found at blue-collar jobs with high heat operations, such as welding, brazing, smelting, oven drying, and furnace work.

Most work-related lung diseases are caused by repeated and prolonged exposure, but even a significant, single exposure to an unsafe agent can damage the lungs. Blue-collar occupations that put workers at risk for lung function loss due to asbestos exposure on the job include:

A 72-year-old man originally from Minnesota saw a physician for increasing shortness of breath and worsening cough. He worked for 10 years at an automobile repair shop. He had smoked two or three cigarettes a day for 20 years but quit at age 40. At the age of 60, he was treated for suspicion of interstitial pneumonitis. Based on persistent abnormal chest x-ray images, he was diagnosed with accelerated asbestosis with progressive massive fibrosis. A lung biopsy was performed in order to determine whether the suspicious tissue is cancerous. Cancer cells found in the inner lining of the lung indicate Stage 0 non-small cell lung carcinoma. He was found to have significant airflow obstruction and required oxygen supplementation to help with breathing and getting more air into the lungs. Currently, he is undergoing surgery evaluation.

Asbestosis is a chronic lung condition caused by inhaling asbestos fibers. By the decidedly manual and physical nature of their work, auto mechanics are in danger of coming into contact with asbestos fibers. The use of asbestos in brakes and clutches releases potentially hazardous asbestos fibers into the air due to the act of grinding, and poses a distinct hazard to people involved in car repairs and to those in automotive repair and replacement workshops. Performing maintenance work on vehicles can endanger mechanics as they breathe the fibers in. When asbestos fibers are inhaled, they may get trapped into the lungs, regional lymph nodes, pleural cavity, or abdomen. The fibers accumulated in human tissue can cause inflammation and damage. Over time, this damage leads to multiple cellular processes such as inflammation, macrophage recruitment, cell proliferation, which can eventually develop into lung cancer, or other lung-related conditions including asbestosis. Tobacco use is known to increase risks caused by asbestos exposure.