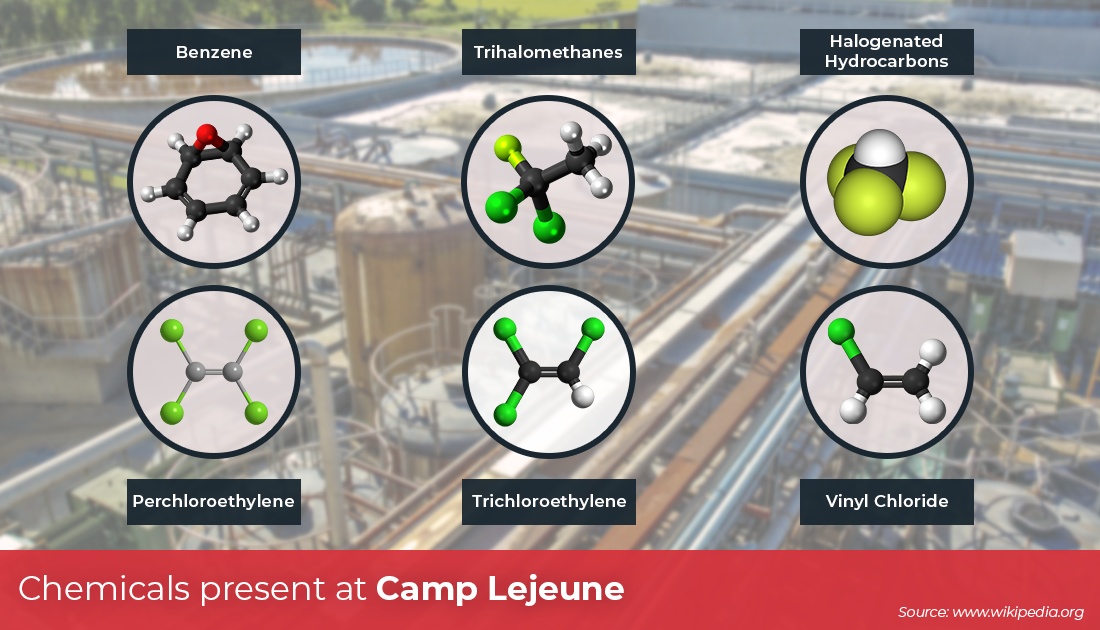 Chronic exposure to industrial solvents, benzene, and other chemicals during pregnancy is associated with low birth weight, an increased risk of childhood leukemia, and a greater incidence of birth defects such as spina bifida found a study released by the Centers for Disease Control and Prevention.

In the early 1980s at the Marine Corps Base in Lejeune, NC, it was discovered that three on-base wells were contaminated with the volatile organic compounds trichloroethylene (TCE), a metal degreaser, and perchloroethylene (PCE), a dry cleaning agent. The cancer-causing potential of PCE has been established through numerous epidemiological studies and conclusive evidence that have contributed to PCE's designation as a "probable human carcinogen" by the International Agency for Cancer Research (IARC) and "likely to be carcinogenic in humans" by the U.S. Environmental Protection Agency (EPA).

Environmental toxins are seen as posing risks during pregnancy. Pregnant women who resided at Camp Lejeune may have come in contact with hazardous contaminants and by doing so inadvertently exposed their fetuses. According to epidemiological studies, babies born to mothers exposed to toxic chemicals while pregnant are four times more likely to have serious birth defects and congenital anomalies than babies born to mothers who lived off-base.

Women who were exposed to various contaminants at Camp Lejeune need to better understand the association between their exposure and adverse pregnancy outcomes.

The following effects were seen in births from 1968 through 1985 of women exposed to dangerous chemicals at Camp Lejeune, according to the Agency for Toxic Substances and Diseases Registry:

The study also indicated a slightly elevated risk of childhood cancers including leukemia. The CDC has linked environmental contamination at Camp Lejeune to a number of sources including leaking underground storage tanks, industrial spills, and an off-base dry cleaning firm.

Veterans who served at Camp Lejeune for 30 days or more between 1952 and 1987 are eligible for cost-free healthcare from the VA.

We believe that those who have been put in harm's way by the negligence of another are entitled to justice. With over 20 years of handling toxic exposure cases, you can trust our team of lawyers to fight for the compensation you deserve.