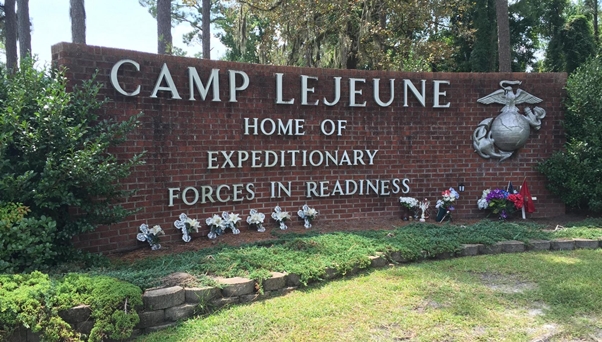 Perchloroethylene (PCE) - the primary contaminant in the Tarawa Terrace system - is a volatile compound introduced into the environment by human activity. State health officials warn that either inhaling or ingesting large amounts of PCE causes many types of cancer, including cancer of the cervix.

For decades, veterans, former reservists, and former National Guard members who served at Camp Lejeune have blamed their families' cancer and other ailments on exposure to harmful substances, and many accuse the military of covering it.

The contamination occurred from the 1950s through the 1980s, and health officials believe that as many as 1 million people have been exposed to toxic agents from multiple sources. The contaminants identified at Camp Lejeune are known to have an effect on the DNA of reproducing cells.

A mounting body of evidence indicates that exposure to environmental chemicals may contribute to the development and progression of cancer. The main key to preventing cancer is to limit the amount of harmful toxins that enter the body. Some of the common organic pollutants which have been noted to be of special concern come from naturally occurring deposits but also through the spillage of liquid wastes. For women, long-term exposure to certain chemicals that contained high levels of toxicity can potentially lead to more gender-specific problems such as cancers of the uterus, breast, and cervix - which is part of the female reproductive system.

These cancers have all been linked to environmental factors. For example, cervical cancer may be related to certain chlorinated solvents, including chlorinated volatile organic compounds such as perchloroethylene (PCE) - the primary contaminant of the Tarawa Terrace - located just outside the main gate of Camp Lejeune. The source of the contamination was the improper waste disposal practices at ABC One-Hour Cleaners, an off-base dry-cleaning facility.

PCE's potential to cause cancer has been established through sufficient epidemiologic studies that have contributed to its designation as "likely to be carcinogenic in humans by all routes of exposure" by the International Agency for Cancer Research.

Cervical cancer develops when abnormal cells in the lining of the cervix grow and divide in an uncontrolled manner. These cells can also invade nearby tissue or spread throughout the body. This cancer is very slow to progress and may take years for symptoms to be fully evident.

If you have qualifying service at Camp Lejeune and a current diagnosis of cervical cancer, we can help with your claim

As a part of the Caring for Camp Lejeune Families Act of 2012, qualifying veterans can receive disability benefits and medical care through the VA if they served on active duty at Camp Lejeune for at least 30 cumulative days between August 1, 1953, and December 31, 1987, even if they don't have a health condition that is presumed to be related to exposure.

Currently, women of the military community diagnosed with cervical cancer receive no presumptive disability compensation. However, women with qualifying service at Camp Lejeune and a current diagnosis of cervical cancer may be eligible for VA health and compensation benefits, if they have medical evidence showing a link between their current illness and exposure to hazardous contaminants. If you would like to discuss your specific situation with an experienced lawyer whom you can trust, do not hesitate to contact Environmental Litigation Group P.C. as soon as possible. We are available to help you investigate your options and advocate for you to the fullest extent of the law.