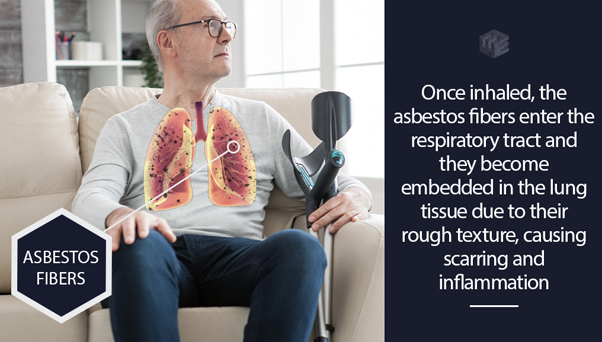 Once inhaled, the asbestos fibers enter the respiratory tract and they become embedded in the lung tissue due to their rough texture, causing scarring and inflammation. Inhalation of these fibers has been linked to many diseases, including lung cancer. Lung cancer due to asbestos exposure results in 4,800 deaths annually.

Exposure to asbestos increases the risk of lung cancer by as much as five times. For the purpose of treatment and prognosis, lung cancer is divided into two categories:

Non-small cell lung cancer (NSCLC) - the most common type of lung cancer, occurs when a cancer-causing agent such as asbestos, triggers the growth of abnormal cells in the lung. These cells grow out of control and eventually form a mass of tissue, called a tumor. As the tumor grows, it can block or narrow the airways, obstructing airflow and causing breathing difficulties. Eventually, tumor cells can spread to nearby lymph nodes and other parts of the body.

Histologically, NSCLC is divided into three types of cancers that originate from lung tissue:

Together, these subtypes of NSCLS make up the majority of lung cancers, accounting for 84% of all lung cancer diagnosis.

The risk of lung cancer is increased by inhaling asbestos fibers, particularly in high doses or over long periods of time. Overall, people who were exposed to asbestos as part of their occupations are two times more likely to develop lung cancer than unexposed workers.

When considering if lung cancer was caused by exposure to asbestos, medical professionals use a number of diagnostic criteria, including:

The most common signs of lung cancer are coughing up blood, and difficulty breathing. These symptoms often represent advanced-stage lung cancer. If you have symptoms of or risk factors for lung cancer, you should call your doctor and request to be seen as soon as possible. Tell him/her about all circumstances, duration, and intensity under which the asbestos exposure occurred and ask for recommended screenings. Screenings have been proven effective in detecting early-stage non-small cell lung cancer. Most lung cancer patients have their diagnosis made by X-ray imaging. By studying the X-ray images, your doctor will look for any abnormal areas in the lungs.

After someone is diagnosed with non-small cell lung cancer, doctors will try to figure out if it has spread, and if so, how far. The TNM (tumor-node-metastasis) staging system from the American Joint Committee for Cancer Staging and End Results Reporting is an internationally accepted system used to characterize the extent of cancer.

The TNM staging is based on imaging findings and serves as an indicator of prognosis. The system takes into account the following key pieces of information:

Metastatic involvement - the spread of cancer cells from the site of origin to another part of the body, as follows:

We at Environmental Litigation Group, P.C. are proud of our commitment to ensuring our clients receive the maximum compensation

If you worked in an industry such as shipbuilding, manufacturing, construction, mining, milling, particularly between the 1970s-90s, we encourage you to seek medical advice and contact our team as soon as possible. If you or a loved one is suffering from asbestos-related lung cancer and would like to bring a claim for compensation, call us today for a free, no-obligation case evaluation. At Environmental Litigation Group we've handled a vast number of cases regarding asbestos-related diseases. Simply tell us about your current condition, work history, and other potential points of exposure, and our team can do the rest.