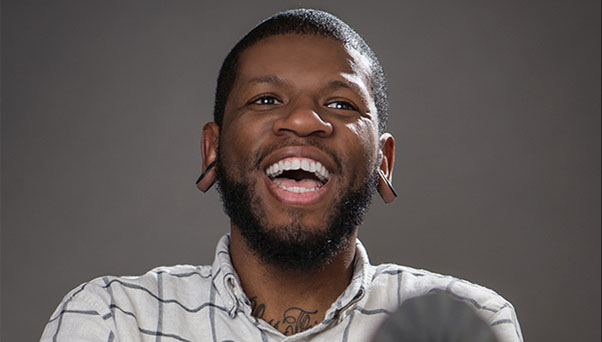 Quincy Jones' suffering from peritoneal mesothelioma may appear uncommon due to his young age. Unfortunately, the comedian's diagnosis is far from being unique, as mesothelioma has been discovered in numerous other young persons as well, despite the short latency period of the disease.

Quincy Jones, a 32-year-old comedian, was diagnosed with stage IV peritoneal mesothelioma in July 2015. Born in Seattle, he moved to Los Angeles in 2012, aspiring to perform comedy as a career. However, Jones' diagnosis did not discourage him from pursuing his dream - on the contrary, it fueled his ambition and motivated him to do a comedy special in order to raise awareness regarding mesothelioma, as well as to secure his legacy.

Shortly after having discovered Quincy Jones was suffering from cancer, his friend and fellow comedian Nicole Blaine and her husband, Mickey, decided to help with the production of the show and thus launched a Kickstarter campaign aimed at raising funds for Jones' stand-up special. Even though their initial target was around $5,000, the sum eventually raised to over $50,000. Additionally, Quincy Jones was offered a $15,000 check by Ellen DeGeneres, who invited him on her talk show soon after finding out about his diagnosis. It was also during DeGeneres' show that the comedian was surprised with the news that HBO agreed to air his special performance. Jones' one-hour comedy show, titled Burning the Light, was subsequently broadcast on HBO on April 4, 2016.

Despite his tragic prognosis of one year, Quincy Jones' attitude towards his disease remains positive and he is bound to keep fighting cancer with laughter and a light-hearted approach to his diagnosis. When asked how he planned to integrate a subject as delicate and serious as cancer into a comedy show, Jones stated that he believed it is crucial "to be able to laugh at some things that aren't traditionally funny" and that "sometimes you have to make the dark stuff lighter, make it a little more palatable".

During various interviews, Jones also revealed that his initial reaction after being diagnosed with peritoneal mesothelioma was to ignore his condition, unable to accept the fact that he might pass away within the following year. The comedian had to go through multiple tests and examinations over a period of approximately six months in order to receive an accurate diagnosis. Nevertheless, soon after stage IV mesothelioma was confirmed, Jones decided to undergo chemotherapy, the only treatment available for his disease, which had unfortunately entered its advanced phases. Quincy Jones also talked about the symptoms he had been experiencing prior to his diagnosis. He suspected something was wrong when doctors discovered that his stomach was distended, requiring frequent medical interventions to drain the fluid which kept accumulating.

Filing a Claim for Mesothelioma Victims and Family Members

Quincy Jones' suffering from peritoneal mesothelioma may appear uncommon due to his young age, considering the fact that, in the majority of cases, this form of cancer tends to develop within a period of 20 to 50 years of exposure to asbestos. Unfortunately, the comedian's diagnosis is far from being unique, as mesothelioma has been discovered in numerous other young persons as well, despite the short latency period of the disease.

At the moment, the inhalation or swallowing of asbestos fibers represents the only known major risk factor for mesothelioma, a very rare and aggressive form of cancer affecting the outer lining of the lungs, stomach, heart, as well as testicles. However, the circumstances of asbestos exposure are not always clear. Although work environments such as construction sites, factories, power plants, and shipyards are most commonly responsible for exposure to asbestos, it can also have other causes. Consuming contaminated water, inhaling large amounts of asbestos particles in childhood or being in contact with asbestos-containing or asbestos-tainted products over a prolonged period of time can lead to the development of malignant diseases as well.

If you or a family member has been diagnosed with mesothelioma you might be eligible for compensation. Due to the severity of the disease, these claims tend to be resolved quickly but they require the help of an attorney specialized in handling cases of asbestos-exposure. Environmental Litigation Group, P.C, has an experience of over 25 years in the field and can help guide you through the entire process. Contact us for more information.