What types of fire are extinguished with AFFF? 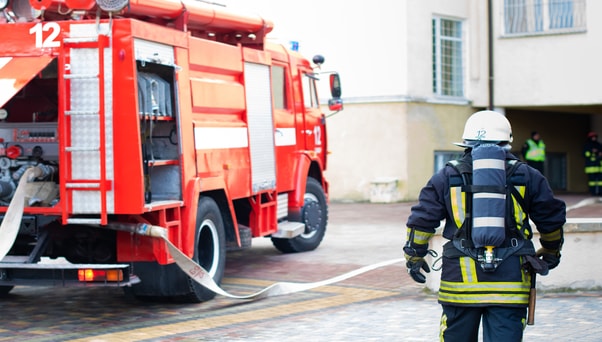 Class B fires are typically extinguished by using AFFF, which are caused by flammable liquids such as alcohol, ether, oil, gasoline, and grease. In the military, AFFF is mostly used to put out jet fuel and petroleum fires that can easily occur on ships and aircraft, since the close proximity of people, fuel, and munitions can be particularly dangerous.

As a very effective fire suppressant that has been used by both civilian and military firefighters since 1970, aqueous film-forming foam, commonly known as AFFF, has the purpose of extinguishing class B fires. It contains primarily water, but also sodium alkyl sulfate and fluorosurfactants such as perfluorooctanoic acid or perfluorooctanesulfonic acid. The former chemicals, known as PFOA and PFOS, are carcinogenic to humans and thereby pose a great health danger to the people who use AFFF on a regular basis. It is worthy of note that AFFF was initially developed by the U.S. Navy and has been the go-to fire suppressant for the majority of firefighters since then. However, because it contains PFOA and PFOS, civilian and military firefighters who employ it need to keep a close eye on their health, as they are at high risk of developing serious diseases such as bladder cancer, kidney cancer, and prostate cancer as a consequence of frequent exposure.

What substances cause the fires that are put out with AFFF?

Class B fires are typically extinguished by using AFFF, which are caused by flammable liquids such as alcohol, ether, oil, gasoline, and grease. Nevertheless, in the military, AFFF is used to put out jet fuel and petroleum fires stemming mostly from aircraft. The following are the substances and chemicals that may cause a class B fire:

It is important to note that grease and cooking oil are not deemed as a source of class B fires, as they have their own category. Class B fires can ignite by heating the chemical up to extreme temperatures or with a mere spark. For instance, this is why it is forbidden to smoke when filling your car up with petrol. If you are storing flammable liquids of any kind, you need to be prepared for dealing with a potential fire.

How is AFFF used in the military?

In the military, AFFF is mostly used to put out jet fuel and petroleum fires that can easily occur on ships and aircraft, since the close vicinity of people, fuel, and munitions can be particularly dangerous. Nevertheless, exposure to the PFOA and PFOS that stems from the employment of AFFF is very harmful, as it can lead to the development of serious diseases over the years. The following are the diseases and health issues that can occur as a consequence of exposure to PFOA and PFOS in military firefighters and trainees who use AFFF on a regular basis:

If you are a veteran who was using AFFF while on active duty and subsequently came to struggle with one of the diseases above, we strongly encourage you to seek financial compensation for your injury. The VA provides every veteran whose health was affected by toxic exposure with disability compensation, which a lawyer who specializes in this area of practice can help you obtain. Applying for disability compensation with the help of a lawyer is essential, as they will be able to obtain the maximum sum of money you are eligible for from the VA on your behalf. If you choose to seek compensation on your own, you will most likely not end up receiving the actual amount of compensation you truly deserve for your injury. Furthermore, a lawyer who specializes in toxic exposure will be able to help you determine whether you were exposed to other hazardous agents while you were serving in the military, which will qualify you for even more financial benefits from the VA.

We provide quality legal assistance to veterans injured by AFFF

Our law firm, which specializes in toxic exposure cases, has been offering legal assistance to veterans injured by harmful substances in the military since 1990. Thereby, if you came to struggle with a disease as a result of using AFFF while on active duty, we advise you to reach out to our attorneys, who will gladly help you recover the financial compensation you deserve for your diagnosis if you meet the eligibility criteria.

While complex and tedious, the legal process will require minimal involvement on your part, as you will only have to send your lawyer your military records, which you must retrieve, and your medical records, documents that will be used as evidence to support your claim, which will be filed with the VA, as well as with any other liable party. Eventually, you may receive the sum of money you are entitled to, which will make superior healthcare and treatment affordable to you.