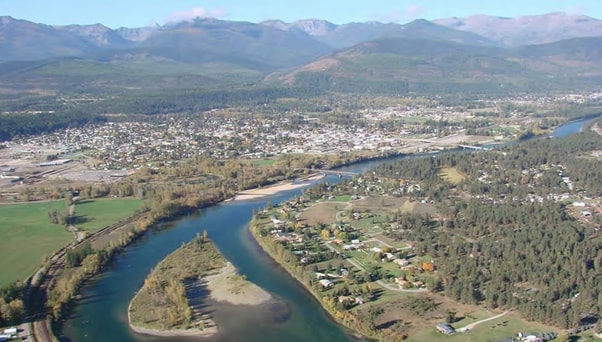 When inquired, W.R. Grace executives would insist that the visible dust, which was invariably polluting the air in manufacturing facilities and around the mining site, was just "nuisance dust", although they were well-aware of both the existence of asbestos and the harmful effects of exposure.

Negligence and apathy were without a doubt inherent to companies that would employ asbestos despite being well-aware of the hazardous effects exposure could have on human health. From asbestos products manufacturing plants to oil refineries and textile mills, approximately 200 such companies were operating throughout the United States during the past century. Their incessant use of asbestos endangered the lives of over 11 million people between 1940 and 1978, as employees would be breathing in toxic fibers day by day in the workplace. Regrettably, a significant portion of them subsequently developed life-threatening diseases such as:

While the activity of each asbestos company had a terrible impact on both employees' and residents' health, the aftermath of W.R. Grace's vermiculite mining operations which took place in Libby, Montana was by far the most shattering. Vermiculite, a mineral with excellent insulating properties, occurs in close proximity to asbestos deposits in the earth, which makes contamination inevitable. As a consequence of the five decades of massive vermiculite exploitation W.R. Grace was responsible for, approximately 400 residents lost their lives, and over 1,700 are currently suffering from debilitating illnesses.

A brief history of vermiculite mining in Libby

Even though it was only in 1963 that W.R. Grace began mining vermiculite in Libby, a quarry had been known to exist since 1881, when it was found by gold miners. Vermiculite exploitation ensued approximately 40 years later. At the time, the primary company conducting mining operations in town was Zonolite Company - a manufacturer of insulation from Peru which had been in business since 1854. W.R. Grace purchased the vermiculite mines, as well as a processing mill, from Zonolite Company in 1963. Soon after, Libby became the leading producer of vermiculite worldwide, with 80% of the global supply originating from the town's mountains. 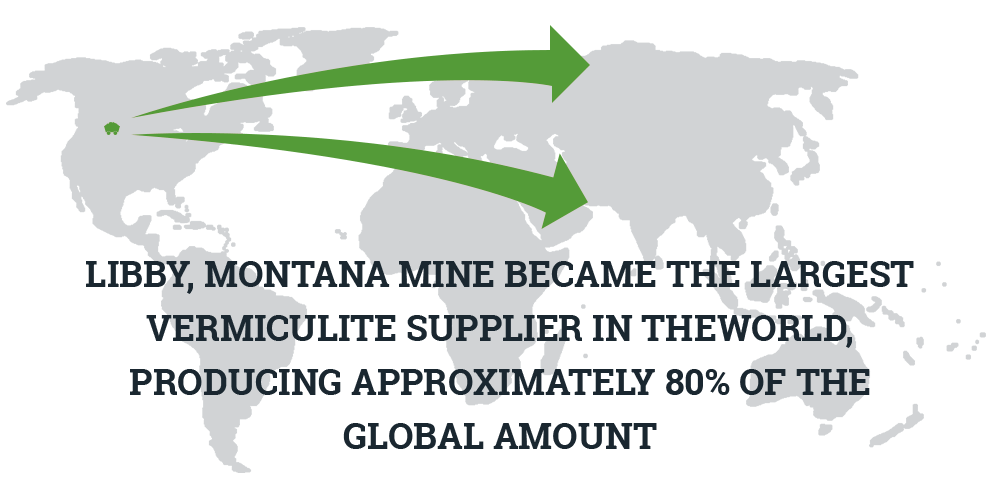 However, the company's unprecedented success was soon to be overshadowed by a grim fact the executives had been striving to conceal from both their workers and the consumers: the vermiculite mined in Libby was contaminated with tremolite asbestos.

Although several employees of the former Zonolite Company had been diagnosed with pulmonary diseases as a result of asbestos exposure, the executives of W.R. Grace and Company claimed they were "unaware of the hazards of mining and milling vermiculite" upon purchasing the business. Throughout the following decades, over 400 residents lost their lives to malignant diseases, while 3,000 others were severely affected by exposure to high levels of asbestos, as vermiculite was present in numerous public locations in town, including playgrounds and baseball fields.

With over 200 employees, many of whom were Libby residents, W.R. Grace would produce up to 200,000 metric tons of vermiculite per year until 1990, when the Zonolite Mountain mine was closed due to the unprecedented health hazard it generated. In addition to attic insulation, Davison Chemicals and Performance Chemicals - the company's divisions - also manufactured a series of other asbestos-containing products, including:

Vermiculite was processed in "dry mills" until well into the 1970s, which would generate so much toxic dust in the air that workers could not see their own hands on the brooms. Although miners were inhaling plenty of asbestos as well, people responsible for processing vermiculite were at highest risk, since the concentration of airborne fibers in these facilities was by far the greatest. Over 5,000 pounds of asbestos would be released in the air every day, according to W.R. Grace estimates. The mine site was permanently covered with deadly white dust and when the wind blew from the east, it would carry a good part of it to residential areas.

To make matters worse, Libby would regularly receive leftover vermiculite from W.R. Grace, which it would incorporate in the soil of public locations such as baseball fields, playgrounds, gardens, roads, and parks. Additionally, asbestos-containing slag was residing in the running tracks and junior baseball pitches of four schools, whereas townsfolk also recount how children would thoughtlessly play in the piles of vermiculite scattered around. The infamous Zonolite attic insulation is estimated to lurk in over 35 million public and residential buildings in the U.S.

Over 1,000 asbestos victims benefited from a $24 million settlement

In January 2017, a $24 million settlement was reached between Libby residents whose health was tremendously affected by exposure to asbestos-contaminated vermiculite and the State of Montana. Former employees of W.R. Grace and Company had not been formally informed regarding the hazards vermiculite mining entails. The state denied liability, claiming that it had no legal obligation in this respect. Nevertheless, 1,026 asbestos victims were awarded a total of $24 million as financial compensation for their injuries.

Both former W.R. Grace and Company workers and some of their family members received compensation, as secondary exposure to asbestos had also been a common occurrence in the community. The settlement issued from 100 asbestos lawsuits filed by Libby residents and was paid in two installments - the first represented 60% of the entire sum, while the last was received by asbestos victims by July 31, 2017. Additionally, two new asbestos trust funds were established by Kalispell law firm, whose 826 claimants will be offered $18 million, and by Great Falls law firm, whose 261 clients will be awarded $6 million.

W.R. Grace and Company has been under bankruptcy protection since April 2, 2001. Although this is the most recent settlement reached between Libby residents and the State of Montana, it is not the first. In 2011, over 1,300 asbestos victims received $43 million as compensation, a major settlement that was approved by a district court judge.

Denouement: medical experts say the health effects of exposure to the deadly mineral could last another generation or two

After 19 years, the massive asbestos cleanup of Libby, Montana - the site of one of the worst cases of widespread asbestos exposure in recorded history, is coming to an end. However, Libby still feeling the effects of America's worst man-made environmental disasters.

Some 8,100 properties were checked for asbestos. Asbestos contamination has been removed from 3,000 sites, including businesses, yards, homes, schools, parks and other contaminated areas. More than $600 million were invested in Libby's massive asbestos cleanup and in 2008, W.R. Grace was ordered to contribute with $250 million to EPA's asbestos abatement efforts. At least 400 people have died from diseases caused by asbestos, but health officials suspect the number to be much higher.

For over two decades, Environmental Litigation Group, P.C. has provided essential legal assistance, counseling, and advocacy for those exposed to asbestos and other toxins in the workplace or other environmental settings. If you receive the diagnosis of a noncancerous disease, we will need to do more testing - chest X-rays, breathing, and blood tests - done at our medical facility in Birmingham, Alabama, where you will be accurately diagnosed. 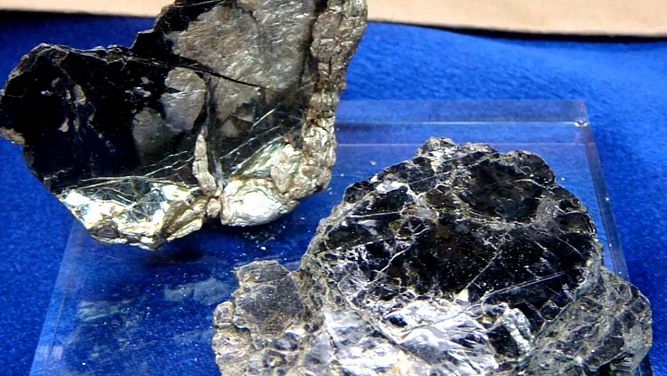 Similar to many other companies that could no longer keep up with compensating employees injured by workplace asbestos exposure, the vermiculite manufacturer set up the W.R. Grace Asbestos Settlement Trust after filing for bankruptcy protection in 2008. The company's asbestos trust fund has $1.8 million to pay out to former workers who are now suffering from asbestos-related diseases.

With the assistance of a lawyer specialized in asbestos exposure cases, former W.R. Grace employees diagnosed with lung cancer, asbestosis or mesothelioma can easily recover the compensation they deserve.

These awful diseases have been accountable for the death of approximately 400 Libby residents so far, while over 1,700 others are currently struggling with the health consequences of occupational or environmental asbestos exposure. Approximately 10% of the town's population perished following the disaster and new cases will likely continue to emerge for several more years, since asbestos-related illnesses have a long latency period.

The tragic fate of Libby residents is by no means a closed chapter. It should constantly serve as a grim reminder of what can happen when convenience and financial interest outweigh safety concerns and the wellbeing of others.