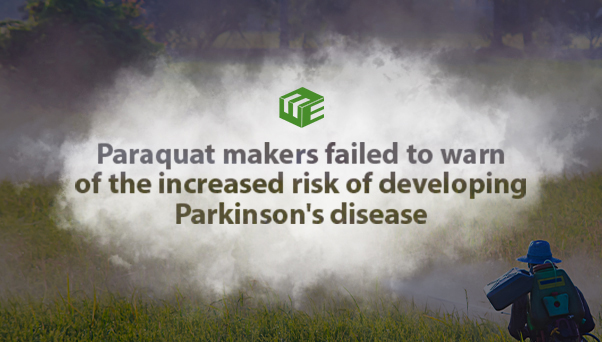 Studies showing that paraquat greatly increases the risk of a person developing Parkinson's date back years. Paraquat manufacturers should have issued warnings about the link between the two. Instead, thousands of claims are now being filed by individuals who used paraquat regularly and were diagnosed with Parkinson's.

As the dangers associated with paraquat become more well-known, people are filing claims for the injuries they have sustained. Manufacturers across the country are responsible for warning consumers of any risk their products may pose. Unfortunately, makers of paraquat herbicide failed to do so. Due to this negligent behavior, the companies that manufactured paraquat can be held liable for any injuries or death their products have caused.

The legal team at Environmental Litigation Group P.C. is now evaluating legal claims on behalf of those who developed Parkinson's disease due to the herbicide's use.

Science supports your claim that paraquat exposure caused you the development of Parkinson's disease:

People who used the weed killer paraquat put their entire communities at risk simply because they did not know the dangers. Unfortunately, well-meaning farmworkers, herbicide applicators, chemical mixers, and tank fillers may incorrectly assume that simply because a chemical is made available is safe to use.

Parkinson's disease is one of the most concerning risks associated with paraquat exposure. Unfortunately, the manufacturers of paraquat-based herbicides have failed to ensure that farmworkers and others exposed to the weed killer were adequately warned about the serious health risks associated with the herbicide.

Several claims have been filed against the paraquat manufacturers alleging the following:

Because the manufacturer failed to disclose information about the link between Parkinson's disease and paraquat exposure, many farmers and agricultural workers developed severe brain disorders after years of spraying the toxic herbicide. Even when safety precautions provided by the manufacturers were followed, these workers faced high risks from handling, transporting, mixing, or applying the weed killer.

The legal team at Environmental Litigation Group, P.C., reviews claims for farmers, herbicide applicators, chemical mixers, and tank fillers exposed to paraquat and later diagnosed with Parkinson's disease. With over 25 years of experience in providing quality legal assistance to people injured by toxic exposure, our legal experts can hold the manufacturers of paraquat-based herbicides accountable for the harmful effects of their products.

If you have been exposed to paraquat anywhere in the United States, contact one of our experts at Environmental Litigation Group, P.C. By filing a claim, we can't reverse your diagnosis, but we can help you recover proper financial compensation to improve your quality of life.