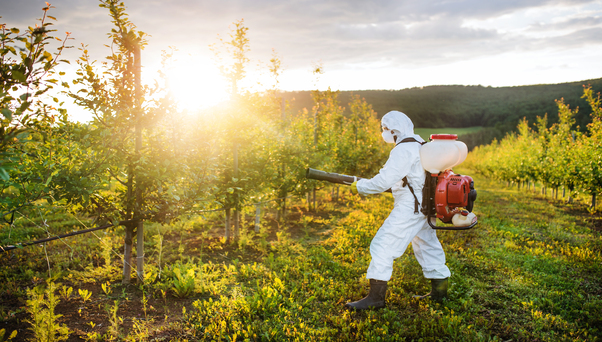 Most farmers who cater to baby food manufacturers use dangerous pesticides on their crops, which inevitably end up in these products. Exposure to common pesticides, such as dimethoate or chlorpyrifos, during the first year of life, is associated with a moderately higher risk of autism in children, according to medical studies.

The purpose of pesticides is to control pests and disease carriers such as mosquitoes, ticks, rats, and mice. They are also meant to destroy weeds and grasses that hinder the growth of crops. Roughly 1 billion pounds of conventional pesticides are used by agricultural workers nationwide every year. What is unsettling is that American farmers are allowed to use 72 pesticides that have been banned or that are being phased out in the European Union. The reason why the use of these substances is no longer permitted there is that they pose a too great danger to the health of consumers, especially to developing children.

There are multiple types of pesticides, depending on the purpose of these chemicals, such as:

Exposure to pesticides during early childhood poses a danger to brain development, contributing to the development of autism spectrum disorders such as childhood disintegrative disorder, Kanner's syndrome, pervasive developmental disorder, and Asperger's syndrome. This is because, like heavy metals, pesticides act as neurotoxins once they enter the bloodstream of children, being able to cross the blood-brain barrier and reach the cerebral matter. The presence of both heavy metals and pesticides in baby food can result in devastating consequences for the neurodevelopment of a child, as arsenic, cadmium, lead, and mercury are also neurotoxins.

Three categories of pesticides have been found by medical researchers to contribute to the development of autism in children - organophosphates, carbamates, and organochlorine. It is worthy of note that fumigants, which are volatile, hazardous substances used by farmers to destroy insects, rodents, and weeds, are also linked to autism. Fumigants induce toxicological mechanisms that take a heavy toll on most tissues in the body, including the brain.

Because pesticides directly target the nervous system, they can prevent the normal neurodevelopment of infants and toddlers. Insecticides are particularly dangerous, as they kill pests by destroying their nervous system, having a neurotoxic effect in mammals, too, including humans. When they are present in the blood in high concentrations, pesticides induce a cholinergic crisis in the body. The following are some of the most dangerous pesticides to developing children, which they can be exposed to by ingesting toxic baby food:

Furthermore, researchers found the pesticides below to increase the risk of autism in children as follows:

What about organic pesticides?

Unfortunately, few agricultural workers practice organic farming in the United States at the moment. Throughout the country, there are approximately 5 million organic acres of farmland, which represents roughly 1% of the over 900 million acres of farmland in America. Organic pesticides come from natural sources like plants and minerals, so they are relatively harmless and have not been found to contribute to the development of autism. Some of the most common and effective natural pesticides are:

A sliver of hope is that organic agriculture is becoming - slowly - more and more popular, as there was a 17% increase in organic farming practices between 2016 and 2019. In 2019, there were 16,500 certified organic farms across the United States. The popularity of organically grown fruits, grains, and vegetables is increasing due to their nutritional and health benefits. However, the downside of organic farming is that, even though it promotes biotic abundance and richness, soil carbon, and profitability, conventional farms usually produce higher yields.

For over two decades, our attorneys and their legal team have been dedicating their endeavors to helping victims of toxic exposure recover the money they deserve as compensation for their often irreversible health problems from the liable companies. If you fed your infant or toddler baby food with heavy metals and they came to struggle with a form of autism, we encourage you to contact our law firm. You will only have to provide us with evidence of having given your child toxic baby food, their medical records stating their diagnosis, and other easy-to-obtain documents.

After we collect all the necessary documents and records from you, your involvement in the legal process will be minimal, so you can go on with your life as usual until the resolution of your claim. Our resourceful attorneys will file a claim with the responsible baby food manufacturers on behalf of your child. In the end, you will receive the maximum compensation you are entitled to for your child's suffering. Lastly, it is important to know that we work on a contingency fee basis, which means that you will not have to pay us anything unless we recover money for you.