The link between asbestos exposure and colorectal cancer is valid and medical research suggests that the risk of developing colon cancer as a result of asbestos exposure is as high as that associated with other lung disorders and cancers, such as mesothelioma and lung cancer. Despite the challenging nature of colorectal cancer cases, which require the utmost attention to detail, our attorneys are willing to provide you with the legal assistance you need.

With a colorectal cancer diagnosis, you have immediate eligibility and our staff and attorneys will prioritize your cases for expedited processing. You will not be required to travel and a family member will be able to handle the paperwork on your behalf.

Lung diseases and cancer is not the only health consequence asbestos exposure is responsible for. There are numerous other organs in our body asbestos fibers can attach themselves to after inhalation or ingestion, such as the colorectal area, which includes the colon and the rectum.

Once embedded in the colorectal tissue, asbestos fibers will gradually cause inflammation and scarring, which will eventually lead to the growth of a malignant cancerous tumor.

People whose job involved handling raw asbestos or asbestos-containing products, as well as those who worked in close proximity to the former, are at high risk for developing colorectal cancer due to asbestos exposure.

While the ingestion of toxic asbestos particles is most likely to result in this illness, inhalation also poses a considerable threat, since asbestos fibers can easily travel through the body and reach the colorectal area, either via the bloodstream or the lymphatic system. Colorectal cancer which develops as a consequence of asbestos exposure generally takes between 10-50 years to ensue. For this reason, people who had high-risk asbestos exposure occupations between the 1930s and the 1980s should keep a close eye on their health.

At the moment, colorectal cancer is the fourth most common malignant disease in the U.S. and the second cause of cancer-related death in the country. By the end of 2018, over 50,000 people will have lost their lives to it. The lifetime risk of receiving a diagnosis of colorectal cancer is 1 in 23. Some of the risk factors for colorectal cancer are being over the age of 50, excessive alcohol consumption, tobacco use, obesity, a low-fiber, high-fat diet, as well as inflammatory bowel disease. However, individuals with a history of occupational asbestos exposure are also susceptible to developing it, as asbestos is a highly carcinogenic mineral.

People who come to suffer from a disease as a consequence of occupational asbestos exposure rarely experience symptoms initially. It is for this reason that the majority of cases are diagnosed when cancer has already spread to adjacent organs and is therefore very difficult to keep under control. Adenocarcinoma is the most common form of colon cancer. When colorectal cancer metastasizes to distant organs, the 5-year survival rate drops to a dramatic 11%. The most common symptoms of colorectal cancer, regardless of what caused it, include:

Although more scientific evidence is necessary to formally recognize the causal relationship between asbestos exposure and colorectal cancer, several medical studies have already found significant proof in this respect. For instance, a 1994 study involving insulators who had been exposed to asbestos on the job for nearly 20 years discovered elevated rates of colorectal cancer among the participants. Accordingly, 17 out of the 632 individuals who partook in the study developed colorectal cancer due to workplace asbestos exposure, whereas researchers had expected only 5 cases at the beginning.

Diverticulosis, a disease that might precede or co-occur with peritoneal mesothelioma

Also known as diverticulitis or diverticular disease, diverticulosis is a condition that occurs when pouches develop in the walls of the colon. While these pouches are generally small, ranging from 5 to 10 millimeters, they can gradually grow in size. It is important to note that, in the case of diverticulosis, inflammation does not take place within the pouches. However, when it does, the disease is referred to as diverticulitis. Another noteworthy aspect is that diverticulosis is asymptomatic. When the patient begins experiencing distressing symptoms, the condition is usually called diverticular disease.

Some of the most common symptoms of diverticulitis and diverticular disease include:

People over the age of 40 are at the highest risk of developing diverticulosis. Nevertheless, the majority of cases (74%) take place in individuals over the age of 80 in the U.S. According to statistics, diverticulosis eventually turns into diverticular disease in 1 out of 4 patients. Some of the risk factors for this disease are a low-fiber diet, aging, smoking, extreme weight loss, genetic predisposition, a sedentary lifestyle, chronic constipation, the use of anti-inflammatory medication, as well as connective tissue disorders such as Marfan syndrome.

While the causes of the disease are not completely clear to medical professionals at the moment, diverticulosis is believed to develop as a result of high pressure inside the colon. High pressure may affect the weak areas of the colon over time, which promotes enlargement. The most serious complications of diverticulosis are:

Roughly 25% of people who suffer from diverticulosis experience complications.

It is not impossible for diverticulitis or diverticular disease to precede peritoneal mesothelioma either, since both imply severe inflammation of the large intestine, which is close to the mesothelium. Furthermore, these benign diseases might initially be diagnosed in someone who, in reality, suffers from peritoneal mesothelioma, as misdiagnosis is very frequent among victims of asbestos exposure. Due to the similar symptoms both diverticulitis/diverticular disease and peritoneal mesothelioma are associated with, mistaking the latter for the former is very easy. For this reason, we strongly encourage you to seek at least a second opinion if you have a history of asbestos exposure and experience alarming symptoms.

Metastasis to other organs

Metastasis to other organs

Regrettably, misdiagnosis is extremely common among victims of workplace asbestos exposure, the more so when other afflictions than lung disease are concerned.

Due to the latency period of several decades and lack of knowledge when it comes to the correlation between asbestos exposure and colorectal cancer, the disease is challenging to diagnose as many doctors do not check the lungs thoroughly and specifically do not look for asbestos fibers.

However, if you struggle with colorectal cancer and have a history of occupational asbestos exposure, a tell-tale sign that the former is the result of the latter is the presence of asbestos fibers in your lungs.

Interestingly, most individuals develop colorectal cancer because the asbestos fibers they breathed in during their jobs travel through the body to the area in question. Therefore, underlying lung disease is almost the norm for people who come to have colorectal cancer following asbestos exposure.

If you were diagnosed with both colorectal cancer and a type of lung disease, such as pulmonary fibrosis or COPD, you are eligible for financial compensation, which our lawyers – who specialize in asbestos cases – will help you recover. Supposing you only have a colorectal cancer diagnosis, but were also exposed to asbestos in the workplace, undergoing a chest X-ray is crucial, as this test will show the asbestos fibers in your lungs and subsequently help you receive your second asbestos-related diagnosis.

If you suffer from colorectal cancer and lung disease as a consequence of occupational asbestos exposure, we strongly encourage you to immediately talk to one of our staff members to see if you qualify for asbestos trust funds compensation. With over 25 years of professional experience, our lawyers will gladly assist you with recovering compensation from asbestos trust funds that were set up for victims and family members, which can range between $3,000 to $400,000, depending on factors such as the company you worked for, the severity of your diagnosis, how long you were employed, as well as the financial resources the asbestos trust fund we can file your claim under.

Veterans who have a colorectal cancer diagnosis that is the consequence of asbestos exposure during active service are also entitled to compensation. They will have to send our attorneys their military records, which they must retrieve, and their medical records. These documents will be of tremendous help to our legal team when assessing your case to determine whether you qualify for compensation as a veteran. For additional information, feel free to give us a call and we will thoroughly answer any questions you might have. Our standard fee is a 40% contingency fee. That means we only collect this fee when we are able to collect compensation for you. 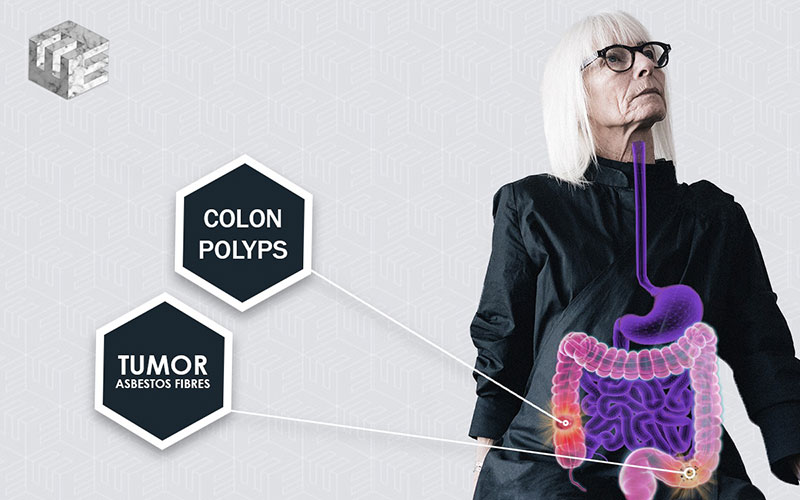 People who handled asbestos themselves and those who worked surrounded by asbestos dust are not the only demographic at risk for developing colorectal cancer.

Since asbestos companies were lacking industrial hygiene, thereby not requiring employees to change clothes at the end of the day, asbestos workers would often carry toxic asbestos fibers home, unknowingly endangering the health of their families.

Women would typically breathe in asbestos when laundering their husbands’ work clothes, whereas children would be exposed to the asbestos mineral upon greeting their fathers.

Thus, if you have someone in your family who worked with asbestos during the last century and now struggles with colorectal cancer and lung disease, please contact our lawyers at your earliest convenience. With the help of a vast database and a resourceful team, they are bound to obtain the optimal results for your case, regardless of how complex the endeavor might prove to be. The money recovered by our lawyers, you or your family members will receive, and can further help with higher-quality treatment and healthcare.

If you lost a family member to asbestos colorectal cancer, our lawyers will help you recover compensation on their behalf

There are numerous reasons why a person injured by occupational asbestos exposure would refuse or postpone seeking financial compensation during their lifetime, such as poor health and fear of a complex, endless legal process. Fortunately, while money will never be able to replace the loss of a dear one, you can recover compensation on behalf of a family member who died of asbestos-related colorectal cancer by filing a wrongful death claim with the help of our specialized lawyers. Because the money you will receive also comes from asbestos trust funds, the process requires no litigation and is substantially faster.

The only documents you will need to provide are their employment and medical records, after which one of our attorneys and our staff will promptly take over. Their primary area of practice is toxic exposure cases and so far, they have recovered over $1.4 billion for asbestos victims and their family members. Contact us today and we will shortly put you in touch with one of our skillful lawyers handling colon cancer claims due to asbestos exposure.

Our legal process in a colorectal cancer case

Asbestos exposure in the workplace can significantly increase your chances of developing colorectal cancer, asbestos fibers will travel through your body from your lungs or abdomen.