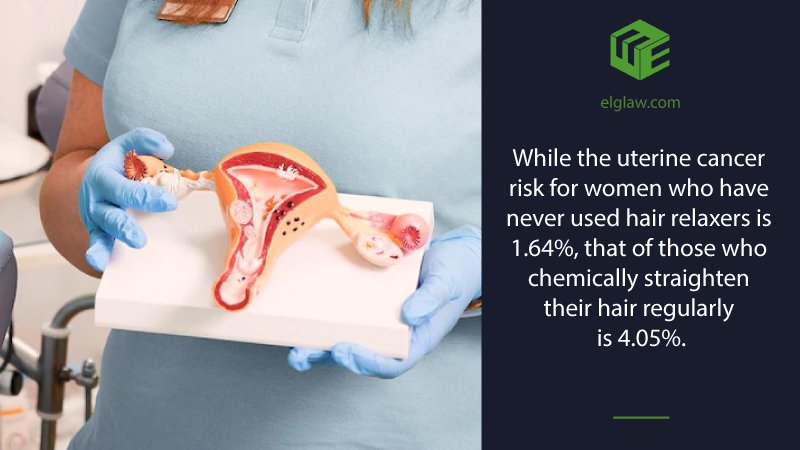 Every year, nearly 66,000 women in the U.S. develop uterine cancer, also known as endometrial cancer. While the disease is most common after the age of 50, it can occur earlier in women who regularly use chemical hair relaxers, the majority of whom are Black. Since these products abound in endocrine-disrupting chemicals such as formaldehyde and phthalates, it should come as no surprise that frequent use can result in uterine cancer, as this disease is usually the consequence of having a high level of the hormone estrogen. Over the past decades, uterine cancer incidence has been on the rise across the country, especially among Black women, and one of the contributors might be the use of chemical hair relaxers. These products are usually marketed to this demographic and, unsettlingly, also to children. If you developed uterine cancer due to using hair strengthening products, we encourage you to contact our skilled attorneys, as you might be entitled to financial compensation.

A recent study by the National Institutes of Health followed 33,497 women over a period of eleven years to determine whether their use of various hair products, such as dyes, bleach, and perms, can influence their uterine cancer risk. It was found that the participants who reported frequent use of hair straightening products – more than four times in the previous year – were more than twice as likely to develop uterine cancer than those who did not use such products. While the uterine cancer risk for women who have never used hair relaxers is 1.64%, that of those who chemically straighten their hair regularly is 4.05%. Roughly 60% of the women who reported using hair relaxers identified as Black, according to the study, which was published in the Journal of the National Cancer Institute.

By 2030, the annual number of uterine cancer cases is expected to reach 122,000. The disease will eventually become the third most prevalent cancer among women, according to experts, who believe it will even displace colorectal cancer. Some of the chemicals in many popular brands of hair relaxers that have a strong association with uterine cancer are:

According to a study from the International Journal of Environmental Research and Public Health, exposure to endocrine disruptor compounds at critical windows of early development, such as puberty, has the most dramatic impact on later life cancer development. Researchers evaluated the connection between uterine cancer and bisphenol A. They concluded that there was a correlation between the increase of bisphenol A level in the environment and the incidence of malignant tumors in humans. In a study where the ability of the chemical to impact human estrogen receptor binding and protein and cell proliferation was evaluated, bisphenol A was able to bind to the human uterine estrogen receptor.

Finally, cadmium, a heavy metal that might lurk in hair strengthening products, is also linked to uterine cancer development. Women are at greater risk of cadmium accumulation, as the cadmium levels in their blood and urine are significantly higher than in men due to their lower iron levels. Although it accumulates mostly in the lungs, kidneys, and liver, cadmium is also retained in the reproductive organs. Due to the endocrine-disrupting properties of the metal, it has been suggested that exposure may cause estrogen-dependent diseases such as uterine cancer. Interestingly, women with a lower body mass index (BMI) have a higher risk of developing this disease as a result of cadmium exposure.

There are various mechanisms by which cadmium exposure from hair relaxers could result in uterine cancer, such as:

Uterine cancer is more common in Black women, and they are twice as likely to die from it than white women. If you have been using chemical hair relaxers and came to struggle with uterine cancer, we strongly advise you to get in touch with our resourceful legal team. We can efficiently help you determine whether you are eligible to file a toxic hair relaxer claim to obtain financial compensation for your suffering. The process is simple and fast, requiring only a few documents.

With over 30 years of experience, our attorneys will help you find out whether you qualify for compensation from the hair relaxer manufacturers whose products you have been using if you have uterine cancer. The only documents you will have to provide our legal team with are your medical records stating your diagnosis and evidence of your chemical hair relaxer use. Following a thorough review of your case, we will determine if you are eligible to file a toxic hair relaxer claim.

Since we are aware of how challenging suffering from cancer can be, we will do all in our power to ease the legal process for you by taking care of the most complex aspects. If you are too ill to seek compensation, a family member can assist you during each step of the process. Our attorneys, who specialize in toxic exposure and defective product cases, will strive to obtain the most favorable outcome for your case if you are entitled to compensation from the manufacturers.

Which chemicals in hair relaxers cause cancer? »

Which hair relaxers can cause cancer? »

How do the chemicals in hair relaxers cause cancer? »

Who is more likely to develop uterine cancer after using hair relaxers? »

Why are Black women more affected by hair relaxers than white women? »