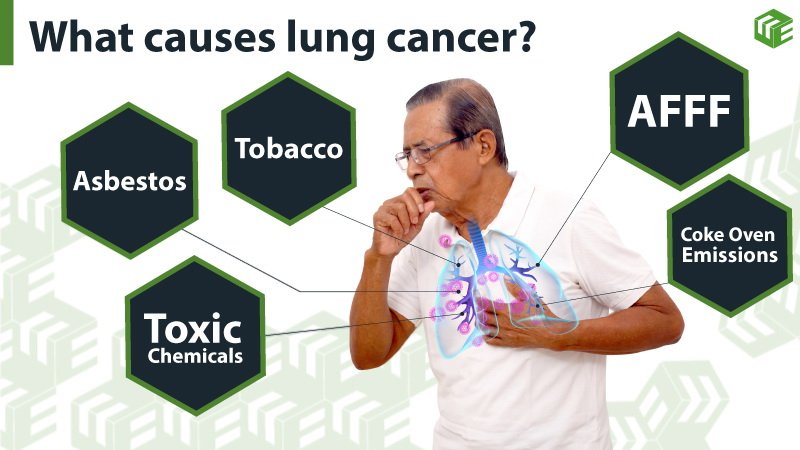 While most people associate lung cancer with tobacco smoking, toxic exposure in occupational settings or in the military can result in this disease as well. Some of the hazardous agents responsible for lung cancer are a group of over 5,000 dangerous chemicals known as PFAS (mainly PFOA and PFOS)  also present in the firefighting foam AFFF, and other substances that were present on most military bases across the country and asbestos. Both former industrial workers and veterans are at high risk of developing lung cancer. However, it is important to note that it usually takes several years to several decades until a person comes to struggle with this disease from their first contact with a toxic agent. Our law firm assists former industrial workers, and veterans diagnosed with lung cancer to recover the financial compensation they are entitled to. If you are in this unfortunate situation, do not hesitate to contact our attorneys. 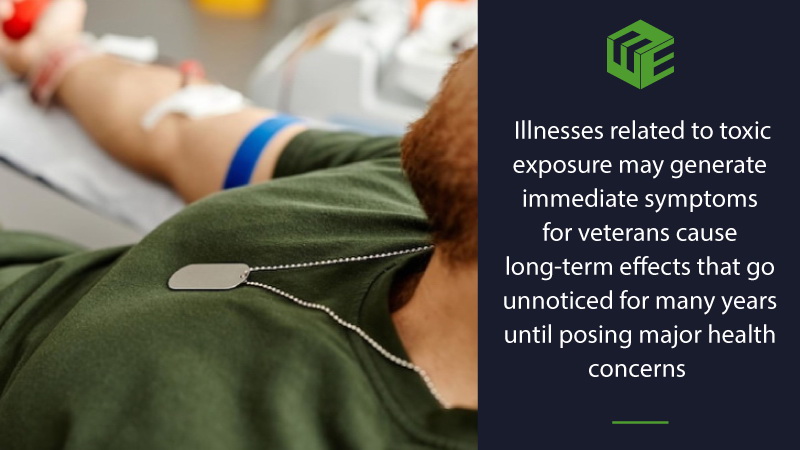 Currently, there are 679 military bases across the country where PFAS and other toxic chemicals lurk. Everyone who was stationed at one was unavoidably exposed to these hazardous agents, particularly if they spent a long time at the military base.

Often, service members lived with their families on military bases, who are now also at high risk of developing lung cancer.

In addition to PFAS, which also stem from the use of aqueous film-forming foam on military bases, the following substances are linked to lung cancer:

This is by no means a comprehensive list, as there are dozens of toxic chemicals polluting the environment of military bases, particularly industrial solvents. Exposure to such a hazardous concoction of substances increases the risk of lung cancer to a great extent. Moreover, veterans have also been exposed to burn pits, Agent Orange, and mustard gas during active service, all of which can result in lung cancer. Agent Orange was used as a defoliant during the Vietnam War, while mustard gas was used as a chemical weapon during World War II.

Veterans, family members, and civilians who lived at Camp Lejeune in North Carolina between August 1, 1953, and December 31, 1987, were exposed to contaminated drinking water. Multiple industrial solvents and PFAS lurked in drinking water. The dry-cleaning firm ABC One-Hour Cleaners was a major source of some of these solvents, but service members improperly disposing of toxic products used to clean equipment and weapons also contributed to water contamination. To become eligible to file a Camp Lejeune toxic water claim for lung cancer, you will have to meet the following criteria:

Under the new Camp Lejeune Justice Act, veterans can obtain compensation both from the government and the VA. Our law firm, which specializes in toxic exposure, may be able to help you receive money from both sources, so feel free to give us a call to initiate the process.

If you were stationed or worked at another military base than Camp Lejeune, you will have to meet a series of slightly different requirements to find out whether you are entitled to compensation. As a veteran, what immediately disqualifies you from compensation is having a dishonorable discharge from the military. Nevertheless, if this is not your case, you will have to meet the following:

Family members and civilians will also need to provide our attorneys with proof of their stay at the military base and their medical records, clearly stating and explaining their lung cancer diagnosis. Lastly, it is important to know that if you spent time at a contaminated military base while you were pregnant, either as a servicewoman or the spouse of a veteran, and your child was born with a congenital malformation, you may also be eligible for compensation on behalf of your baby. So, we also encourage you to contact our attorneys if this is your situation.

20% of the firefighters working with AFFF develop lung cancer 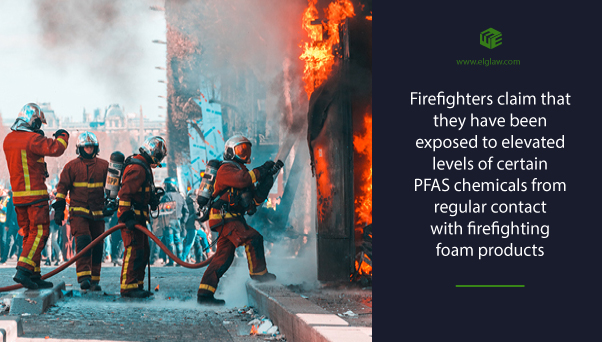 Both civilian and military firefighters have been using the fire suppressant AFFF to extinguish jet fuel and petroleum fires since 1966. Still, this firefighting foam contains between 50% and 98% PFAS, a group of toxic chemicals that persist in the environment and the human body. According to the Centers for Disease Control and Prevention, there is a causal relation between PFAS exposure and lung cancer. The lung tissue accumulates a high concentration of PFAS after exposure. Two of the most studied chemicals from this group, PFOS and PFOA, have four carcinogenic features that contribute to the development of lung cancer, they:

Furthermore, medical studies revealed that PFAS exposure might cause lung toxicity, which entails severe inflammation, preventing the lungs from absorbing oxygen. This results in shortness of breath. Alarmingly, even the personal protective equipment firefighters wear is made of PFAS, which only worsens their risk of exposure. Over time, the equipment degrades, making the chemicals more easily to be inhaled, and civilian and military firefighters have yet another source of toxic exposure. If you work or have worked with AFFF and now suffer from lung cancer, please get in touch with our experienced attorneys. They may be able to help you obtain the compensation you are entitled to from the AFFF manufacturers.

To benefit from compensation from the AFFF manufacturers whose products you used during your job, you must meet a series of eligibility requirements. Whether you are a civilian or military firefighter, you must:

Only after a thorough and careful review of your documents will our legal team be able to determine whether you qualify for filing a claim for AFFF exposure with the liable manufacturers, which include Du Pont, Tyco Fire Products, and 3M Company. 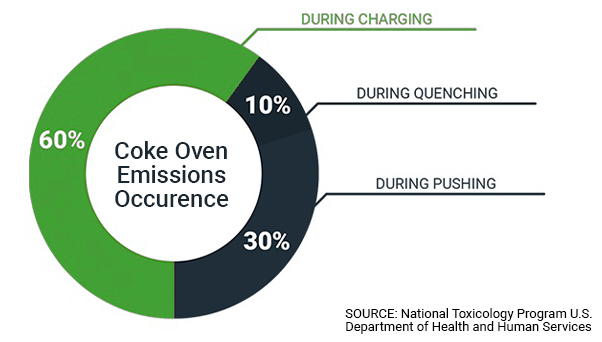 As complex mixtures of dust, vapors, and gases, including toxic metals such as cadmium and arsenic, coke oven emissions have a strong causal relation with lung cancer.

These emissions stem from the large ovens used to heat coal to manufacture coke, which is used to make iron and steel.

Consequently, people working in the iron and steel industries are at high risk of lung cancer even if they wear protective equipment such as respirators. They inevitably breathe in these hazardous emissions, and over time, exposure may result in lung cancer.

People who were occupationally exposed to coke oven emissions and developed lung cancer will need to have their eligibility checked by our experienced attorneys to file a claim. For this process, they will request your employment records and your medical records. Usually, to qualify for filing a claim for lung cancer caused by coke oven emissions, you have to meet the following requirements:

If you are unsure about whether you are entitled to compensation from your employer for lung cancer that is believed to have been caused by exposure to coke oven emissions, do not hesitate to contact our legal team. We will promptly examine your case and let you know if you are eligible to file a toxic exposure claim. 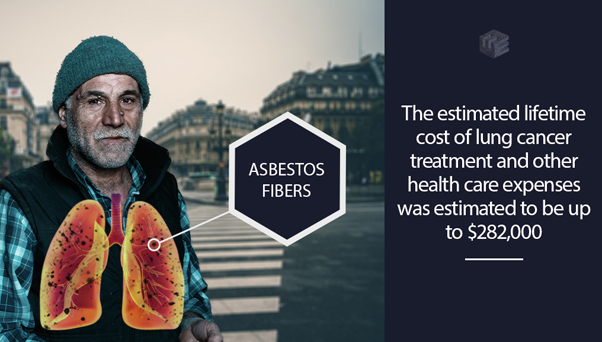 A causal relationship between asbestos exposure and lung cancer was suggested by medical researchers in 1935 when the use of this carcinogenic mineral in military and industrial occupational settings was becoming increasingly popular.

Seven years later, the National Cancer Institute recognized asbestos as a factual cause of lung cancer. Inhaling airborne asbestos fibers can lead to lung cancer within 15 to 35 years from the first exposure to the mineral.

Once asbestos fibers enter the respiratory tract, they become embedded in lung tissue very easily due to their rough texture. Since the human body cannot naturally eliminate asbestos entirely, the fibers will remain in the lungs, gradually causing inflammation and severe tissue scarring, which may eventually lead to the onset of lung cancer. It is essential to know that lung cancer stemming from asbestos exposure is different from mesothelioma, which also has asbestos exposure as a risk factor.

Researchers have been striving to determine the mechanisms by which asbestos exposure causes lung cancer. They found evidence that asbestos may trigger changes within DNA itself. A chemical reaction known as DNA methylation impacts certain biological processes. This reaction is fundamental in regulating gene expression and carcinogenesis. Asbestos exposure affects the following two biological processes:

Our resourceful attorneys will go to great lengths to obtain the financial compensation you deserve for your unjust suffering. The main source of compensation for people whose health was impacted by occupational or military asbestos exposure is asbestos trust funds. When the companies that had been manufacturing asbestos products, knowing about the dangers of exposure, filed for bankruptcy, they had to set up trust funds so that everyone could file a claim to recover financial compensation. There are approximately 60 asbestos trust funds in the United States. The following are the eligibility criteria a former industrial worker or veteran must meet to become eligible to file a claim for asbestos exposure:

It is worthy of note that smokers also qualify for compensation as long as asbestos fibers are found in their lung tissue, as this means asbestos is the culprit behind lung cancer, not smoking. Secondary asbestos exposure was very common during the last century among the family members of industrial workers, as they would often come home covered in toxic asbestos fibers. Inevitably, their spouses, children, and other family members would inhale those fibers when greeting and hugging the industrial worker, and the asbestos fibers would also become embedded in furniture such as carpets, armchairs, and couches. Asbestos trust funds also provide affected family members with financial compensation.

It is not uncommon for toxic exposure victims suffering from lung cancer to fail to pursue a lung cancer claim during their lifetime, as factors such as poor health will often deter them from seeking financial compensation. However, pursuing compensation for lung cancer is no longer a complex, time-consuming process.

If you have a family member with a lung cancer diagnosis who had not filed a claim before passing away, you may be able to recover compensation on their behalf. With nearly 30 years of experience in toxic exposure cases, our expert team will strive to help you file a claim with the liable parties, which requires no trial.

Regardless of what toxic agent caused your lung cancer, our attorneys will gladly help you determine whether you qualify for filing a claim to obtain the financial compensation you may be entitled to. After you provide our legal team with your employment or military records, which you must retrieve, and your medical records, we will carefully assess your case. If you are eligible to file a toxic exposure claim, our experienced attorneys will do all in their power to recover the maximum compensation you deserve for your physical and emotional suffering.

We can also help secondary asbestos exposure victims and surviving family members of former industrial workers and veterans. Finally, veterans will have a VA disability compensation claim filed with our help if they are eligible to obtain additional monthly compensation. If you are unsure whether you are eligible to file a claim, we highly advise you to give our law firm a call, as you may actually be entitled to financial compensation, which can help tremendously with the cost of your lung cancer treatment.