Since 1894, when it was first commercialized, talcum powder has been widely used in the US. However, talcum powder is often contaminated with asbestos and, even after the refining process, a significant amount of this dangerous mineral remains in the final product. Accordingly, medical studies found a causal relation between frequent use of talcum powder and lung cancer, as well as a connection between exposure to this product and ovarian cancer and other diseases in women. If you developed one of these serious diseases after you had been using talcum powder, we strongly encourage you to contact our law firm to recover the financial compensation you are entitled to from the liable companies.

The connection between talcum powder and lung cancer 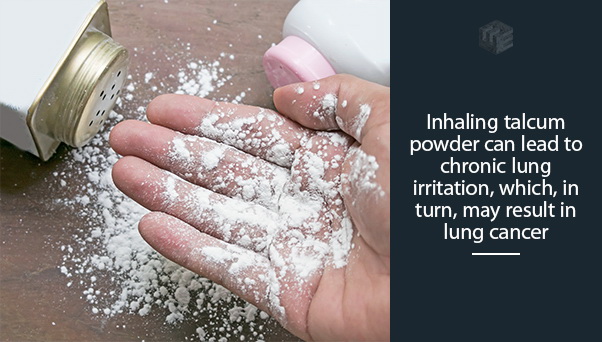 According to a U.S. Department of Health and Human Services report, people who use talcum powder on a regular basis are at high risk of developing lung cancer, since they inevitably breathe in some of the product when they apply it to their skin.

Inhaling talcum powder can lead to chronic lung irritation, which, in turn, may result in lung cancer. In 1993, the National Toxicology Program published the results of a study conducted on rats concerning the effects of talcum powder on the lungs. During the study, rats that were exposed to talcum powder developed both benign and malignant tumors in their lungs. Therefore, it is very possible for talcum powder to cause lung cancer.

Furthermore, the Centers for Disease Control and Prevention made public the results of a study on talc miners and millers from 1995. They observed 710 men who mined or milled the mineral from 1947 to 1978. The workers were more susceptible to developing both benign lung diseases and lung cancer in contrast to the general population. While the Centers for Disease Control and Prevention expected to find 8 deaths caused by lung cancer in talc miners and millers, there were actually 17. Although the American Cancer Society claims that there is no risk of coming to struggle with lung cancer as a consequence of using cosmetic talcum powder, the risk still exists, as people unavoidably inhale the product when they apply it.

If you developed lung cancer and had been using talcum powder on a regular basis, you are entitled to financial compensation from the responsible companies. Our attorneys, whose main area of practice is toxic exposure, will file a lawsuit on your behalf so that you can benefit from the money you deserve for your suffering. This way, not only will you have more financial resources to help you afford quality treatment, but the liable talcum powder companies will also be held accountable for their negligence. Similarly, if you are or were a talc miner or miller and came to struggle with lung cancer, you also qualify for compensation and, if more of your coworkers developed this awful disease, we will pursue money for all of you in the form of a class-action lawsuit that will be filed against your employer.

Approximately 40% of women in the United States regularly use talcum powder, which can be found in the form of baby powders, foot powders, medicated powders, cosmetics, and intimate hygiene products. In other words, 2 out of 5 women use talcum powder on a regular basis.

Numerous reputable medical studies found that talcum powder applied directly to the genital area or on sanitary napkins, diaphragms or condoms may lead to the development of ovarian cancer over the years. It has been estimated that the risk of developing this malignant disease increases by up to 33% for women who frequently use talcum powder as a personal hygiene product. The asbestos fibers that are present in talcum powder can reach the ovaries through the vagina, where severe inflammation subsequently occurs, which may, in turn, lead to ovarian cancer.

In the regrettable case that you came to struggle with ovarian cancer after you had been using talcum powder on your genital area, you are eligible for compensation, which our skillful attorneys and resourceful legal team will help you recover from the responsible companies. We will file a lawsuit on your behalf with the liable companies or, if there are more women in your situation, a community case will be brought against the companies that manufactured the hazardous products you had been exposed to. Since 1990, we have been providing quality legal assistance to victims of toxic exposure and will go to great lengths to recover fair compensation for you if you developed ovarian cancer as a result of using talcum powder.

What other diseases can the frequent use of talcum powder cause?

In addition to lung cancer and ovarian cancer, there are other malignant diseases of the female reproductive system that frequent exposure to talcum powder can result in, according to medical studies, as well as other respiratory diseases.

In 2019, the pharmaceutical giant Johnson & Johnson set aside $3.9 billion for litigation involving the talcum powder they manufacture under the brand names Johnson’s Baby Powder and Shower to Shower Powder, which dates back to 1893. At the moment, the company is facing over 25,000 lawsuits filed mostly by women who developed ovarian cancer after they had been regularly using their talcum powder.

Despite the lawsuits, the company insists that its products are safe to use and that any cases of talc contaminated with asbestos were isolated incidents or the result of faulty testing. Nevertheless, Johnson & Johnson is not the only talcum powder manufacturer against which lawsuits have been filed recently, as Colgate-Palmolive Co. and Imerys Talc America, a talc supplier, are also facing lawsuits for the same reason. The following is a timeline of lawsuits filed against manufacturers of talcum powder:

2016 - A jury in the City of St. Louis, Missouri found Johnson & Johnson responsible in multiple cases

At the moment, there are thousands of lawsuits pending against Johnson & Johnson, which were filed mostly by women with ovarian cancer. In February 2019, the talc supplier of the company, Imerys Talc America, filed for bankruptcy to protect itself from over 14,000 lawsuits claiming that their talc causes ovarian cancer and mesothelioma. Consequently, people who developed lung cancer, mesothelioma, ovarian cancer, uterine cancer, or cervical cancer can recover the financial compensation they deserve from the liable manufacturers.

Since 1990, we have been pursuing compensation on behalf of victims of toxic exposure and are willing to go to great lengths to recover the money you deserve for your diagnosis from the liable talcum powder manufacturers and suppliers. All we need from you is a thorough description of your talcum powder use and evidence of your related diagnosis, which must be lung cancer, mesothelioma, ovarian cancer, uterine cancer, or cervical cancer. The malignant tumors in your body must contain talc particles in order for you to qualify for filing a lawsuit against one or multiple companies. Moreover, our legal experts will conduct extensive research to find additional evidence to support your lawsuit. We will file your lawsuit with all the responsible manufacturers and suppliers. Eventually, you will receive your verdict, which is bound to be in your favor if you decide to work with our skilled legal team.