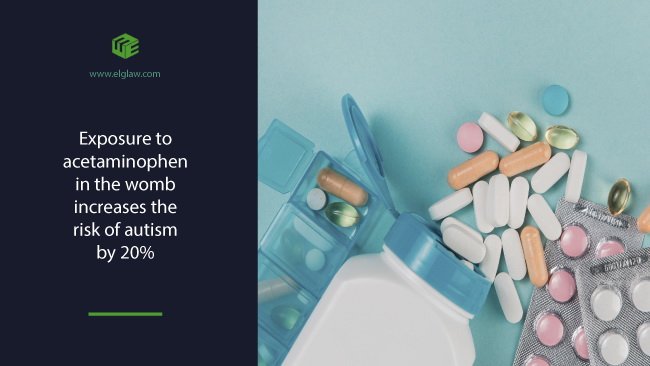 Autism refers to a broad range of neurodevelopmental disorders characterized by problems with social interaction and communication and restricted or repetitive behaviors or interests. In the United States, autism currently occurs in 1 in 44 children and can be diagnosed as early as 18 months of age. While the causes of the disorder are not entirely clear, some of the known risk factors include low birth weight, genetic mutations, and having a sibling with autism. However, it has been recently discovered that exposure to acetaminophen in the womb increases the risk of autism by 20%. This over-the-counter medication effectively alleviates mild to moderate pain and reduces fever. Acetaminophen is sold across the country mostly under the name Tylenol. If you took acetaminophen during pregnancy and your child developed autism (Asperger's syndrome, Kanner's syndrome, pervasive developmental disorder, and childhood disintegrative disorder, a.k.a. Heller's syndrome), contact our law firm, as you may be eligible for compensation.

Please consider that we do not take standalone Tylenol cases. You must have fed your child toxic baby food in addition to taking acetaminophen during pregnancy. If you match both criteria and your child developed autism we are able to help.

In a recent study, out of the 996 children exposed to Tylenol in the womb, approximately 65 developed autism

A study published in the medical journal JAMA Psychiatry conducted by the Johns Hopkins University Bloomberg School of Public Health analyzed data from the Boston Birth Cohort, a complex, long-term study of factors influencing pregnancy and child development. The researchers examined the umbilical cord blood of 996 women and measured the acetaminophen concentration in each sample. By the time the children were approximately 8 years old:

In another research from the American Journal of Epidemiology, seven studies involving 132,738 pairs of mothers and children were analyzed. Depending on the study, the participants were followed for 3 to 11 years and partook in questionnaires, interviews, and self-reports on medication use. Researchers found a 20% higher risk of autism in children of women who took acetaminophen frequently during their pregnancies.

Nonetheless, Ob/Gyn Salena Zanotti, MD, advises pregnant women to limit their use of Tylenol and not to avoid taking it altogether, as "when you're pregnant, it's riskier to have an untreated fever than it is to take acetaminophen." Taking acetaminophen occasionally during pregnancy was not found to cause any negative outcomes in children regarding neurodevelopment. Lastly, a review facilitated by the California Institute of Behavioral Neurosciences & Psychology from 2022 found collective evidence from thousands of participants in 13 studies that acetaminophen use during pregnancy is linked to multiple neurodevelopment disorders, including autism.

Since numerous studies found a causal relation between acetaminophen use during pregnancy and autism spectrum disorder, many lawsuits have already been filed with the drug manufacturers, particularly with Johnson & Johnson, which produces Tylenol. At the moment, the plaintiffs are waiting for the consolidation of these claims into a class action multidistrict litigation.

If you took acetaminophen for a prolonged time while pregnant and your child developed autism, we strongly encourage you to contact our attorneys, who will help you file a claim. However, to become eligible to file a claim, you must:

We have over two decades of experience in pursuing defective drug cases, so you can rest assured that if you are eligible, we will do all in our power to recover the maximum financial compensation available for you and your child's distress. If you believe you meet the eligibility criteria, do not hesitate to get in touch with our law firm.

Our law firm takes defective drug cases and has been helping individuals who came to struggle with health problems as a consequence of using or being exposed to such medication for over 25 years. Women who took Tylenol or another medication whose active ingredient is acetaminophen frequently during their pregnancies and gave birth to children with autism spectrum disorder may be entitled to compensation from the liable manufacturers.

If you are in this unfortunate situation, we highly advise you to contact our skilled attorneys, and they will promptly review your case. They will begin working on your claim as soon as possible if they deem you eligible to file a claim, and, eventually, you will obtain the largest sum of money you deserve for the unjust suffering of your child. It is important to know that we work on a contingency fee basis, which means you will not have to pay our legal team anything unless we recover compensation on your behalf.