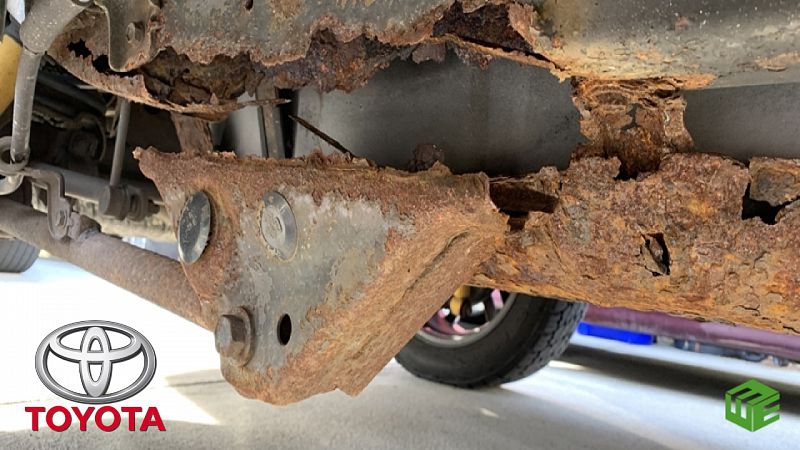 In December 2018, a lawsuit was filed against Toyota Motor Corporation in South Carolina on the basis of consumers experiencing premature rusting of the frame of the vehicles. The defective automobiles are Toyota 4Runners manufactured between 2003 and 2009, which fall under the 4th generation of the company's vehicles. As a consequence of the severe rusting of the undercarriages of Toyota 4Runners, people can experience serious accidents while driving, such as the front steering control arm of the automobile breaking off, which causes the driver to run off the road. Our law firm is currently taking on cases of people who own a defective Toyota 4Runner with the purpose of helping them recover the financial compensation they are entitled to from the company to fix the issue of rusting on their automobiles. While we are currently handling cases from consumers in the whole country.

Why are Toyota 4Runners manufactured between 2003 and 2009 defective? 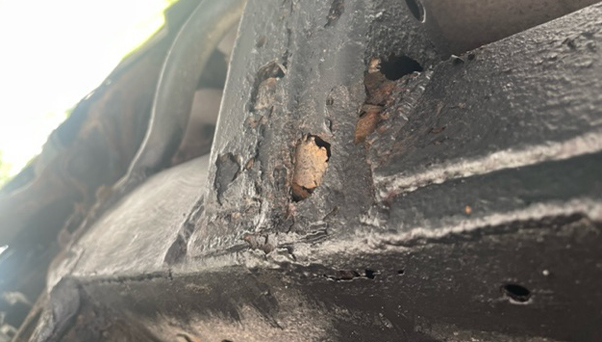 The frame of the Toyota 4Runner, which is manufactured by Dana Holding Corporation, is the primary support structure of the vehicle, to which every piece is attached. It is the main protection against injury in a car accident. Consequently, if it becomes affected by rust, it is significantly more prone to failing to protect drivers in a car accident and, furthermore, it can also cause serious accidents in and of itself.

The excessive rust corrosion of the frame of a Toyota 4Runner greatly hinders the safety, crash-worthiness, and stability of the automobile, as transmission mounts, essential suspension components, and engine mounts are attached to it. This defect in Toyota 4Runners can lead to the following problems:

If you continue driving a 4Runner with severe rust corrosion, you may experience the following car accidents as a result of a piece of your car breaking off and causing you to lose control of your vehicle: 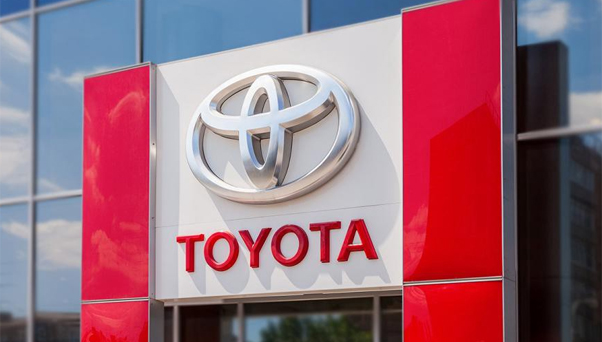 According to documentation, Toyota Motor Corporation had been aware of the issue of premature rusting of the undercarriage of their 4Runners for a long time but continued to manufacture and sell defective vehicles.

The company also chose not to warn consumers of this problem, which is why it can be held liable in the class-action lawsuit whose lead plaintiff is Gary Weinreich. He purchased a Toyota 4Runner in 2005, and his vehicle was undergoing regular service at a Toyota dealership.

However, in 2011, only 6 years later, Weinreich was told by a mechanic that there was a "severe and excessive" amount of rust on the undercarriage of his automobile and the drive shaft transmission. During another appointment, the plaintiff was informed that the undercarriage, splash shields, exhaust, and shocks of his car were very rusted. In 2017, he took his vehicle to a repair shop for brake replacement and oil change. Once again, he was told that his Toyota 4Runner had "excessive frame corrosion."

Allegedly, Weinreich tried to contact the company to complain about the issue of frame rusting, but he received no response in this regard. The plaintiff argues that the rust issue affects the structural integrity of the Toyota vehicles and makes the automobiles "unsafe to drive and a hazard on the roadways." It was in 2018 that the front steering control arm of the 4Runner of Weinreich broke off, which caused him to run off the road. This accident prompted him to file a class-action lawsuit against Toyota Motor Corporation.

Unlike in the case of other models of their vehicles, Toyota Motor Corporation refused to address the problem of 4Runners. Interestingly, the company faced a previous lawsuit in 2016 concerning the same rusting problem in their Tacomas, Sequoias, and Tundras, and it was settled for $3.4 billion in 2020. Nonetheless, the company did not admit it manufactured defective vehicles. At the moment, Weinreich represents himself and the many other drivers who own a defective Toyota 4Runner in the ongoing lawsuit. The 4Runners were not included in the Customer Support Program of Toyota Motor Corporation like the models involved in the first lawsuit, which the plaintiff believes is endangering consumers and fails to thoroughly address the rust corrosion problem.

What injuries can you sustain in a car accident if you drive a Toyota 4Runner with severe rusting of the frame? 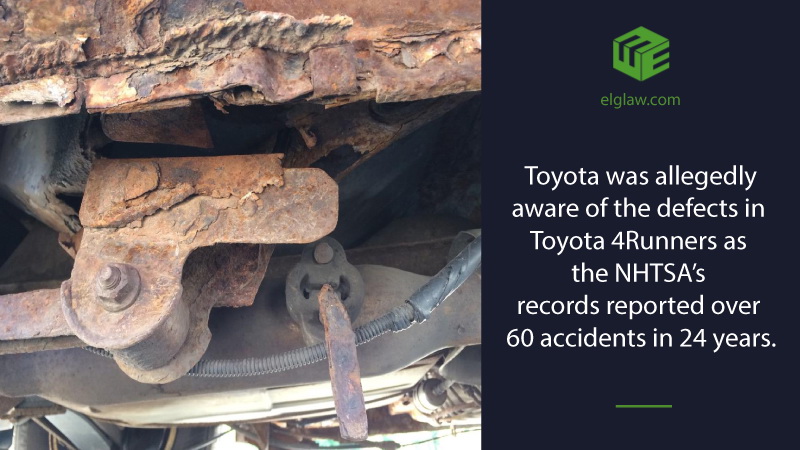 Depending on the gravity of the impact, you as a driver and your passengers can experience a wide range of injuries and even death.

Because the excessive rusting of the undercarriage of the Toyota 4Runners can cause plenty of vehicle components to fail, there can be multiple causes for your accident. Nevertheless, the following are the most common injuries people sustain after a car accident:

No matter what type of car you are driving, it is essential to always wear your seatbelt, as it can prove to be life-saving in a car accident. In the regrettable case that you sustained one or multiple injuries as a result of driving or riding in a Toyota 4Runner with excessive rusting of the frame, our attorneys will gladly help you recover financial compensation for your distress. All you have to do is reach out to our law firm as soon as possible so that we will have the necessary time to carefully assess your situation and decide on the best course of action.

What will the financial compensation I will receive after filing a claim cover? 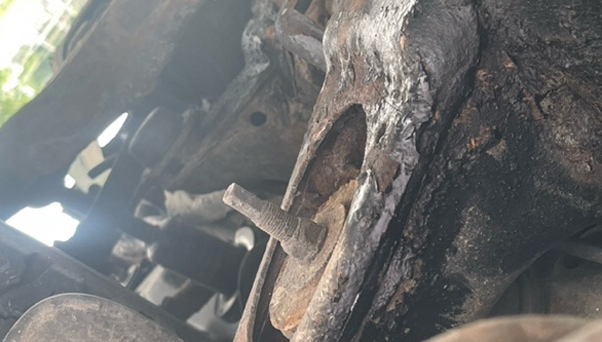 Whether you went through a car accident because your Toyota 4Runner was defective or not, if you have such a vehicle, we strongly encourage you to contact our law firm, and our attorneys will provide you with the assistance you need to file a claim with the liable company.

The money you will receive following claim submission if your car has excessive rusting will help you take your automobile back to the manufacturer and have the issue fixed, for which you will have to pay approximately $15,000.

We are aware that, for many people, this is going to take quite a heavy toll on their budget, which is why it is very important to file a claim in order to recover the money necessary to repair your car.

Which are the Toyota 4Runner models that are susceptible to excessive rusting of the frame? 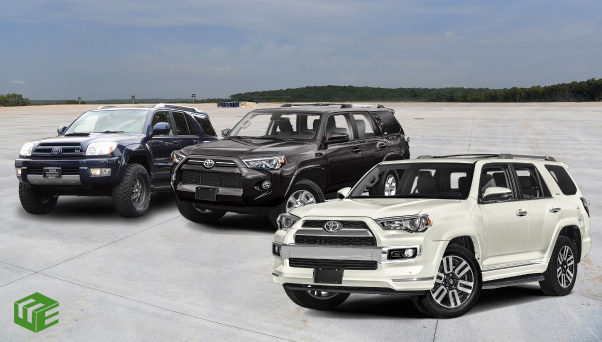 If you own a Toyota 4Runner that was manufactured between 2003 and 2009, your vehicle is most likely having a defective undercarriage that is prone to excessive and premature rusting. The following are the car models that fall in this category:

During that period of time, Toyota Motor Corporation manufactured only these models of 4Runners every year, although their design and features were relatively different.

What is the stance of Toyota Motor Corporation on the allegations of the plaintiffs involved in the lawsuit? 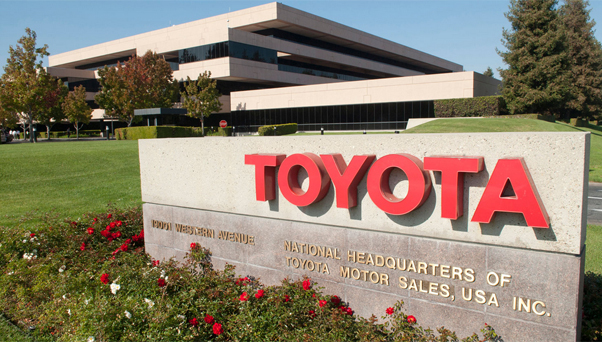 The complaints of Gary Weinreich, the lead plaintiff in the new Toyota lawsuit, have been brought up to the attention of the National Highway Traffic Safety Administration, which prompted the agency to open a complete investigation.

They looked into the issues of the Toyota 4Runners manufactured between 2002 and 2006 on August 17, 2018, following the complaints of consumers that the severe rusting was "resulting in difficulty controlling the vehicle."

Despite obvious evidence from multiple parties that their 4Runner models are defective, the company still claims innocence, as it also did in the first lawsuit, regardless of the hundreds of thousands of the issued recalls. Additionally, as a response to the lawsuit filed by Weinreich and the other people affected by this problem, Toyota Motor Corporation asked for a motion of dismissal in May of 2019, arguing that "the plaintiff fails to establish any legitimate claims against the automaker."

A timeline of events and lawsuits concerning the defective Toyota 4Runners

The Japanese automobile manufacturer Toyota is a world leader with vehicles that are truly a class apart. Nevertheless, the only problem this brand seems to be struggling with is rust. Toyota was forced to recall thousands of Tundra models of 2000-2003 sold in America because of frame rust. Excessive rust on the cross frame member at the rear can cause the separation of the spare tire, which is usually deployed under the truck bed. Therefore, it can be a serious road hazard resulting in accidents and injuries.

To minimize the risk and solve the issue, Toyota came up with some measures, including:

These services are provided free of cost, but Tundra owners have to visit the dealer multiple times.

The warranty claims could proceed based on Gary Weinreich's allegation that Toyota "knew, at the time of sale, that the defect existed and would not manifest until after the warranty expired, and that Toyota was on notice based on issues with the frames of prior car models," Judge Richard Mark Gergel said.

Still, the court rejected a claim for negligent misrepresentation. It declined his request to add negligence and strict liability claims based on South Carolina's economic loss rule, which bars tort claims for a product's damage to itself.

Because his defect petition had not led to the investigation of Toyota 4Runners for alleged premature frame rust, Gary Weinreich filed a lawsuit against the automobile manufacturer on behalf of a proposed class of 4Runner owners. However, according to a federal court in the state, his express warranty expired long before his car became undrivable.

Weinreich claimed mechanics detected "severe" undercarriage rust on his SUV in 2011 and 2013, but these did not indicate "structural or safety" concerns. In 2017, a mechanic told the man his car had frame corrosion and that Toyota had a customer support program for rust issues in other models.

In May 2018, while Weinreich was driving, the front right control arm broke off the corroded frame, which caused him to lose control of the SUV. A mechanic "declared the vehicle unrepairable and inoperable." Toyota tried to have the case dismissed under the state's 6-year statute of limitations for warranty claims. Shortly after, the company filed for dismissal, citing a "lack of any legitimate claims against the automaker."

Gary Weinreich of South Carolina, the owner of a 2005 Toyota 4Runner, petitioned the National Highway Traffic Safety Administration to investigate the premature frame corrosion on over 520,000 models year 2002 to 2006 Toyota 4Runners. However, the agency refused to conduct the investigation. According to the petition, Weinreich referenced frame rust complaints filed by other Toyota 4Runner owners.

Toyota settled a lawsuit for $3.4 billion in 2016 for frame rust issues with Tacomas from 2005 to 2010, Sequoias from 2005 to 2008, and Tundras from 2007 to 2008. Dana Holding supplied the frames for those vehicles. A federal class-action lawsuit was filed by owners of pickup trucks and SUVs whose frames could prematurely rust.

"We want our customers to have a great ownership experience, so we are pleased to resolve this litigation in a way that benefits them and demonstrates that we stand behind the quality and reliability of our vehicles," Toyota said.

If you own a Toyota 4Runner that was manufactured between 2003 and 2009 and the undercarriage of the vehicle was affected by premature rusting, you have the right to recover financial compensation, as the product is defective. Similarly, if you went through a car accident as a consequence of this issue with your automobile, we also encourage you to take legal action. Our attorneys are taking on claims filed by owners of faulty Toyota 4Runners. The only documents that are necessary are evidence of you owning the vehicle in question and of the damage that it has suffered. In the regrettable case that you experienced a car accident due to the defective nature of the automobile, we will also need proof of that.

Will Toyota fix the rust issue on the frame of my 4Runner? »

Have Toyota 4Runners with frame rusting issues been recalled? »

Which Toyota 4Runners have rust issues? »

How much do I need to pay to have my Toyota 4Runner repaired if it has rusting issues? »

Why do Toyota 4Runners have frame rusting issues? »

Is there a lawsuit involving defective Toyota 4Runners? »

What issues do Toyota 4Runners have? »

Will I recover compensation if the frame rusting problem of my Toyota 4Runner caused a car accident? »