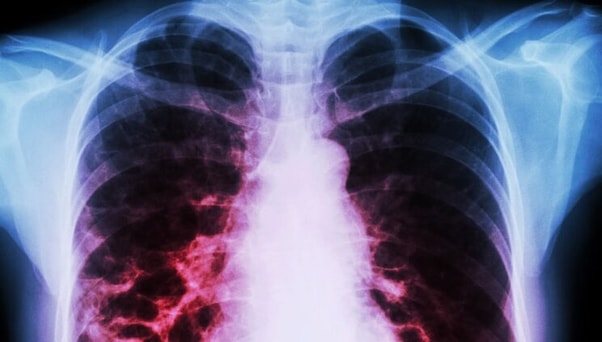 Atelectasis, a pulmonary condition, occurs when a portion of a lung or the entire lung collapses. In people with a history of asbestos exposure, atelectasis may be a sign of lung cancer, as a malignant tumor inside the lung can lead to the collapse of the organ.

As a pulmonary condition, atelectasis occurs when a lung collapses or closes, which results in low or no gas exchange. The condition is often unilateral, meaning that it damages only one of the lungs. It is very common among people with a history of asbestos exposure, affecting up to 70% of former industrial workers and veterans, both demographics which handled large amounts of asbestos directly on their job or during military service. Since atelectasis may be a sign of lung cancer, people who struggle with this condition need to undergo further medical examination.

Atelectasis is a pulmonary condition which entails the partial or complete collapse of a portion of the lung or of the entire lung. It occurs when the air sacs of the lungs, the alveoli, become deflated or fill up with fluid. While atelectasis is one of the most common health complications following surgery, it can also indicate the presence of a more severe pulmonary disease, such as lung cancer. There are two different types of atelectasis: obstructive and non-obstructive. The former is usually caused by a buildup of mucus in the lungs, the presence of a foreign body in the lungs or a tumor inside the lungs, whereas the latter is the consequence of chest trauma, pleural effusion, scarring of the lung tissue, pneumonia or a tumor inside the lungs. Therefore, regardless of the type, atelectasis may be a sign of lung cancer in people with a history of asbestos exposure.

However, there are other classifications of atelectasis, depending on the damage it produces to the lungs, the severity of the condition and the portion of the lung which is affected. Consequently, atelectasis may be: 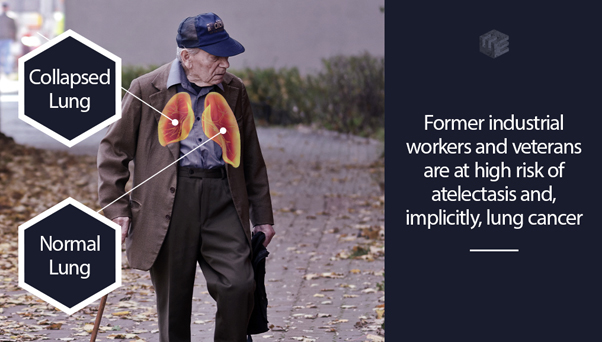 Regardless of the type, atelectasis may be a sign of lung cancer in people with a history of asbestos exposure, since the pressure of a malignant tumor inside the lung may lead to the collapse of the affected lung.

While the primary cause of lung cancer is tobacco smoking, which accounts for up to 80% of cases, the disease can also occur as a consequence of asbestos exposure in occupational or military settings. Thereby, former industrial workers and veterans are at high risk of atelectasis and, implicitly, lung cancer. Approximately 20% of former industrial workers and over 30% of veterans come to struggle with a disease stemming from asbestos exposure. Lung cancer is very prevalent among these demographics, as asbestos is a known human carcinogen which, once inside the lungs, slowly causes inflammation and tissue scarring, which may, in turn, give way to the development of one or multiple malignant tumors.

For this reason, undergoing regular medical examination is crucial if you are a former industrial worker or a veteran, as the risk of developing lung cancer is very high. Everyone who was exposed to asbestos is prone to receiving a dire diagnosis. However, people who served in the U.S. Navy before 1980 and the following occupational groups are extremely susceptible to lung cancer, as they were exposed to tremendous amounts of asbestos:

It is worthy of note that people with a history of asbestos exposure who smoke are 50 to 84 times more likely to develop lung cancer than non-smokers. Consequently, it is a very good idea to quit if you have this unhealthy habit to reduce your risk of receiving a lung cancer diagnosis.

How is atelectasis diagnosed?

The process of diagnosing atelectasis is relatively simple, as the condition is visible on a simple chest X-ray. However, to assess the extent and severity of atelectasis, additional tests may be necessary, such as:

Although atelectasis can take numerous forms and damage the lungs to various extents, some of the most common interpretations made by B-readers, medical professionals who specialize in explaining the result of X-rays, in people with a history of asbestos exposure are:

If you have recently received one of the above diagnoses and have a history of asbestos exposure, we strongly advise you to undergo further medical investigations, as your risk of lung cancer is very high. Thereby, if one of the above interpretations is on your medical paper, you need a more in-depth examination performed by a medical expert. Our medical specialists have vast experience in diagnosing diseases which occur as a consequence of occupational or military asbestos exposure and they will examine your lungs free of charge. It is always a good idea to seek a second opinion when it comes to serious diseases such as lung cancer, so we encourage you to contact our law firm for a free asbestos screening.

Pneumothorax is an abnormal accumulation of air in the space between the lung and chest wall, which causes the lung or part of the lung to collapse. A lung can collapse without an apparent injury to the lung or chest. This is called secondary spontaneous pneumothorax and is more likely to happen as a result of damage from underlying lung diseases.

A pneumothorax can be small and get better with time, or it can be large and require emergency treatment in Emergency Medicine Departments. As air builds up, the pressure inside the pleural space increases and causes the lung to collapse. The pressure also prevents the lung from expanding when you try to inhale, causing a sudden onset of sharp, one-sided chest pain, shortness of breath, and sometimes acute respiratory failure.

Lung diseases that may increase the risk of developing secondary spontaneous pneumothorax include:

Because lung function in these patients is already compromised due to inflammation and scarring of the lungs caused by breathing in asbestos fibers, secondary spontaneous pneumothorax often presents as a potentially life-threatening condition, requiring immediate action.

In the unfortunate case your atelectasis turns out to be a symptom of lung cancer which is the result of asbestos exposure, our attorneys, who specialize in pursuing toxic exposure cases, will file a claim with asbestos trust funds and with the VA, if you are a veteran, on your behalf so that you can recover the financial compensation you are entitled to. Having lung cancer qualifies you for seeking compensation from the asbestos trust funds of the companies which manufactured the harmful products you were exposed to, as there is a strong causal relation between asbestos exposure and lung cancer.

With 30 years of experience in helping people injured by asbestos exposure, our attorneys will obtain compensation for you within the shortest time possible, money which will also help you afford quality healthcare and treatment. Filing a personal injury claim as a victim of asbestos exposure will not only help you recover the compensation you deserve for your physical and emotional distress, but it will also hold the liable parties responsible for their negligent actions.