How can benzene exposure affect pregnancy and the newborn? 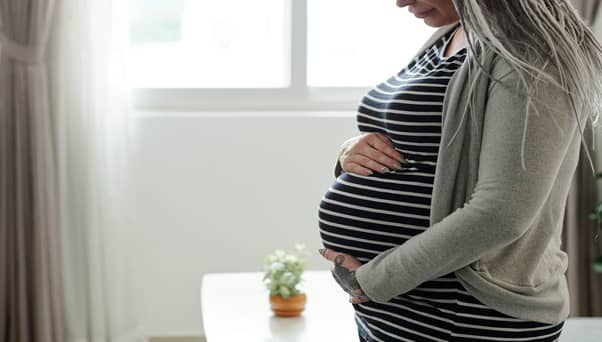 Benzene is a very toxic chemical that can wreak havoc on our health, sometimes even if we are exposed to low concentrations. Since benzene exposure can lead to the development of acute myeloid leukemia in adults, you might wonder how it can affect pregnant women and fetuses.

Muconic acid, a degradation product of benzene, can be found in the urine of pregnant women exposed to the chemical. A study led by the University of Montreal found that 29 pregnant women living close to natural-gas hydraulic fracturing sites had a concentration of muconic acid in their urine 3.5 times greater than that of the general population. Unsettlingly, in five participants, the level of muconic acid exceeded the biological exposure index, a measure created by the American Conference of Governmental Industrial Hygienists to protect workers, which speaks volumes about how fast our bodies absorb the chemical.

Benzene can pass from mother to fetus through the placenta

Like other toxic chemicals, benzene can pass from the mother to the fetus in the womb by crossing the placenta, after which it might cause damage to the DNA. The negative health consequences of benzene exposure are well-documented by now, both in adults and newborns. Newborns whose mothers were exposed to benzene during pregnancy are at high risk of developing acute myeloid leukemia. Furthermore, exposure to benzene during pregnancy, especially to high concentrations or to low concentrations on a regular basis, is associated with the following in the newborn:

A high level of exposure to benzene was also linked to the following birth defects: non-isolated truncus arteriosus, coarctation of the aorta, interrupted aortic, total anomalous pulmonary venous return, and isolated and non-isolated any critical congenital heart defect. Infants that have been exposed to benzene in the womb tend to experience significantly altered blood profiles, liver enzymes, and somatic symptoms, which places them at high risk of developing hepatic or blood-related disorders.

The blood abnormalities benzene can trigger in newborns

There are numerous routes of exposure to benzene for mothers-to-be, such as inhaling cigarette smoke, filling the car's gas tank, driving, and drinking water contaminated with benzene. More recently, the danger of benzene exposure from applying sunscreen has emerged in the U.S. While it can be tempting to downplay the severity of this kind of benzene exposure, the reality is that applying sunscreen with benzene every day, multiple times a day, during the whole nine months of pregnancy can pose a significant health threat both to the mother but particularly to the fetus.

In addition to causing hepatic abnormalities, which concern the liver and the enzymes, benzene exposure can also trigger hematological abnormalities in newborns, which are characterized by changes in the following blood components:

Additionally, benzene exposure might cause bone marrow depression with a drop in hemoglobin, hematocrit, and eosinophil counts. Once in the body, the chemical causes blood cells to work erratically. For instance, it can cause bone marrow to produce a too small amount of red blood cells, which can subsequently lead to anemia. Even more, benzene can damage the immune system by changing the blood concentrations of antibodies and causing the loss of white blood cells.

A study from the medical journal Pediatric Hematology and Oncology examined 312 children, out of whom 157 with a history of benzene exposure. The hematologic analysis revealed that white blood cell counts were considerably decreased in the children exposed to benzene compared with the unexposed children. On the other hand, platelet counts were increased significantly in the group exposed to benzene compared with the unexposed group.

Similarly, children with benzene exposure had substantially higher levels of alkaline phosphatase, aspartate aminotransferase, and alanine aminotransferase, all of which are liver enzymes, compared with the unexposed children. Ultimately, the study results show that children exposed to benzene experienced significantly altered blood profiles and liver enzymes, which indicates that they are at a higher risk of developing hepatic or blood disorders.

How benzene can impact the health of pregnant women

One of the most relevant findings with regard to pregnancy and benzene exposure comes from a study from the medical journal Occupational and Environmental Medicine. Accordingly, upon examining specific chemicals, a great risk of spontaneous abortion was found with exposure to benzene, as well as gasoline and hydrogen sulfide. The study was conducted on 3,105 women who were married, between the ages of 20 and 44, and who had never smoked, as the researcher's goal was to determine whether occupational exposure to benzene during early pregnancy had any adverse effect on their health.

Approximately 57% of these women employees reported occupational exposure to benzene during the first trimester of their pregnancy. There was a considerably increased risk of spontaneous abortion for women working in all of the production plants with frequent exposure to petrochemicals compared with those working in nonchemical plants.

Our resourceful lawyers will help you file your benzene sunscreen claim

Since 1990, our attorneys and legal team have been dedicating their efforts to assisting victims of toxic exposure in pursuing the financial compensation they were entitled to from the liable parties. If you have been wearing sunscreen contaminated with benzene and developed acute myeloid leukemia, we advise you to contact our legal staff, as we have the experience and resources to help you. After you give us a call, you just have to explain your situation, answer our questions, and send our legal experts a copy of your medical records.

Our attorneys will let you know whether you qualify for filing a benzene sunscreen claim after a careful assessment. If you do, they will shortly start preparing it for submission. Until resolution, you can carry on as usual with your life, as we will handle the most challenging aspects of the legal process on your behalf. We know that people who are in poor health often need more time to rest and undergo treatment. Eventually, we will present you with the compensation you are eligible for from the liable company.