How benzene exposure can affect the skin 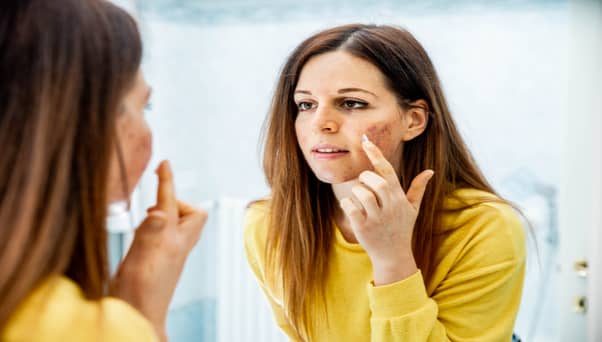 Benzene is a very irritating chemical. When it comes in direct contact with the skin, whether in liquid or vapor form, it can easily cause dermatitis. Furthermore, exposure to high concentrations of benzene can result in second-degree burns. However, the most concerning fact is that benzene can be absorbed through the skin.

Since it is a lipid solvent, benzene degreases the skin, especially after long-term or frequent contact with the liquid. It can also cause erythema, a burning sensation, and in more serious cases, edema and even blistering. Benzene exposure may also cause a skin allergy, and if it develops, exposure to very low concentrations might lead to itching and a skin rash.

However, skin absorption is one of the main routes of exposure to benzene, and when it occurs, it can significantly contribute to systemic toxicity. Systemic toxicity occurs when a toxic agent takes a toll on the entire body or multiple organs rather than a specific area. Because of their larger surface area to body weight ratio, children are more vulnerable to skin benzene exposure.

The negative impact of benzene exposure on the skin

Last year, the independent pharmacy Valisure found benzene lurking in three consumer products, which sparked outrage in everyone who had been using them. More specifically, the chemical was detected in 78 sunscreens, 44 hand sanitizers, and 59 antiperspirant and body sprays. Benzene has no place in consumer products, let alone in those that are applied directly to the skin, which makes this discovery even more alarming and outrageous.

While some products have been recalled in the meantime, others remain on the shelves of American stores, continuing to endanger consumers' health. The following are the effects of benzene exposure on the skin explained:

If you still have a sunscreen that can be found on the list of contaminated products, we strongly recommend you throw it away and replace it with a safe, non-toxic alternative. There is no way of knowing the benzene concentration in your old sunscreen, so it is best to get rid of it as soon as you see it on the list, which you can easily find online.

Finally, if you have no idea which sunscreen to use anymore, given the unsettling news, you can always request high-quality products from the ethical companies we collaborate with by virtue of the Benzene Sunscreen Replacement Initiative, whether you developed a disease or not. Nevertheless, you should know that we prioritize people who are ill, but you may be in luck and be able to eventually receive a great sunscreen to protect your skin from the damaging ultraviolet radiation.

Skin absorption, one of the most dangerous routes of exposure to benzene

Even at the contamination level implied by the use of most contaminated sunscreen, which is less than 0.1%, the amount of benzene absorbed through the skin over a long time can be significant, depending on the exposure time and the exposed skin surface. In a study from the International Journal of Occupational and Environmental Health, researchers used a random experimentally determined permeability value for benzene through the skin to calculate the amount of benzene absorbed through a known surface area during exposure where solvents with benzene were employed for cleaning.

Shockingly, these people's risk for leukemia increased by 42%. As a consequence, the medical experts concluded that liquid benzene must have proper labeling and that protective measures must be taken to minimize skin exposure by reducing the benzene concentration in products from 0.1% to 0.01%. In addition to the visible symptoms of skin benzene exposure, a person who came in contact with the chemical might also exhibit the following signs, in which case they need to receive medical attention as soon as possible:

In extremely serious cases, the person may collapse, lose consciousness, or go into convulsions. This is why immediate medical assistance is necessary. Benzene remains in the system for roughly 48 hours, so the individual might need to be hospitalized for two days or more so that they can be under medical supervision at all times to prevent complications. Nonetheless, this is less likely to happen with the application of benzene sunscreen, as by using a contaminated product, small amounts of benzene will slowly accumulate in your bloodstream and body, being able to eventually trigger the onset of acute myeloid leukemia.

Since 1990, our law firm has been focusing on offering superior assistance to toxic exposure victims, from industrial workers to veterans. Today, we have a much wider area of practice, and we take on claims from people who have been using benzene sunscreen and developed acute myeloid leukemia. If you are in this terrible situation, do not hesitate to call our legal staff. Subsequently, you will only have to explain your situation, answer our questions, and send our experts a copy of your medical records. Your medical records will also serve as a starting point in investigating your case to our attorneys, who need all the information they can get to determine the best course of action.

Following a careful evaluation by our experienced attorneys, you will know with certainty whether you can file a benzene sunscreen claim. If you qualify and wish to proceed with the legal process, we will promptly begin working on your claim to prepare it for submission. Until resolution, you can go on as usual with your life, as we will take care of the most challenging aspects of the legal process on your behalf. We know that oftentimes, very ill people need extra time to undergo treatment and rest. In the end, you will obtain the compensation you are entitled to from the liable sunscreen manufacturers.