The evolution of asbestos-related conditions 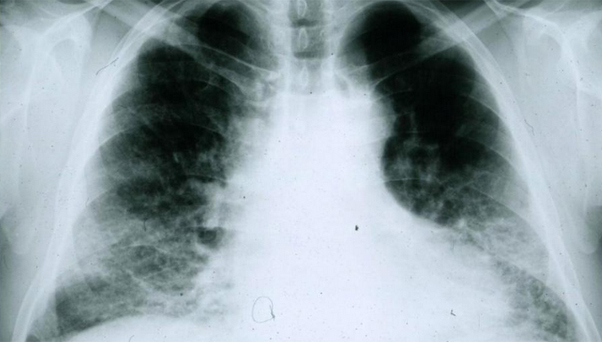 Asbestos is known to increase the risk of lung diseases, upon biopsies is known to travel through the body attacking other organs as well. Three types of common lung diseases are scarring(asbestosis), pleural diseases(non-cancerous forms), and lung cancer that affects the largest number of people in the US.

All three diseases are ultimately caused by the scarring of either the lung or the mesothelium tissue following prolonged exposure to asbestos dust. This consists of microscopic needle-shaped fibers that when inhaled accumulate in the lungs over time. The human organism is only capable of expelling a very small portion of these fibers, with the rest potentially remaining lodged throughout the person's life.

How asbestosis forms in the body? 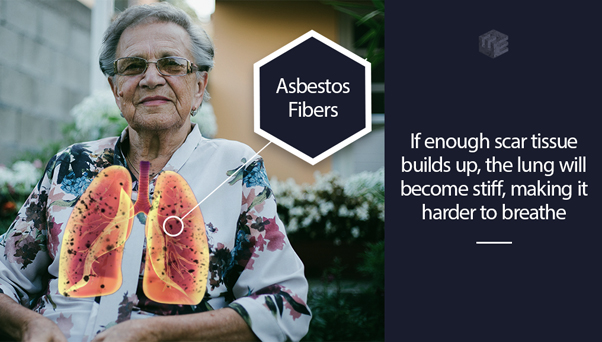 Decades after the asbestos fibers are inhaled or ingested, the immune system will fight against asbestos particles by replacing healthy lung tissue around the affected area with collagen fibers - a process commonly known as scarring. If enough scar tissue builds up, the lung will become stiff, making it harder to breathe.

At this stage, the person could be said to suffer from asbestosis, the first medical condition ever associated with asbestos. Symptoms of asbestosis usually manifest years after asbestos exposure occurred, as the scar tissue needs time to form, but this period can vary significantly depending on many circumstances, such as how long the person worked with asbestos, how many asbestos fibers were inhaled or ingested or safety measures used. In most cases of asbestosis today in the US, blue-collar workers and military personnel who were exposed to asbestos at the workplace start showing symptoms after 10, 20 to 30 years. There are, however, many where the latency period is much shorter, depending on the amount of exposure and the immunity system a person has.

Asbestos miners and insulation workers could show symptoms after 12 to 20 years, while those employed in processing the mineral could exhibit signs of the disease after only five years on the job.

Other adverse environmental factors, like smoking or inhaling other toxins, increases the chances of developing asbestosis as well as decrease its latency period.

How pleural disease forms in the body?

The presence of pleural plaques is the biggest warning sign of an increased risk of mesothelioma and those diagnosed with this condition are strongly advised to attend regular medical check-ups for asbestos screening.

However, the condition itself is benign(non-cancerous) and often asymptomatic. The growths or "plaques" are comprised of largely inert hyaline tissue formed between the two layers of the pleura, which is the thin lining covering the lungs and chest area.

The mechanism that leads to pleural plaque formation is still not properly understood. Some researchers believe that asbestos fibers get inside the pleura through the lymphatic system, and hyaline tissue is formed as a means of protection against it.

Another theory places the blame on a type of immune cells found in the lungs called pleural macrophages, the production of which would be triggered by asbestos fibers. This autoimmune response will also cause inflammation and subsequent scarring of lung tissue, another non-cancerous condition called pulmonary fibrosis.

Asbestosis is a highly specific form of pulmonary fibrosis, but there is surprisingly little else to establish a direct causal connection between it and pleural plaques. Although the two conditions are almost universally caused by asbestos, there is no scientific evidence of one influencing the other in any way.

How lung cancer and mesothelioma forms in the body?

Sometimes when under prolonged duress, cells lose the ability to make functional replicas of themselves and start dividing into what is essentially a parasitic organism inside the body - the cancerous tumor.

In the case of severe asbestos contamination, the cells that most often become cancerous are those making up the mesothelium, which is the layered protective membrane covering the lung and other organs.

Asbestos affects these cells in more ways than just physical damage. It facilitates the production of free radicals, which cause further alterations to cell DNA. Fibers also trigger the production of oncoproteins, agents that allow cells to divide uncontrollably. This is the reason why mesothelioma tumors can grow so rapidly and the life expectancy of patients is so short.

Lung cancer is the most common diagnosis workers and family members will get years after the asbestos exposure occurred. 95% will get lung cancer detected before the disease would develop into mesothelioma.

Mesothelioma has a latency period of several decades, decreasing with time spent in a contaminated environment, which also dramatically elevates the chances of developing the condition. A French study found that people with one to seven years of occupational exposure to asbestos were 1.7 more likely to be diagnosed with mesothelioma than the baseline; those with 8 to 19, two times more likely; while 20 years increased their chances more than five-fold.

Although there are several occupational risk factors associated with mesothelioma, there is no other known cause for the disease other than inhaling or ingesting asbestos fibers daily.