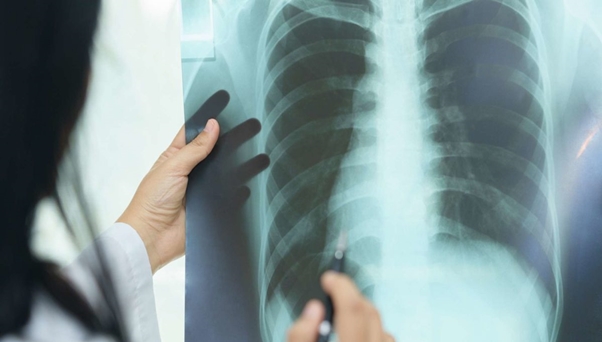 Because of the pathway by which asbestos enters the body - inhalation, the organs most commonly affected by asbestos exposure are the lungs. Bronchial cancer, also referred to as bronchial adenoma is a rare type of cancer that starts in the bronchi and bronchioles, the passageways to the lungs.

The major histologic types of bronchogenic carcinoma, include: 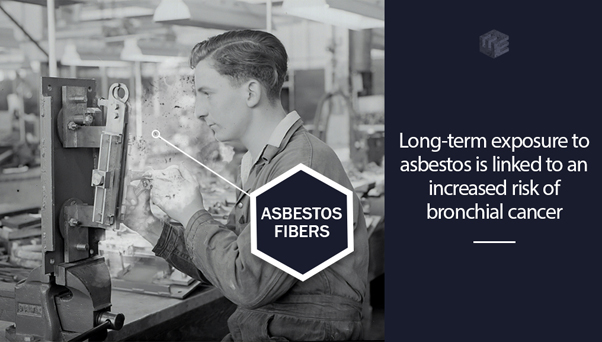 Asbestos is a group of six naturally occurring minerals that can be pulled into long, fibrous strands that are very flexible and have many remarkable durability and resistance to heat, properties conferring value in industrial use. Their consistency makes it easy to pack them into spaces as insulation and to combine them with other materials, including cement, textile, paper, cloth, or yarn, for added strength and durability. Prior to 1980, asbestos was used as an insulator in boilers and pipes of steam engines.

Airborne asbestos fibers are very easily inhaled. Although the body has several natural filter systems that prevent or slow down the inhalation of airborne particles, asbestos fibers are small enough to be breathed in and to enter the smallest areas of the lungs.

When you inhale, the air enters the body and travels down the trachea into the bronchial tubes. The trachea and the inside walls of the bronchi have a coating of mucus. Larger asbestos fibers are trapped in the mucus. There are tiny, hair-like structures called cilia lining these tubes, designed to move the mucus up and out of the bronchi where it can be expelled. Still, much of the mucus is swallowed and enters the digestive system. Wherever the fibers are, they have the potential to induce damage to the genetic material in the cells leading to carcinogenesis. A bronchial adenoma may present with a variety of clinical manifestations but the major findings are:

The approach to investigating a patient suspected of occupational respiratory cancer

To detect an occupational disease caused by exposure to hazardous dust such as asbestos, it is very important to carefully review the occupational history, auscultate the patient's chest, and perform lung function tests and radiography of the chest. It is essential to refer the patient to a pulmonary specialist who can decide all aspects of investigations and treatment. The X-ray must be checked by a B-reader, a doctor who has special training and certification in reading X-rays related to occupational lung diseases. A CT-guided biopsy should be performed if malignancy is suspected.

A 72-year-old male patient who used to smoke more than 15 cigarettes a day, and a retired pipefitter in a pipe manufacturing facility, presented to his general practitioner with chest pain, coughing up large amounts of bright red blood, a significant weight loss of almost 10 kg, no appetite, and persistent tiredness. His past medical history included a 5-year history of chronic obstructive pulmonary disease, 10 years of asthma, and treated pneumonia. The patient was referred to the respiratory team at a Pulmonology Clinic for further investigation under suspicion of bronchial carcinoma.

A repeat of the chest radiograph is mandatory in patients with a new chest radiographic abnormality, so the respiratory team decided to keep monitoring the patient and repeat the chest X-ray within 8 months. The previous lesion in the left lower lobe became a 10x15-mm spiculated nodule. These radiological appearances are indicative of a slow-growing bronchial carcinoma.

Because pipefitters worked so closely with multiple items that had asbestos in them, they are considered a high-risk group for developing bronchial adenoma. There are a lot of different products that are cut and sanded when it comes to being a pipefitter, thus, allowing asbestos dust to be released into the air then inhaled into the lungs.

Other occupations with great risk of asbestos exposure include:

Asbestos was also considered a miracle material for manufacturing military equipment and construction of barracks and other buildings for the armed forces. Asbestos' impact is still being seen today as illnesses associated with asbestos exposure, including bronchial cancer - often do not become evident for 10 to 40 years after exposure.

The U.S. military stopped using asbestos-containing materials in late 1970 after the knowledge of asbestos' danger became widespread, but the damage had already been done - thousands of service members had already been exposed to the hazardous material. The health damage was irreversible and for the majority of veterans, their only recourse was turning to the VA disability and health care benefits.

Attorneys at Environmental Litigation Group P.C. can review veterans' work and service history and file claims so former service members can receive the full amounts they're entitled to. If you're a United States military veteran who developed bronchial cancer from asbestos exposure during your active service, you have immediate eligibility and our staff and attorneys will prioritize your cases for expedited processing.