For the better part of the last century, asbestos was thought of as the miracle mineral by a wide range of industries, which would employ it for the manufacturing of over 5,000 different consumer products. During that time, asbestos was known as the "miracle mineral" for its durability, insulation, heat resistance, and fireproofing properties.

Although the employment of asbestos for commercial and industrial purposes has declined substantially since 1973, when a record amount of 804,000 metric tons of asbestos was used in the United States, mesothelioma remains a present-day disease. The only known cause of this aggressive form of cancer - that over 31,000 Americans fell victim to between 1999 and 2010 - is asbestos exposure. While exposure occurred in various settings, people who were in direct contact with asbestos in the workplace over several years are at the highest risk of developing mesothelioma - up to 10% will be affected by it. In fact, the vast majority of mesothelioma patients have a history of occupational asbestos exposure.

Factory workers were exposed to asbestos between 1930 and 1979

At the moment, there are over 3,000 confirmed sources of asbestos exposure, a large portion of which refer to factories such as:

During the last century, people who had a job in one of these work sectors inhaled asbestos dust on a regular basis, usually for many years. As a result, they are now at high risk for mesothelioma, as well as for other serious diseases related to asbestos exposure. Because mesothelioma has a long latency period, ensuing in two to five decades from the first exposure to asbestos, the number of new cases is expected to increase through 2025.

As the Industrial Revolution of the late 1800s began, asbestos seemed too good to be true. The versatile substance was perfect for a multitude of industrial applications. The fibers were resistant to heat, chemical damage, water, and electricity, making it the perfect insulator for newly coined steam engines and boilers of the day.

During World War II, asbestos use in the U.S. reached another peak, due to the huge increase in shipbuilding and weaponry needs. The U.S. Military wanted heat-resistant materials to stock their shipyards, and none of the branches were safe from exposure.

As early as 1906, company owners and manufacturers knew the dangers of asbestos, but it wasn't until the 1960s that a flurry of evidence and studies began to create a definitive link between asbestos and a variety of lung diseases.

Largest asbestos manufacturers in the U.S.:

Throughout the past century, asbestos had been manufacturers' favorite material, with more than 3.000 products containing the mineral at the time. While these were largely related to construction and industrial work in things like insulation, ceiling tiles, and drywall, textiles increasingly used asbestos as well. Products like rope, garments, and gloves incorporated the flame-resistant fibers, particularly in equipment for glassblowers and firefighters. By 1973, the U.S. consumption of raw asbestos had reached nearly 804,000 tons annually, with mines thriving on both coasts. According to the U.S. Geological Survey, approximately 174,000,000 metric tons of asbestos were produced from 1900 to 2000 worldwide.

Ways in which factory workers were exposed to asbestos 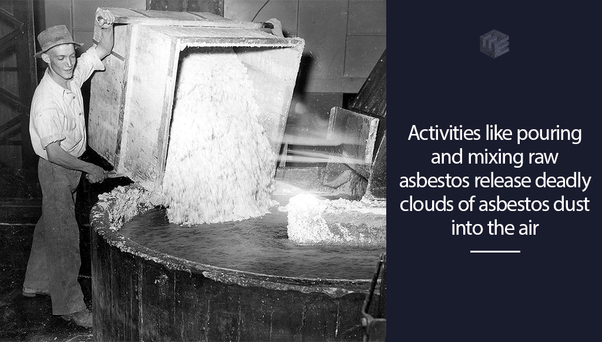 Asbestos has been declared a proven human carcinogen by the International Agency for Research on Cancer of the World Health Organization. Considering that all exposure is added to the overall risk of developing nonmalignant and malignant diseases, which usually take decades to develop, there is no "safe" lower limit of exposure. "The 0.1 fiber per cubic centimeter (f/cc) level leaves a remaining significant risk", as OSHA writes in its Asbestos Final Rule.

As the asbestos fibers migrate about the lungs, they cause scarring that worsens over time and can severely impair breathing. Eventually, sometimes 10 to 50 years after the initial exposure, these fibers can trigger genetic mutations to healthy cells in a person's body. As these cells mutate, they damage a person's DNA and begin to grow out of control. The growth of mutated, unhealthy cells leads to the development of cancerous tumors. Lung cancer causes the largest number of deaths associated with cumulative exposure to asbestos.

The significance of occupational asbestos exposure in women factory workers

In addition to workplace asbestos exposure as the primary cause, another important mesothelioma trend refers to gender. Since the heyday of asbestos use took place between the 1930s and the 1980s, both in the U.S. and throughout Europe, the better part of the jobs which involved asbestos exposure was held down by men. As a consequence, men are 4.6 times more likely to be diagnosed with mesothelioma than women, who account for only 8% of all cases. Nonetheless, the percentage of women who develop mesothelioma as a result of occupational asbestos exposure is actually much smaller, as it is a secondary asbestos exposure which usually causes this form of cancer in the female population.

Due to such a low prevalence, mesothelioma in women is insufficiently studied, even less when it comes to female patients whose diseases stem from workplace asbestos exposure. However, a recent study published in the Italian medical journal La Medicina del Lavoro reveals a series of novel aspects concerning pleural mesothelioma in doll factory workers, who had mainly been women throughout history. After analyzing the cases of three female workers who died of mesothelioma, researchers found the doll manufacturing companies they had been employed to be the source of asbestos exposure.

Work exposures currently cause 4% to 10% of all cancers in the U.S. You can be at risk of developing an occupational disease when your work exposes you to dust, fibers, chemicals, or fumes. Some of today's jobs at risk for constant or frequent exposure to dangerous and toxic chemicals include:

When claiming toxic exposure, a worker has to show that occupational exposure substantially contributed to the development or aggravation of a medical condition. Typically, in these types of exposure cases, the defendant will investigate the possibility that cigarette smoking or some other cause was the source of the injury, not the job conditions.

Exposed to asbestos in your work environment? Find out how we can help you

Filing an asbestos trust fund claim is a quick compensation option for patients diagnosed with asbestos-related conditions. The amount of compensation that a claimant may receive from an asbestos trust fund depends on various considerations like the type of illness caused by asbestos exposure, its severity, and the plan of payments that have been established for the trust fund. For example, a claimant with stage four mesothelioma and just a few months to live may receive more than someone with any treatable asbestos-related disease. To initiate the legal process, you will only have to send our resourceful attorneys your employment or military records, which you must retrieve, and your medical records.