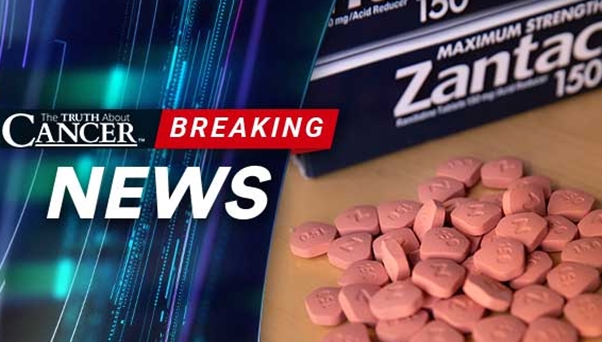 Case-control investigations in which the potential risks of bladder cancer associated with the ingestion of NDMA have been assessed. According to epidemiological studies, NDMA caused tumors in various species of experimental animals, at several different tissue sites, and by several routes of exposure.

As we presented in recent blog posts, the over-the-counter drug Zantac and other generic versions of the heartburn drug ranitidine have been taken off the shelves over growing concerns that the products may contain a cancer-causing substance. Valisure, an online pharmacy that analyzes drugs to verify their chemical contents before sending them to consumers, discovered that the drug, and others containing ranitidine, may produce potentially unsafe levels of n-nitrosodimethylamine (NDMA) - a hepatotoxic agent and carcinogen contaminant.

Considering the potential exposure to NDMA, the following types of cancer may be associated with long-term intake of Zantac or any other ranitidine product:

Humans may be exposed to NDMA through a variety of sources, but the oral route is the primary human exposure pathway. The U.S. Food and Drug Administration has currently provided safety limits for NDMA at 96 ng/day, but recent laboratory tests revealed that ranitidine products could have much higher levels.

Many chemicals, including N-nitrosodimethylamine, have been shown to be bladder carcinogens in experimental animals 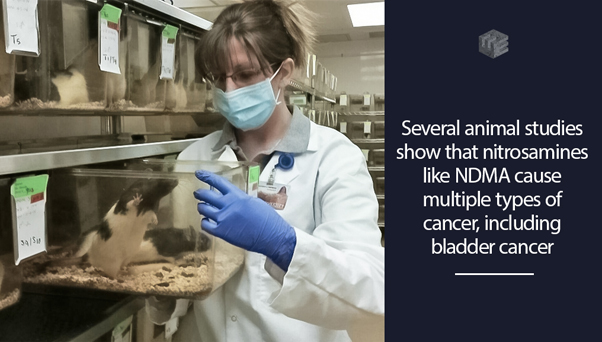 Tumors were observed in several different routes of exposure or additional species. For example, intravesicular administration caused benign and malignant urinary-bladder tumors in female rats. Studies dating back to 2016 concluded that following oral intake of ranitidine the urinary NDMA excreted over 24h increased 400-folds, suggesting a need to evaluate cancer risk from systemic exposure. Bladder cancer is associated with generalized mucosal changes involving all the organs covered with transitional epithelium, and it seems likely that this type of cancer is a consequence of exposure of the mucosa to carcinogens in the urine.

Researchers from the Ontario Institute for Cancer Research tested urine from 50 healthy men and found that ten of those men had N-nitrosamines in their urine. NDMA is a nitrosamine compound classified as a carcinogen by the International Agency for Research on cancer and the U.S. Environmental Protection Agency. Furthermore, out of 4 samples from bladder cancer patients, 2 contained nitrosodibutylamine, another type of nitrosamine. The scientists noted that one of the possible sources of these chemicals included the ingestion of drugs with these substances in the composition.

Each year in the U.S., about 56,000 men and 18,000 women are affected by bladder cancer, making it the fourth most common cancer among men.

The treatment and prognosis of bladder cancer depend upon how far cancer has penetrated into the tissue of the bladder, and how abnormal the tumor cells and tumor tissue look under a microscope. If the tumor is invasive but has not yet spread outside the bladder, the 5-year survival rate of people with bladder cancer is over 60%.

Bladder cancer most often causes blood in the urine, also called hematuria. Other symptoms may include:

Because other diseases may cause similar symptoms, a definitive diagnosis is derived from various tests and medical procedures such as cystoscopy, biopsy, urine cytology, and imaging tests. If cancer is detected, further testing is done to determine if it has spread. A missed or delayed diagnosis can allow cancer to spread deeper into the bladder muscle or beyond the bladder into other organs.

Being aware of the potential symptoms can help ensure you take action and receive the necessary medical care as soon as possible. If you have been using ranitidine for a while you should get in touch with your doctor for an evaluation, especially if you experience symptoms of anemia like fatigue and weakness, abdominal pain, or unintentional weight loss. It will be helpful to consult your regular physician or another trusted medical professional to determine the individual health risks you could face.

Following the wave of ranitidine recalls, many people have filed claims for financial compensation against the manufacturers of the most widely used drug to treat gastroesophageal reflux disease and peptic ulcers. The plaintiffs claim that the prolonged use of heartburn medication causes them severe illnesses and demands compensation for past and future medical expenses and pain and suffering caused by permanent or temporary disability.

Learning more about your legal rights can help reduce the power worry has over you and determine precisely how you will move forward. If you or a loved one were diagnosed with bladder or another cancer after taking Zantac and have questions you need to be answered, consult an experienced lawyer at Environmental Litigation Group for a free case review.