Were power plant workers exposed to asbestos on the job?

Yes. In fact, the workers subjected to the highest levels of exposure to asbestos were the machine operators, since they were constantly interacting with asbestos-laden equipment. Some workers would apply spray-on asbestos insulation directly on machinery, while others would cut and use sandpaper on insulation.

Power plants are indispensable in our world. With the use of generators, power plants - also known as power stations or powerhouses - transform mechanical power into the electrical energy we cannot imagine living without nowadays. At the moment, there are over 50,000 power plants in the U.S. Electricity is generally produced by burning fossil fuels such as natural gas, coal or oil, although some plants use nuclear power or renewable sources of energy (for instance, solar or hydroelectric energy).

Why was asbestos used in power stations?

As the process of generating electricity involves extreme temperatures and the risk of fire, combustion and overheating is ever-present, asbestos was frequently used for insulating machinery and equipment in power plants between 1930 and 1980.

Power plants are enormous facilities and for this reason, their proper functioning usually requires over 400 employees. While machine operators supervise the power generating equipment and ensure it works efficiently, distributors control the rate at which electricity is produced, and dispatchers examine demands to determine how much electrical energy the facility needs to generate.

The most common asbestos-containing products in power plants include:

Boilers, generators, turbines, valves, pumps, and gaskets were only some of the machinery and components where asbestos was used as insulation or to reduce friction. By working on maintaining and repairing this equipment, operators would inevitably release tremendous amounts of toxic fibers in the air, which they would subsequently inhale.

How were power plant workers exposed to the toxic mineral? 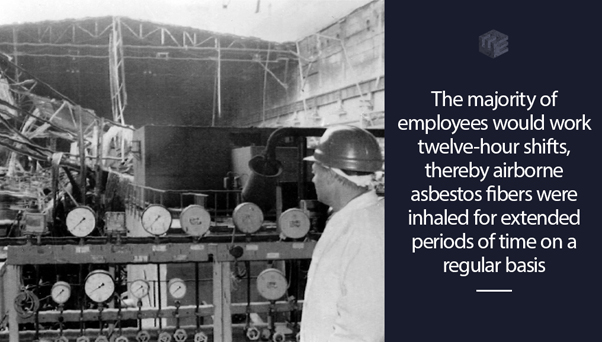 In power plants, asbestos was often used as thermal insulation for equipment and piping.

At first, you'd think the primary individuals at risk for asbestos exposure were insulation workers, and although they are at high risk, other power plant workers were similarly at risk of exposure:


Machine operators were another group of workers subjected to the highest risk of inhaling asbestos dust in power plants since they were constantly interacting with asbestos-laden equipment. Some workers would also apply spray-on asbestos insulation directly on machinery, while others would cut and use sandpaper on insulation, creating hazardous dust. Because power plants are facilities operating 24/7, the majority of employees would work twelve-hour shifts, thereby airborne asbestos fibers were inhaled for extended periods of time on a regular basis.

Distributors and dispatchers might have been exposed to the risk of inhalation of this carcinogenic mineral as well, as it was not unusual for the floors and roofs to be insulated with solid layers of asbestos. Poor ventilation, which was common in most power plants, only increased the duration of exposure.

Due to the astounding prevalence of asbestos use, nearly all power plants in the U.S. exposed their workers to this naturally occurring mineral throughout the past century. Our clients have worked in power plants across the country, including the following 43 states:

Have you been exposed to asbestos at a power plant? We can help you

The risk of developing a serious lung disease is very high for power plant workers. As a result of regularly handling asbestos-containing products on the job, thousands of people who worked in power plants before the 1980s have recently been diagnosed with pleural mesothelioma, lung cancer, asbestosis, and other diseases of the lung tissue. Due to their long latency, asbestos-related diseases occur within 20 to 50 years from the first occupational exposure.

Many power plant workers had no idea they were being exposed to asbestos. The sad news is that companies that built, supplied, and operated these facilities did know - and they still put workers at risk.

Numerous power plant workers have recovered financial compensation for their injuries throughout the past three decades by either filing a claim with the company's asbestos trust fund or, if the facility has not entered bankruptcy protection, by filing a legal claim.

If you were injured by asbestos exposure as a power plant worker, we strongly encourage you to seek legal guidance. To file a claim, you will only have to send our diligent attorneys your employment or military records, which you must retrieve, and your medical records.