Home   >   Our Official Blog  >  The Devastating Aftermath of Past Asbestos Use – Ambler, Pennsylvania

The Devastating Aftermath of Past Asbestos Use – Ambler, Pennsylvania 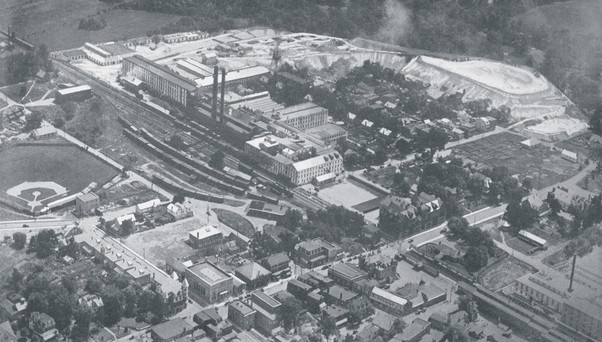 Although the cleanup projects were successfully completed in 1993 and the risk of exposure has been minimized, traces of asbestos might still be present in the town's soil and water, while 1,272 people in Montgomery County have lost their lives to asbestos-related deaths between 1999 and 2013.

While the cleanup operations conducted by the Environmental Protection Agency at the infamous former vermiculite mining site in Libby, Montana are nearly completed, numerous other towns throughout the U.S. are still struggling to eliminate the hazard of past asbestos use. Ambler, Pennsylvania is without a doubt one of the most severely affected regions. The town's long history of asbestos manufacturing has resulted in over 3 million tons of waste, popularly known as the "Ambler Piles" or the "White Mountains of Ambler" among residents, which are currently spread over 25 acres of land, serving as a grim reminder of Ambler's toxic legacy.

Ambler, a town situated approximately 16 miles of Philadelphia, had been the leading producer of asbestos insulation in the U.S. ever since 1875. However, it was not until 1881 that Ambler began manufacturing asbestos. The unprecedented rate at which the carcinogenic mineral was produced made the town own a reputation of "the asbestos-manufacturing capital of the world" within the industry. Additionally, in 1896, Richard Mattison, a young scientist, founded the nation's first asbestos textile plant in Ambler, which has significantly increased the town's already incredible use of asbestos by manufacturing fireproof curtains, brake linings, boiler insulation, and other similar products.

Over the course of approximately 44 years, enormous amounts of hazardous waste have been dumped at a 25-acre site located in proximity to a residential and commercial area commonly referred to as the Ambler Asbestos Piles Superfund Site, thereby endangering the lives of thousands of residents. It is estimated that the total volume of the asbestos-containing materials at the Ambler site exceeds 1.5 million cubic yards. According to a 2016 report from the Environmental Working Group, "the legacy of asbestos in the Philadelphia region is one of the worst in the country, with annual mortality rates from asbestos-triggered diseases far higher than the national average". The dumping of asbestos waste began in the 1930s and ceased in 1974, around the time when the minerals were officially recognized as a known human carcinogen by multiple government agencies.

So alarming was the town's asbestos issue that on June 10, 1986, the Ambler Asbestos Piles Superfund Site was included on the National Priorities List and intense cleanup operations followed shortly after. Nevertheless, despite the Environmental Protection Agency's incessant efforts to dispose of the waste, asbestos continues to represent a legitimate concern for the residents of Ambler. Although the cleanup projects were successfully completed in 1993 and the risk of exposure has been minimized, traces of asbestos might still be present in the town's soil and water, while 142 people in Montgomery County have lost their lives to mesothelioma between 2000 and 2009.

Montgomery County's mortality rate is shocking as well, with 19.1 deaths per 100,000 residents. This is nearly twice as high as the national average, which is roughly 11. "Ambler, Pennsylvania, is just one of many American communities still haunted by the most horrific and long-running public health crisis in history - asbestos waste contamination", said ADAO President Linda Reinstein. The Ambler Asbestos Piles Superfund Site was removed from the National Priorities List in 1996 when the Environmental Protection Agency finally declared it safe for human health. However, the havoc caused by the asbestos industry in Ambler still has a profound echo, as residents who were exposed to high levels of toxic minerals several decades ago continue to be diagnosed with lung cancer, asbestosis or mesothelioma.

In 2009, a second asbestos waste site in Ambler was added on the National Priorities List and cleanup operations have been relentlessly ongoing ever since. The BoRit site is comprised of a reservoir, a waste pile, and a closed park, and has been employed between the early 1900s and the 1960s by a manufacturing plant. The residential population near to this site could be potentially exposed to airborne asbestos. Despite the obvious hazard, there have been plans to build a multi-story housing complex in the area.

The Director of Policy and Prevention Education at the Meso Foundation, Diane Blackburn-Zambetti, has tackled the matter at the BoRit Asbestos Superfund Citizen Advisory Group Meeting in 2015. "If constructed, this apartment complex will be the first-ever residential housing project permitted on an asbestos waste disposal site in the United States. In the year 2015, we are still suffering asbestos exposures from an insulation factory dating back to 1875. If this complex is approved, we will see asbestos disease for many decades into Ambler's future", she stated. The construction project is currently on hold.

Potential risks that are likely to arise out of asbestos contamination at the BoRit Asbestos Superfund Site have been removed by the EPA. The cleanup and covering of all asbestos-containing materials were completed by 2017.

Victims of Asbestos Exposure in Ambler May be Eligible for Compensation

The majority of people who are now struggling with a cancerous or asbestos disease have been exposed to high levels of asbestos in the workplace. If you were a worker exposed to asbestos in the 1960s-1980s, the peak period of asbestos use, your current health problems could be asbestos-related, as asbestos has a long latency period. Occupations associated with asbestos exposure during the 1960s-1980s were mining and milling of raw asbestos, construction, product manufacture, use of end products. Sharing the workspace where others handled asbestos could have also been a cause of asbestos exposure.

Current and former residents of Ambler, Pennsylvania diagnosed with an asbestos-related disease, and their family members should contact us as soon as possible. The statutes of limitations are only two years from the date of the diagnosis (for personal injury asbestos claims) and the time of death (for wrongful death asbestos claims). In 90% of the cases, we file asbestos trust fund claims rather than going through a lawsuit. Our experienced attorneys will help you with the steps involved in the asbestos claim process.