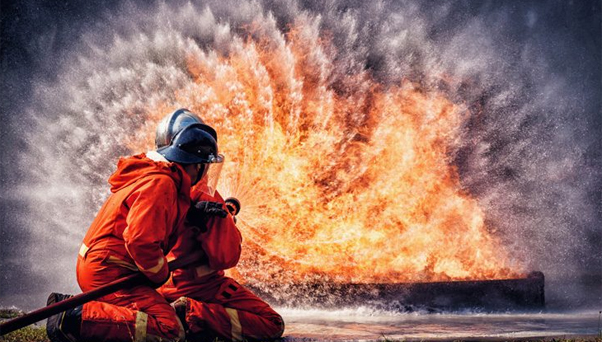 Following the discontinuation of PFOS and PFOA production in the early 2000s, as well as growing awareness regarding their toxic potential, the military decided to completely replace their aqueous film-forming foam solutions containing the two chemicals.

In a move that raised concerns from both independent research groups and some voices in the Department of Defense, all branches of the military opted to substitute PFOS and PFOA chemicals with other members of the same fluorocarbon class (PFAS) which were deemed safer by manufacturers.

Most of these new alternatives are differentiated from older PFAS by the length of their molecular structure. Whereas PFOS and PFOA form an eight carbon atom (8C) chain, some of the more popular new generation PFAS like PFHxS and PFHxA, only comprise of six carbon atoms (6C).

This is believed to keep them from accumulating inside the human body in dangerous concentrations, but recent studies have shown them to be responsible for similar health effects to 8Cs. For example, PFHxS has been already banned in most Nordic countries, after a number of Danish studies revealed it to have a high toxicological potential as well as a tendency to build up in the body.

As early as 2000, the Pentagon was advised by the EPA to avoid using fire foam containing PFAS chemicals altogether, but instead to "seek, test, and consider long-range alternatives". This warning was taken seriously by members of the Pentagon, and around the same time, the National Fire Protection Association held a meeting discussing the potential for phasing out all AFFF solutions from places like civilian airports and offshore oil platforms.

The fluorocarbon industry's answer to this new state of affairs came in the form of The Fire Fighting Foam coalition a lobby group started by DuPont and Dynax that eventually grew to comprise most of the big names in the business.

Headed by veteran lobbyist Tom Cortina, the group launched into an extensive campaign comprising of dozens of journal articles, conferences, presentations and meetings with EPA and DoD officials, where one basic line was pushed, that only PFOS and PFOA were toxic while 6C chemicals presented no reason for concern.

Their efforts bore fruit in October 2003, when the EPA decided to limit the regulations they were drafting for PFAS chemicals to 8C compounds only - the PFOS and PFOA that are still the only members of their class to be federally regulated today, while out of commercial production for over 17 years.

In a 2018 draft report on newer PFAS compounds, including GenX (PFHxS and PFHxA) and PFBS, the EPA does recognize their toxic potential but refrains for establishing a timeline for any sort of regulatory measures, including health advisories, testing and decontamination measures.

Right now, the various branches of the military only have to clean sites where at least 70 ppt of PFOS, PFOA, or a combination of the two had been tested for. This is proving costly enough as it is, and the price is expected to amount to as much as $2 billion once 8C has been removed from both military stockpiles and the environment.

Expanding the scope of the clean-up operations to other chemicals would increase the difficulty of the task manifold. First, a maximum threshold for safety would be reached more often, meaning that the number of locations qualifying for clean-up will increase. Second, due to their shorter molecular structure, 6C PFAS are a lot harder to filter, requiring more advanced technology and a substantial increase in costs.

According to reports by The Intercept, the military doesn't currently acknowledge the presence of PFOS and PFOA in concentrations lower than the EPA health advisory, or of any other PFAS contaminants as an ecological problem.

The Military Doesn't See Alternatives as Up to Par

Just as 3M was discontinuing PFOS in the early 2000s, one of their chemists came up with an effective fire suppressing formulation that didn't require the use of PFAS chemicals. During trials conducted by the Royal Air Force in 2002, this performed on par with an AFFF equivalent, extinguishing a jet fuel fire in 46 seconds.

PFAS-free foams will since be adopted by a number of civilian airports, including London's Heathrow, where they will see a first successful "test of action" in 2013 when a jet airliner fire was put out before any of the 70 passengers on board could come to any harm.

However, 3Ms new formulation was rejected by the Navy in 2004, after just one series of trials in which it failed to meet the required 30-second mark. Important to note, not even the fluorocarbon formulation it was pitted against were consistent in their results, which ranged between 25 and 36 seconds, the latter time only three seconds better than what the fluorine-free foam achieved.

Many expert firefighters opined at the time that more training might improve results, as the use of the new concoction required a somewhat different technique than what they were used to, but neither the USN nor other branches expressed any further interest in the solution since then.

Some might find the Navy's stringent requirements understandable in light of the particularly high risk an uncontrolled fire represents aboard an armed vessel, but this doesn't justify the reticence of any of the other services and does nothing to clarify how three seconds in an emergency situation measures up against lifelong health problems for tens of thousands of people.

What Can You Do If You've Been Affected?

If you are suffering from any of the conditions associated with PFAS exposure, including bladder, kidney, thyroid, and testes cancer, liver damage and high cholesterol, it is very important that you start by having your case reviewed by a lawyer who is experienced in these types of cases and who can understand the specifics of your situation and can determine whether it is worth proceeding or not.

Contact Environmental Litigation Group today in order to pursue full and fair compensation consisting in payment of medical bills and treatments you may need in the future, other economic loses including reduced earning potential in the future, and account for the pain and suffering you have endured as a result of your exposure to PFAS.