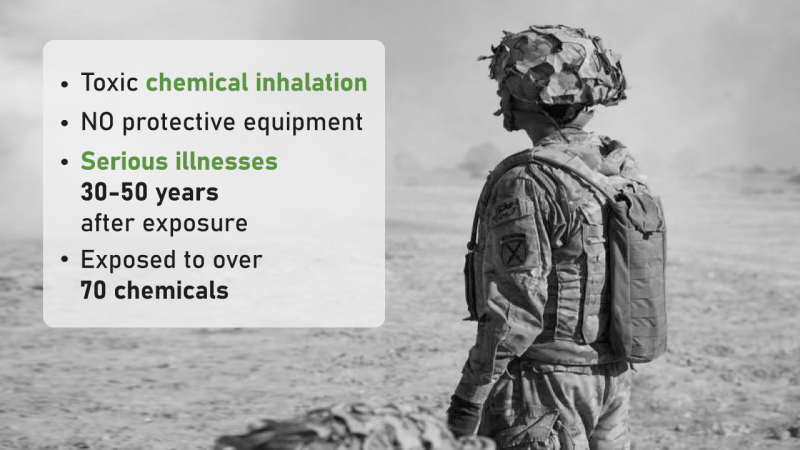 Breathing problems, hearing impairment, disorders affecting the lungs, and cancer, are just a few of the health issues that U.S. Air Force veterans exposed to toxic chemicals or defective products may suffer.

If you or your loved one is a veteran of the United States Air Force and was recently diagnosed with an illness caused by asbestos exposure, toxic exposure at military bases, PFAS contamination from the use of AFFF, and the use of defective 3M military earplugs you can claim financial compensation from both the VA and compensation claims.

We file claims on behalf of U.S. Air Force veterans and family members

Many U.S. Air Force veterans are living with illnesses triggered by exposure to toxic chemicals during their military service. These illnesses may show symptoms immediately or may cause long-term effects that go undetected for many years or decades until they cause irreversible, and costly clinical complications. Regardless, the VA will provide benefits to all veterans who can prove that their illnesses or injuries incurred in or aggravated by military service.

The United States Department of Veterans Affairs recognizes several types of military hazardous exposures, such as:

If you have been exposed to hazardous chemicals and toxins, and defective products while on active duty, consult our legal team to learn about your options for financial compensation. You might be able to receive payment for medical costs, lost earnings, pain, and suffering, in addition to your VA claim.

The use of asbestos in the U.S. Air Forces

The irony of asbestos use has often been pointed out: once much in use for its defensive properties as an insulator, fire retardant, etc., heavily employed because it seemed the perfect solution to alleviate the risk of potential fires in case of a malfunction or an attack, asbestos itself turned out to be an immense health hazard for those service members who came into contact with it.

Servicemen and women employed in the U.S. Air Forces were among those at risk, as a number of specific items in the Air Forces inventory used asbestos in various products virtually omnipresent in airplanes that needed insulation, such as:

Asbestos was also used in the construction of many Air Force bases and barracks, thus, many Air Force veterans may have been exposed to asbestos through items which include:

Whenever maintenance work was performed on an aircraft, or whenever repair work was conducted on buildings, asbestos fibers were released into the air and were most likely inhaled.

Our clients served at various Air Force bases throughout the country, including:

The lung diseases caused by exposure to asbestos are notoriously slow to develop, and veterans to this day are feeling the impact, as they are diagnosed with conditions from pulmonary fibrosis to lung cancer.

Undergoing a chest X-ray is the most reliable way of receiving an accurate diagnosis, because diseases such as lung cancer or mesothelioma tend to mimic symptoms of more common respiratory conditions such as:

If you served in the Air Force between World War II and the late-1970s, we strongly encourage you to reach out to our medical experts, who have vast experience in diagnosing diseases that stem from asbestos exposure. To promote timely detection and help Air Force veterans avoid misdiagnosis, we offer no-cost asbestos screenings at our location in Birmingham, AL to all veterans having early symptoms of pulmonary diseases.

Having a correct diagnosis can help the patient slow down the progressive disease and prolong their life expectancy, and also to recover the right amount of financial compensation they are eligible for, as asbestos trust funds pay out money depending primarily on their diagnosis.

The U.S. Air Forces were not immune to the promises of asbestos, and, although there were suspicions as to its negative health effects as early as the first decades of the 20th century, it appears that its benefits outweighed its dangers. It was only in the 1970s that the U.S. Armed Forces began to accept that the human cost in using asbestos was much too high, and asbestos use was cut down and heavily regulated.

Surviving spouses and dependents of Air Force veterans who have died from an asbestos-related illness as a result of their service may be to get a tax-free monetary benefit called VA Dependency and Indemnity Compensation. Eligible survivors can also receive compensation from one or more of several trust funds established to compensate victims and their families. If you lost a loved one to an asbestos-related disease let us explain how we can help you during this difficult time.

Those standards mandate the use of fluorinated chemicals, which has been designated as a possible carcinogen based on epidemiological evidence linking exposure to:

U.S. Air Force veterans diagnosed with one of the conditions mentioned previously due to the use of AFFF may be entitled to significant financial compensation.

At the U.S. Air Force bases and installations, the major source of the chemical contamination comes from the human-induced PFAS compounds:

The Air Force identified more than 200 installations in the U.S. with known releases of PFOS/PFOA and is still conducting site inspections.

While PFAS was the main toxic agent found at U.S. Air Force bases and installations, there were other dangerous chemicals endangering the health of the military members and their family members, such as:

If you were stationed on one of the above-mentioned U.S. Air Force bases, either alone or with your family members, you were likely exposed to these chemicals, which increase your risk of developing serious health conditions such as:

If you suffer from one of the above-mentioned diseases, you can count on Environmental Litigation Group, P.C. to identify and pursue all options available to you in order to maximize the compensation you recover.

3M’s Dual-Ended Combat Arms Earplugs were designed specifically for use by military personnel. Between 2003 and 2015, these defective earplugs were used by all branches of the armed forces, including the Air Force. 3M Corp. and its predecessor, Aearo Technologies Inc., became aware of flaws in the earplugs back in 2000 but failed to disclose this information to the military and even continued to sell the defective earplugs to the military.

The 3M Combat Arms earplugs never worked as claimed. The earplugs had two ends – a closed-end to supposedly block out varying levels of sounds and an open-end that supposedly blocked out high-intensity sounds stemming from aircraft while still allowing soldiers to hear conversations and orders around them.

Unbeknownst to the U.S. Air Force service members, a design defect caused the combat earplugs to loosen while being worn. This allowed for harmful impulse sounds to enter the soldiers’ ear canals and cause the very hearing impairments the combat earplugs were supposedly designed to prevent:

Current or former U.S. Air Force service members who believe they may have suffered hearing loss or developed tinnitus due to the use of 3M Combat Arms earplugs may receive disability or other service-related benefits.

Are you a U.S. Air Force veteran who struggles with a disease caused by toxic substances or defective products?

If you served in the U.S. Air Force decades ago and have just been diagnosed with an illness caused by toxic exposure at military bases, PFAS contamination from the use of AFFF, asbestos exposure, and the use of defective 3M military earplugs, you should act now by filing a claim for compensation. The legal process is simple, requiring minimal involvement on your part and no litigation. However, it is important to know that you will have to retrieve your military records and your medical records in order to file a claim. Our team of experts, who have been pursuing toxic claims since 1990, will promptly help you recover the financial compensation you deserve from the manufacturers of the products you were in contact with while serving in the U.S. Air Force and through a VA claim. Our standard fee is a 40% contingency fee. This means we only collect the fee once we recover compensation for you.