Endometriosis due to toxic hair relaxer 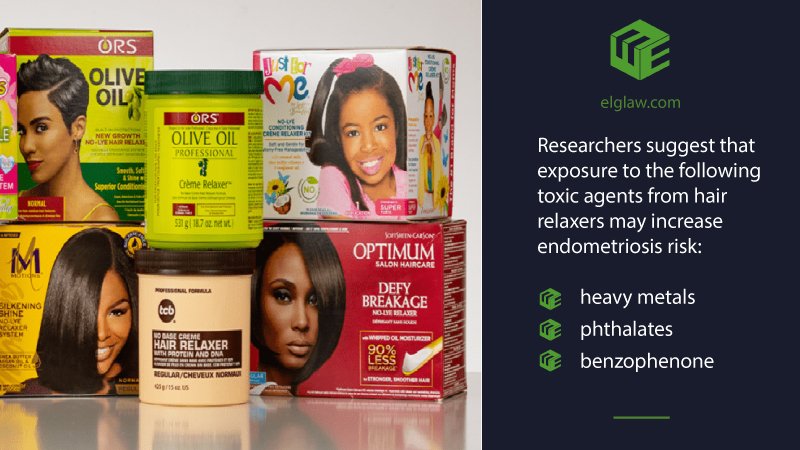 When tissue similar to the lining of the uterus grows outside the uterus, endometriosis occurs. Over 6 million women in the U.S. struggle with endometriosis. While it is not clearly known what causes the disease, there are several risk factors for it, such as exposure to endocrine-disrupting chemicals. Some chemicals lurking in hair relaxers, such as phthalates, can mimic estrogen in the body, which increases endometriosis risk, as a high level of this hormone is associated with the disease. Cadmium, a heavy metal found in some hair relaxers, is also linked to endometriosis, and so is benzophenone, a toxic chemical that might also be present in these products. If you have been using chemical hair relaxers and now suffer from endometriosis, we strongly encourage you to contact our law firm. Our attorneys, who specialize in toxic exposure and defective product cases, will help you find out whether you are eligible to file a claim.

The phthalates in hair relaxers are most likely to cause endometriosis

Endometriosis is a gynecologic disease that is estrogen-dependent, meaning that women who have a high level of this hormone in their bodies are more likely to develop it. At least 11% of women across the country have endometriosis. Because the phthalates in chemical hair relaxers are endocrine-disrupting, they can easily interfere with the hormonal system, thereby causing the release of great concentrations of estrogen. A study from the medical journal Fertility and Sterility found that endocrine-disrupting chemicals may be involved in the development and severity of endometriosis. Researchers suggest that exposure to the following toxic agents from hair relaxers may increase endometriosis risk:

Several medical studies have established that di-2-ethylhexylphthalate (DEHP) exposure is likely to cause endometriosis by increasing the production of the cells that lead to the disease. This phthalate is a probable carcinogen and was also found to be responsible for reproductive problems and infertility. A study from Reproductive Medicine and Biology mentions that sexually mature female rats exposed to DEHP showed a decrease in serum progesterone and delayed ovulation. Exposure to the phthalate affects endometrial cells in the following ways:

Exposure to heavy metals, especially cadmium, also has a connection with endometriosis, according to a recent study published in Science of the Total Environment. The researchers explored heavy metal concentrations in the blood and follicular fluid of over 600 women with and without endometriosis undergoing their first in vitro fertilization. Nearly all participants had traces of arsenic, cadmium, lead, and mercury in their blood and over 90% in their follicular fluid. These are some of the highlights of the study:

Women struggling with endometriosis who also have a history of hair relaxer use are advised to get in touch with our skilled legal team, as they might be entitled to financial compensation from the manufacturers. The legal process is simple and fast, requiring only a few documents. Our attorneys will review your case to determine whether you can file a toxic hair relaxer claim with the companies whose products you used.

If you have a diagnosis of endometriosis and have used chemical hair relaxers, you might be eligible for compensation. Before filing a claim, our legal team will have to assess your case to determine whether you qualify. The only documents we will need from you are your medical records and evidence of having purchased hair strengthening products. Because we are well aware of how difficult struggling with endometriosis can be, we will do all in our power to ease the legal process for you and take care of the most complex aspects.

Once we deem you eligible to file a toxic hair relaxer claim, your involvement in the legal process will be minimal, as our team will take care of almost everything on your behalf. Moreover, if during any step of the legal process you have to undergo a medical procedure, a family member can step in until you are available again. If you have a case, our attorneys, who have over 30 years of experience, will strive to obtain the most favorable outcome for your claim. Finally, it is important to know that our law firm works on a contingency fee basis.

Which chemicals in hair relaxers cause cancer? »

Which hair relaxers can cause cancer? »

Who is more likely to develop uterine cancer after using hair relaxers? »

What are other risk factors for endometriosis besides using hair relaxers? »

Why are Black women more affected by hair relaxers than white women? »