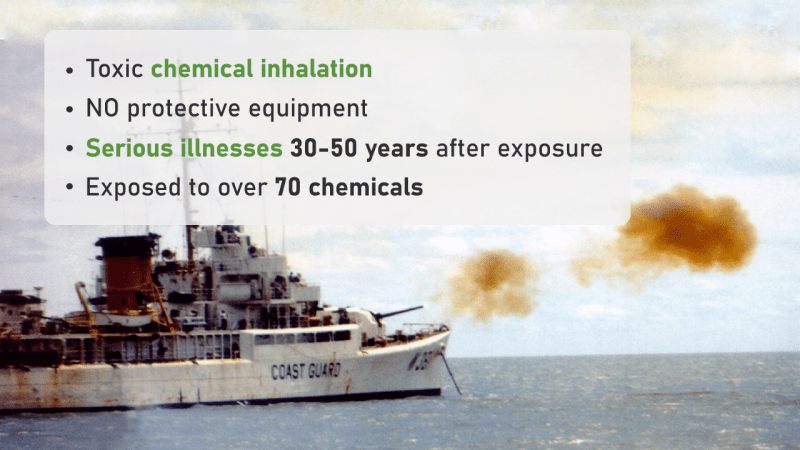 U.S. Coast Guard veterans can collect compensation for disabilities related to injuries or diseases caused by toxic chemicals or defective products during active military service. These benefits can be a financial lifesaver, but the claim process is complex and tedious, so you will have to be patient until you receive the compensation you deserve. This is especially true if their claim for VA disability benefits is denied.

If you developed a serious illness after serving in the U.S. Coast Guard, let our team of experts assist you in filing a legal claim.

At Environmental Litigation Group, P.C., our team is dedicated to putting your needs first and helping you get the compensation you deserve.

We file claims on behalf of U.S. Coast Guard veterans and family members

The use of defective 3M military earplugs, and the toxic, often carcinogenic, effects of exposure to naturally occurring minerals like asbestos, man-made chemicals such as PFOA, PFOS, and several other PFAS found in aqueous film-forming foam have injured thousands of veterans during their service, including U.S. Coast Guard veterans.

Our legal experts can help you file a claim for compensation by reviewing and applying current regulations while you focus on improving your health, if you are a veteran of the United States Coast Guard struggling with one or more illnesses resulted from military service due to:

Your case is unique, so let us respond directly to your needs by telling us about your individual circumstances and where your exposure occurred. There is no cost or obligation to speak with one of our legal experts, so contact us today.

These products include, but are not limited to:

Because of its insulating and fire-retardant properties, asbestos was initially hailed as a life-saver by the U.S. Armed Forces, and by civilian industries across the country. Its benefits seemed to know no bounds, and for decades all signs to the contrary were ignored. Most at risk among the Coast Guard servicemen and women were those directly exposed to asbestos in shipyard work, whether it was shipbuilding, maintenance, or repairs. Since asbestos is brittle and easily releases fibers into the air if not wet or if its surface tension is broken, exposure was almost impossible to avoid when doing work on older vessels.

Even mere travel on ships rich in asbestos products could expose the crew to toxic fibers since almost all insulating products between the 1930s and the 1970s contained asbestos. Boilers were among the richest in asbestos, followed by electrical insulation and asbestos reinforcement in walls around the ship. Practically anywhere you turned in the confined space of a Coast Guard ship, asbestos was sure to be there. And, on those ships or buildings that are still in use decades later, the danger is still there.

The use of asbestos in the U.S. Coast Guard

Coast Guard occupations with a high risk of asbestos exposure:

It’s important for patients and loved ones to note that many asbestos companies were forced to set up asbestos trust funds with adequate funds to pay out current and future claims, allowing veterans and their families to collect compensation years after the asbestos company was in operation. In addition to asbestos trust funds, members of the U.S. Military that have been diagnosed with asbestos-related diseases may be able to file a VA claim.

In order to claim compensation, the medical records that prove a diagnosis of an asbestos illness are required. Typically, it takes more than one doctor to reach a final diagnosis. As such, misdiagnosis is very common among asbestos victims.

When you seek the help of an expert, you’re much more likely to receive a prompt and accurate diagnosis that will allow you to go forward with the right treatment as soon as possible. To promote timely detection and help U.S. Coast Guard veterans avoid misdiagnosis, the medical specialists at Environmental Litigation Group, P.C. offer no-cost screenings at our facility in Birmingham, AL. If screening results show evidence of asbestos fibers in your lungs, you are eligible to file an asbestos trust fund claim and also a VA claim.

Surviving spouses and dependents of Coast Guard veterans who have died from an asbestos-related illness as a result of their service may be eligible for dependency and indemnity compensation. If their loved one has passed away from lung cancer, bronchial cancer, mesothelioma, asbestosis, and other asbestos-related pulmonary diseases, family members can also receive compensation from one or more of several trust funds created to provide financial compensation to victims and their families. Because the money comes from the asbestos trust funds which have been established to assist victims of asbestos exposure, the legal process involves no litigation and takes significantly less time to complete.

Because AFFF was the primary firefighting agent used aboard U.S. Coast Guard and Navy vessels for flammable liquid fires between the 1960s to the early 2000s, contamination with PFAS was inevitable.

The U.S. military has been heavily using PFAS-containing foam for fire suppression during non-critical missions and in training exercises in several of its branches, including the Coast Guard, since the latter part of the 60s. With decades of use by Coast Guard services personnel, it is possible that thousands of retired or active military firefighters have or will develop the following types of cancer from exposure to the dangerous compounds:

If you were diagnosed with a medical condition you believe is due to the exposure you suffered during service, our team of legal experts can help you with filing a claim on your behalf.

The Department of Veterans Affairs oversees an enormous number of benefits and services for veterans of our nation’s armed forces, including the Coast Guard. Unfortunately, many deserving veterans of the United States Coast Guard face initial denials of benefits and have to go through a confusing and time-consuming appeals process. The claim process is complicated and the paperwork and waiting time involved in filing a veteran’s compensation claim can be confusing, long, and frustrating. Whether you are just starting the application process, or your claim has been denied and are preparing an appeal, we know the law, the process, and we want to help.

The toxicity of PFAS is dominated by the perfluoroalkyl substances sub-group, perfluorooctanoic acid (PFOA) and perfluorooctane sulfonic acid (PFOS) due to the widespread occurrence of these components in the environment, with the ability for long-range transport far from the emission points. These chemical compounds are water-soluble and bio-accumulative, which means that they can easily be dispersed through air and water – and accumulate in the human body.

In addition to PFAS, there were other toxic agents found to lurk at hundreds of military sites, including U.S. Coast Guard bases and installations - which greatly endangered the health of military residents and their family members living with them:

Our team of experts with vast experience in toxic exposure cases will be of great help to you if you want to file a claim, as they will efficiently take care of the aspects entailed by the legal process, while your involvement will be minimal. You will only have to provide us with your military and medical records, documents that will stand as evidence of your exposure, and of related diagnosis in your toxic exposure claim.

To receive compensation on these grounds, it is necessary to show that you stationed on one of the U.S. Coast Guard bases and installations for at least one year and developed one of the following diseases:

Our experienced legal practitioners can help you understand the connection between that exposure and your current disabilities and answer questions about how to build your toxic exposure claim for benefits. Don’t hesitate to reach out to us to discuss your particular situation.

Due to the use of 3M Combat Arms earplugs, many U.S. Coast Guard veterans developed hearing problems

3M Combat Arms Earplugs were supposed to provide protection from damaging noises. However, the earplugs could not insert properly into the ear canal rendering them defective.

Before being sold in the United States, the CAEv2 earplugs had to be manufactured in accordance with American National Standards Institution standard S3.19-1974, as required by the Environmental Protection Agency regulations, under the Noise Control Act.

These earplugs were originally manufactured by Aearo Technologies Inc., and acquired by 3M Company in 2008, and allegations suggest that the CAEv2 earplugs were provided to the U.S. military after improper and methodically unsound test results.

If you served in the U.S. military - including the Coast Guard - between 2003 and 2015 and have hearing loss or related medical issues that you believe are the results of using 3M Dual-Ended Combat Arms Earplugs, please contact our expert team to discuss your potential claim for compensation.

Are you a U.S. Coast Guard veteran who struggles with a disease caused by toxic substances or defective products?

If you served in the U.S. Coast Guard decades ago and have just been diagnosed with an illness caused by toxic exposure at military bases, PFAS contamination from the use of AFFF, asbestos exposure, and the use of defective 3M military earplugs, you should act now by filing a claim for compensation. The legal process is simple, requiring minimal involvement on your part and no litigation. You will only have to retrieve your military records and your medical records and send these documents to our attorneys. Our team of experts, who have been pursuing toxic claims since 1990, will promptly help you recover the financial compensation you deserve from the manufacturers of the products you were in contact with while serving in the U.S. Coast Guards and through a VA claim. Our standard fee is a 40% contingency fee. This means we only collect the fee once we recover compensation for you.