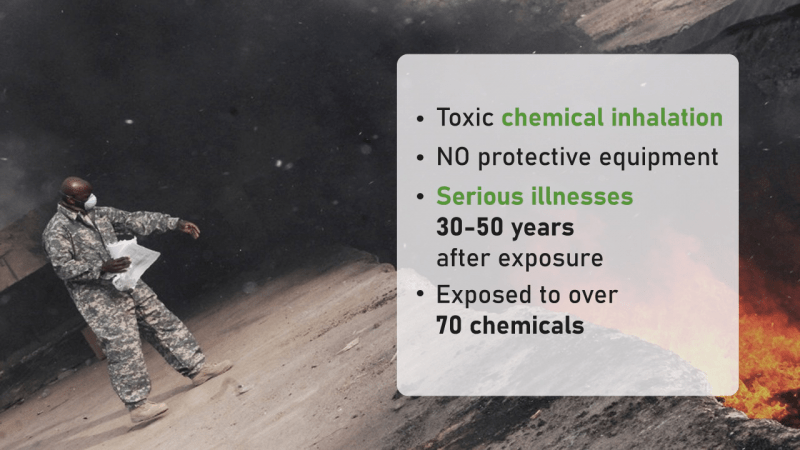 Exposure to chemical agents or defective products has always been a problem for our servicemen and women. Being exposed to a toxic substance can have life-altering consequences, including serious illness or death.

If you served in the U.S. Army decades ago and have just been diagnosed with an illness caused by asbestos exposure, PFAS contamination from the use of AFFF, toxic exposure at military bases, or the use of defective 3M military earplugs, you are eligible for financial compensation from compensation claims and additionally the VA.

We file claims on behalf of U.S. Army veterans and family members

Military service comes with a variety of operation-related hazards, but what is sometimes overlooked is that numerous servicemen and women often carry an elevated risk of illness due to:

A lingering cough. Trouble breathing. Fatigue. Loss of appetite. Pain that lasts. There are a lot of symptoms that could be the result of exposure to hazardous chemicals. You might live with them for a while before you feel it’s even necessary to seek appropriate medical care. Without knowing of previous exposure, a doctor might come away with a wrong diagnosis even when using reasonable care.

If you believe that you were or could’ve been exposed to toxic chemicals during your military service that might be causing your symptoms, it’s important for you to share that information with your doctor. Knowing that it might help him/her to make a timely and more accurate diagnosis and check for conditions that they might not otherwise. Once you receive a diagnosis, get in touch with a legal expert who will help you recover the financial compensation you deserve. Contact Environmental Litigation Group, P.C. to know what legal options are available for your specific situation.

The use of asbestos in the U.S. Army

The U.S. Army - one of the largest branches of the American military - began using asbestos-containing products and building materials in the 1930s. The toxic material was used throughout barracks, mess halls, hospitals, and other buildings where soldiers worked, slept, and ate.

Asbestos products U.S. Army veterans were exposed to include, but are not limited to:

Due to its confirmed toxicity, the military stopped using asbestos in large part in the 1970s, but this does not change the fact that there are entire generations of Army veterans that have done their service in toxic mediums breathing in asbestos fibers released into the air by the disturbance of asbestos-containing material during maintenance and repairs to various heat-related machinery and heavy-duty equipment on military bases.

Our clients served at various Army bases throughout the country, including:

When asbestos fibers become lodged in the lungs, they may cause inflammation and scarring, leading to the accumulation of DNA damage and the consequent increase of cancer risk. Establishing the diagnosis of asbestos-related diseases is not always a facile practice.

Unfortunately, misdiagnosis is very common among asbestos victims and is more likely to happen, especially when both the patient and the doctor ignore the past history of asbestos exposure. Early detection of asbestos lung-related ailments plays a crucial role in treatment strategies.

To promote timely detection and help U.S. Army veterans avoid misdiagnosis, we offer no-cost screenings at our medical facility in Birmingham, AL. If screening results show evidence of asbestos fibers in your lungs, you are eligible to file an asbestos trust fund claim and also a VA claim.

If you or your loved one is a veteran of the United States Army recently diagnosed with lung cancer, bronchial cancer, mesothelioma, asbestosis, or other asbestos-related pulmonary diseases, contact us today to learn about your legal rights. Even if a loved one has already passed away due to an asbestos-related condition, a spouse, child, or representative may still be entitled to VA benefits in addition to compensation from asbestos trust funds.

The U.S. Military has been using a special type of foam to fight fires for decades. The foam was extremely successful in extinguishing fires, particularly the ones where petrochemical compounds are involved. However, there are major health concerns associated with exposure to this foam. The very military firefighters who were fighting fires were being exposed to a cancer-causing product while working to stop the spread and re-ignition of fires.

While the aqueous film-forming foam itself is not classified as a carcinogen, the firefighting foam does contain several known carcinogenic compounds, meaning that it has been shown to cause certain types of cancer. This is because many AFFF types contain perfluorooctanesulfonic acid (PFOS) and perfluorooctanoic acid (PFOA) which both are possibly carcinogenic to humans. According to several studies, these chemicals in aqueous film-forming foams have been linked to a wide range of cancers, particularly cancer of the kidneys, bladder, and testicles.

The chemical-based firefighting foam was designed, marketed, manufactured, distributed, and sold by large companies, such as:

Their products have been used extensively throughout all military branches, including the U.S. Army, for over 50 years.

If you or someone you love has been affected by AFFF manufacturers’ failure to provide adequate warnings of the risks associated with their product, please feel free to contact our experts at Environmental Litigation Group, P.C., as you may be entitled to compensation.

Feel free to contact our experts at Environmental Litigations Group P.C. if you or someone you know were exposed to PFAS and other toxic agents such as:

Our job is to answer your questions, explain your legal options, and help you pursue the best solution if you stationed at U.S. Army bases & installations, and are now diagnosed with one of the following diseases:

Defective earplugs used by those who served in the U.S. Army linked to hearing disabilities

Thousands of veterans have been diagnosed with service-connected noise-induced hearing loss from exposure to repetitive exposure to loud noises, especially at the levels of gunfire, explosions, heavy machinery. For example, a single blast or gunfire may trigger a temporary bout of tinnitus.

With extended or repeated exposure to loud noise, tinnitus symptoms can be permanent and so severe that for many, it can interfere with everyday life. Unfortunately, there is no cure for tinnitus, although certain treatments can help diminish ringing sensations.

Veterans who served in the Army may have been exposed to machinery and vehicles that emit sound well over 85 decibels, such as:

The 3M Combat Arms Earplugs which were supposed to protect service members from loud noises during combat, were eventually found to be ineffective. As a result, a number of service members suffered from deteriorated hearing or hearing loss.

Allegations suggest that despite their awareness of the design defect and its potential to harm users, 3M continued to supply defective earplugs to our service members.

If you served in the U.S. Army between 2003 and 2015 and were issued 3M dual-ended combat earplugs and have been diagnosed with hearing loss or tinnitus, you may be eligible for compensation from two types of claims, a VA claim, and a 3M manufacturer claim.

Are you a U.S. Army veteran who struggles with a disease caused by toxic substances or defective products?

If you served in the U.S. Army decades ago and have just been diagnosed with an illness caused by toxic exposure at military bases, PFAS contamination from the use of AFFF, asbestos exposure, and the use of defective 3M military earplugs, you should act now by filing a claim for compensation. The legal process is simple, requiring minimal involvement on your part and no litigation. However, to expedite the legal process, you will have to retrieve your military records, as well as medical records, and send these documents to our attorneys. Our team of experts, who have been pursuing toxic claims since 1990, will promptly help you recover the financial compensation you deserve from the manufacturers of the products you were in contact with while serving in the U.S. Army and through a VA claim. Our standard fee is a 40% contingency fee. This means we only collect the fee once we recover compensation for you.