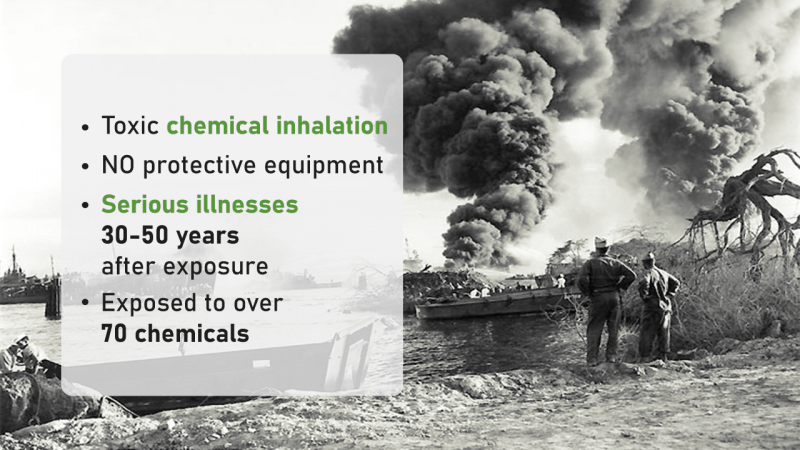 One very common cause of injury and disease in veterans who have served in the U.S. Marine Corps results from exposure to defective products and hazardous chemicals and toxins while on active duty, such as asbestos exposure, toxic exposure at military bases, chemical contamination from the use of PFAS-containing foams, and the use of defective 3M military earplugs.

Many Marine Corps veterans who were unknowingly exposed to chemicals and other toxic substances in service will develop debilitating diseases later in life, and these disabilities can form the basis for a VA claim.

Our law firm has the resources and experience to help you or a family member to file a compensation claim in addition to your VA disability benefits claim.

We file claims on behalf of U.S. Marine Corps veterans and family members

Numerous toxins can be found in military environments. Asbestos, PFOS, PFOA, and several other PFAS found in AFFF, are a few examples. During their service, members of the U.S. Marine Corps faced significant exposure to different types of contaminants, completely unaware of the hazards they were exposed to, and without any proper equipment to protect themselves. It may take years for the effects of these hazards to manifest, and when they do, a veteran’s health and overall well-being can suffer to a great extent.

Our expert team can guide your claim to a successful resolution while you can focus on your treatment, and spending time with your loved ones, if you are a U.S. Marine Corps member retiree who has just been diagnosed with an illness caused by:

If you are the spouse, parent, or child of a U.S. Marine Corps veteran who died from a service-related illness, you may be eligible to get a tax-free monetary benefit called VA Dependency and Indemnity Compensation.

The use of asbestos in the U.S. Marine Corps

The U.S. Marine Corps deliver combined-arms support anywhere needed, generally using the mobility provided by the Navy. Because of this fact, U.S. marines were exposed to the same dangers as the Navy servicemen and women, since asbestos-rich products were and are still around.

Asbestos products U.S. Marine Corps veterans were exposed to include:

The U.S. Armed Forces started restricting and heavily regulating the use of asbestos in army products in the 1970s; however, thousands of vehicles, barracks, and products built or made before that time are still rich in this toxic mineral.

Our clients served at various Marine Corps bases throughout the country, including:

To help veterans who served in the U.S. Marine Corps avoid misdiagnosis, we offer screenings

Misdiagnosis is quite common and is more likely to happen, especially when doctors are unaware of a patient’s history of asbestos exposure - without knowing of previous exposure, doctors may fail to connect a patient’s symptoms with an asbestos-related disease. Getting the right diagnosis from a medical specialist as soon as possible is critical to receiving life-extending treatments and also to recover the right amount of financial compensation they are eligible for, as asbestos trust funds pay out money depending primarily on their diagnosis.

We strongly encourage you to reach out to our medical experts, who have vast experience in diagnosing diseases that stem from asbestos exposure, if you served in the U.S. Marine Corps and experience symptoms like:

To promote timely detection and help Marine Corps veterans avoid misdiagnosis, we offer no-cost asbestos screenings at our location in Birmingham, AL, to all veterans having symptoms of pulmonary diseases.

Surviving spouses and dependents of Marine Corps veterans who have died from an asbestos-related illness as a result of their service may be eligible to get a tax-free monetary benefit called VA Dependency and Indemnity Compensation. Eligible survivors can also receive compensation from one or more of the several trust funds established to compensate victims and their families. If you lost a loved one to an asbestos-related disease let us explain how we can help you during this difficult time.

Oftentimes, veterans who were victims of asbestos exposure refuse to seek financial compensation during their lifetime or they tragically pass away before the conclusion of their claim. In such circumstances, surviving spouses and dependents can step in and can either file a claim with asbestos trust funds to recover compensation on behalf of their loved one or, if the victim had already filed an asbestos claim before death, they can bring the process to fruition. Regardless of your situation, we can help you get the information and resources you need.

The U.S. Marine Corps historically used firefighting foam containing toxic chemicals known as “forever chemicals”. The chemicals - the perfluoroalkyl substances (PFAS) perfluorooctane sulfonate (PFOS) and perfluorooctanoic acid (PFOA) - which were used in firefighting foams to rapidly extinguish fuel fires and protect against catastrophic loss of life, have been linked to some types of cancer and birth defects.

If you are a U.S. Marine Corps veteran and you have reasons to believe that your health problems might have been caused or exacerbated by exposure to PFAS, see your occupational healthcare provider and document your exposure. It is required that military firefighters have their blood tested for PFAS chemicals, as the chemicals do not break down over time and are known to build up in the human body. Over time, this build-up can lead to the development of multiple types of cancer:

If you, or a loved one, have been harmed by exposure to the PFAS in the fire suppressant AFFF, and later diagnosed with one of the above-mentioned diseases, get in touch with our experts who will help you recover the financial compensation you deserve.

For decades, active duty Marines, their spouses, and their family members have lived in on-base houses and neighborhoods laced with cancer-causing chemicals. For instance, from the 1950s through the 1980s, people living or working at the U.S. Marine Corps Base Camp Lejeune - one of the largest Marine Corps Base on the East Coast - were exposed to certain harmful chemicals, including PFAS.

According to the VA, up to 900,000 military personnel and their family members were stationed at the U.S. Marine Corps Base Camp Lejeune between 1953 and 1987, numerous of whom came to struggle with life-threatening medical conditions as a result of exposure to the chemicals present in the area.

The number of Marine Corps bases and installations with known contamination or suspected discharges of PFAS, continues to rise, according to an environmental advocacy group keeping tally based on information obtained from the Defense Department.

In addition to PFAS, which was the primary contaminant, there were other dangerous chemicals present on U.S. Marine Corps bases and installations that active-duty Marines and veterans may have been exposed to:

If you are a veteran or a family member of one who was stationed on one of the U.S. Marine Corps bases for at least one year and developed a severe disease, you are eligible for compensation, which our experienced legal team will help you recover.

In addition to the various other risks inherent to military operations, the use of 3M Dual-Ended or Reversible Combat Arms Earplugs, also known as CAEv2, was a constant danger for U.S. Marine Corps serving in combat zones between 2003 and 2015. These military-issued earplugs were defective, leading to hearing loss and tinnitus.

Our team of experts is filing claims related to the 3M Combat Arms earplugs and the subsequent hearing loss and tinnitus reported by veterans and active-duty Marines.

If you served in the U.S. Marine Corps and experience the following signs of hearing loss, it is advisable to see a physician and audiologist to diagnose the condition and to explain treatment and management options:

In the unfortunate event that you developed a hearing disability as a consequence of using 3M Combat Arms earplugs, you are eligible for two types of claims, a 3M manufacturer claim, and a VA claim. We can help you with both.

Are you a U.S. Marine Corps veteran who struggles with a disease caused by toxic substances or defective products?

If you served in the U.S. Marine Corps decades ago and have just been diagnosed with an illness caused by toxic exposure at military bases, PFAS contamination from the use of AFFF, asbestos exposure, and the use of defective 3M military earplugs, you should act now by filing a claim for compensation. The legal process is simple, requiring minimal involvement on your part and no litigation. Still, you will need to retrieve your military records and your medical records and provide these documents to our attorneys before they can file a claim. Our team of experts, who have been pursuing claims since 1990, will promptly help you recover the financial compensation you deserve from the manufacturers of the products you were in contact with while serving in the U.S. Marine Corps and through a VA claim. Our standard fee is a 40% contingency fee. That means we only collect the fee after we recover compensation for you.