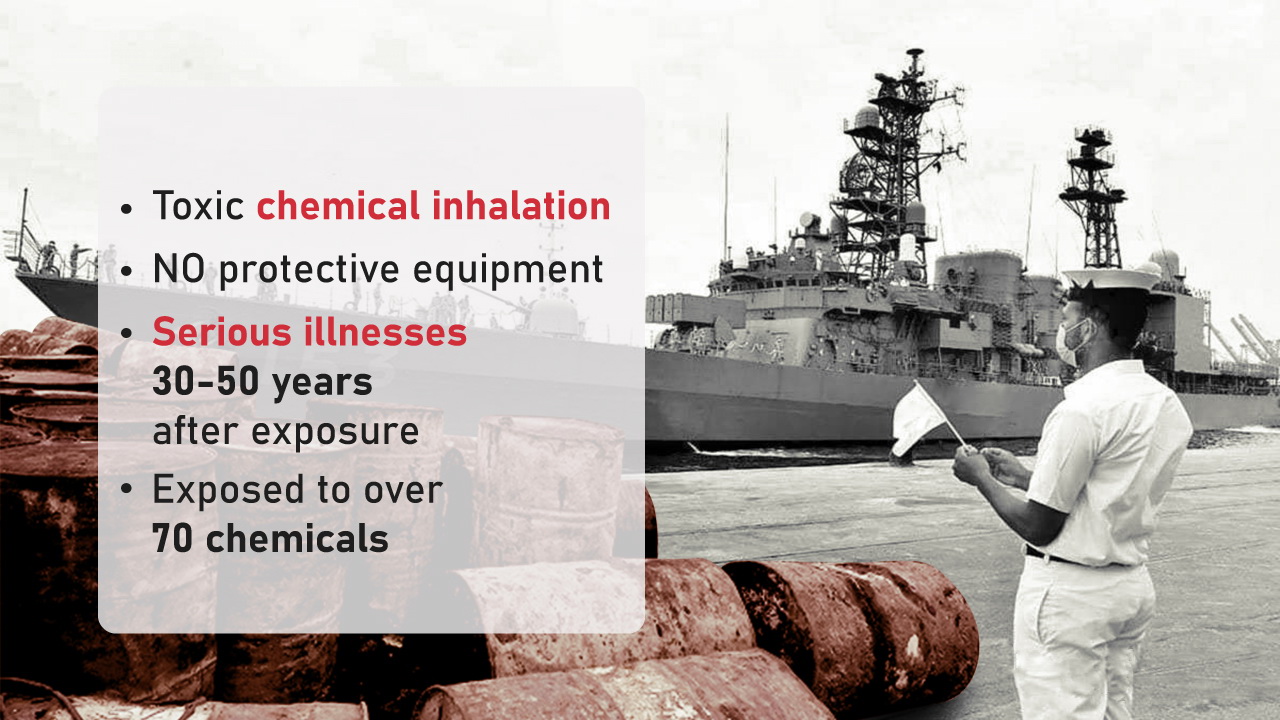 Completely unaware of the hazards they were exposed to, and without any proper equipment to protect themselves, Navy personnel faced significant exposure to different types of contaminants while serving on active duty.

From service members exposed to synthetic PFAS-containing foams or asbestos-containing materials to exposure to high levels of noise in the engine room, ranging between 98 to 160 adjusted decibels, it’s clear that the U.S. Navy veterans are highly likely to develop serious illnesses due to their military service.

If you are a Navy member retiree who needs assistance with your toxic substance exposure or defective product claim, our expert team can help you.

We file claims on behalf of U.S. Navy veterans and family members

When people think about disabling conditions that could affect veterans, they typically focus on physical wounds incurred in combat or mental health problems such as depression, or anxiety. However, another major cause of veterans’ disabilities is exposure to hazardous substances and defective products.

The following list of hazards is by no means exhaustive, but it should give you a better idea of the types of exposure that may qualify you for financial compensation:

If you developed a serious illness after serving in the U.S. Navy, you may qualify for VA disability pay, health care benefits, and other benefits if you:

Our expert team can help you file a compensation claim in addition to your VA disability benefits claim.

Aqueous film-forming foam is the primary firefighting agent used aboard U.S. Navy vessels for flammable liquid fires. The Department of Defense knew that the firefighting foam used on military bases and Navy ships that contains fluorinated surfactants is toxic but continued its use.

Here is a timeline of internal DoD reports detailing how much they knew about the dangers of using PFAS-based firefighting foam:

Firefighting foam has been linked to kidney, testicular, pancreatic, bladder, prostate cancer, leukemia, lymphoma, and neuroendocrine tumors in Navy firefighters who were routinely exposed to fluorinated chemicals now known as PFAS, classified as group 2B, a possible human carcinogen by the International Agency for Research on Cancer (IARC) in 2016.

If you are a Navy veteran who has experienced one of the conditions mentioned previously and you were exposed to AFFF, you may be entitled to significant financial compensation.

Navy veterans and their families who lived at bases across the country are facing a high rate of life-threatening conditions, including cancer, due to the chemicals in the water, soil, and facilities.

Toxic substances on Navy installations can affect a service member’s health and may result in long-term consequences. Navy veterans who served on these installations may have been exposed to:

Navy installations that have records of toxic exposure issues:

If you developed one of the following diseases as a result of toxic exposure while stationed at Navy bases & installations, whether you are a veteran or a family member of one, you are entitled to financial compensation through a compensation claim and also additionally through a VA claim.

The sources of noise in the U.S Navy are as varied as the activities carried out by the service members. Obvious sources of potentially hazardous noise are weapons systems and internal combustion engines, aircraft, and communication systems.

As a result of the use of defective 3M Combat Arms earplugs Version 2 (CAEv2) during training exercises and/or combat missions, many active-duty Navy personnel and veterans will come to suffer from permanent hearing loss or tinnitus, in the foreseeable future. Current or former members of the U.S. Navy who believe they may have suffered hearing loss or developed tinnitus despite using 3M earplugs should see their doctor to be tested for hearing impairments.

Our team of experts is submitting claims on behalf of United States Navy veterans who have suffered hearing loss or developed tinnitus due to defective Dual-Ended Combat Arms Earplugs. The earplugs were manufactured by 3M – an American multinational conglomerate corporation based in Minnesota, and its affiliated company, Aearo Technologies, which distributed the earplugs to members of the U.S. Military worldwide, including servicemen and women who were deployed between 2003 and 2015.

Navy personnel who used these 3M earplugs and have suffered ear damage should contact an experienced legal adviser at their earliest opportunity as all claims have time limits known as the “statute of limitations” which limit the time you have the right to file a legal claim.

Although as early as the beginning of the 20th century there were suspicions regarding the health hazards posed by asbestos, the U.S. administration and private companies refused, for a long time, to investigate the issue and to minimize and regulate the uses of asbestos. The U.S. Navy was among the most reticent; as a result until the early 1980s asbestos was used in hundreds of products that posed serious health risks for the servicemen and women working in their close proximity:

For the better part of the last century, asbestos was present in over 300 different products on U.S. Navy ships. Consequently, anyone who spent time on a military ship was inevitably exposed to this hazardous mineral, which today is known to cause numerous awful, often life-threatening diseases.

Approximately 30% of lung cancer patients are veterans. If you were aboard any of the following U.S. Navy ships, you were also exposed to asbestos:

Areas of the ship with the heaviest asbestos exposure

While asbestos exposure affected everyone who was present on the U.S. Navy ships before 1980, when asbestos use was finally regulated in the military, there were certain areas on the ships where asbestos exposure occurred to a great extent. People who spent a long time in these areas were heavily exposed to asbestos, which may result in the development of a terrible disease over the years. For this reason, we strongly encourage veterans who were present for a long time in the following ship areas to undergo regular medical examination, as they are at high risk of developing a disease such as lung cancer or mesothelioma:

Navy veterans are commonly misdiagnosed with the wrong pulmonary diseases

It is crucial to know that, because the diseases which can ensue from asbestos exposure take a long time to develop, the risk of illness remains throughout your lifetime if you are a Navy veteran. Another important aspect you should be aware of is that oftentimes, people who come to suffer from such a disease do not experience symptoms until it is too advanced to respond to treatment. Therefore, undergoing regular screenings is vital if you have a history of military asbestos exposure. Early diagnosis is instrumental and can even save your life or at least prolong it to a great extent. A simple chest X-ray can reveal the presence of asbestos fibers in your lungs, as well as whether the mineral has caused any damage hitherto. Other important tests and procedures diagnosing asbestos-associated lung diseases include:

To promote timely detection and help Navy veterans avoid misdiagnosis – which is unfortunately very common among asbestos victims – the medical specialists at Environmental Litigation Group, P.C. offer no-cost screenings in Birmingham, AL. All you have to do is provide our experts with your most recent chest X-rays and, after a careful evaluation, they will let you know whether there is cause for concern with regard to the health of your lungs. Benefiting from a second opinion is extremely important when it comes to diseases caused by asbestos exposure, as assigning a correct diagnosis is a challenging task even for the most experienced specialists.

If you lost a loved one to an asbestos-related disease, you are eligible for financial compensation

Surviving spouses and dependents of Navy veterans who have died from an asbestos-related illness as a result of their service may be eligible for dependency and indemnity compensation. Since 1990, the lawyers at Environmental Litigation Group, P.C. have been assisting veterans injured by asbestos, who can now easily recover the compensation they deserve. We will also provide legal assistance to families who lost a loved one under these circumstances.

If their loved one has passed away from lung cancer or another asbestos-related disease, family members can also receive compensation from one or more of several trust funds created to pay victims and their families. Because the money comes from the asbestos trust funds which have been set up by liable companies within the past three decades, the legal process involves no litigation and takes significantly less time to complete than a regular lawsuit.

Are you a U.S. Navy veteran who struggles with a disease caused by toxic substances or defective products?

If you are a Navy veteran recently diagnosed with an illness that is associated with active duty and caused by toxic exposure at military bases, PFAS contamination from the use of AFFF, asbestos exposure, and the use of defective 3M military earplugs, you should act now by filing a claim for compensation. The legal process is simple, requiring minimal involvement on your part and no litigation. Our team of experts, who have been pursuing toxic claims since 1990, will promptly help you recover the financial compensation you deserve from the manufacturers of the products you were in contact with while serving in the U.S. Navy and through a VA claim.