Prostate cancer due to AFFF

Known to accumulate and persist in the human body in very high concentrations, PFAS, a group of over 5,000 harmful chemicals, have been associated with many negative health effects on the male reproductive system. Exposure to PFAS can result in prostate cancer in firefighters, among other serious diseases. PFAS are the key component in the fire suppressant AFFF, which has been used in tremendous amounts by civilian and military firefighters since 1967. Prostate cancer is the most common malignant disease among firefighters, accounting for 13.7% of all cancers occurring among this occupational group. If you are a firefighter struggling with this disease, please contact our attorneys, as you may be entitled to financial compensation.

Prostate cancer is the most common malignant disease occurring among firefighters

The World Health Organization's International Agency for Research on Cancer has classified PFOA as possibly carcinogenic to humans- Group 2B carcinogen, based on epidemiological evidence linking exposure to:

What is prostate cancer and how can PFAS contribute to it?

Prostate cancer occurs in the prostate, a walnut-shaped gland just below the urinary bladder that is responsible for producing the seminal fluid which transports sperm. It is suspected that when enough damage occurs to its cells' DNA, these cease their normal function and start dividing uncontrollably into a tumor.

Prostate tumors tend to grow slowly and sometimes might not even require treatment, but aggressive forms of this cancer are by no means a rare occurrence.

The most harmful forms of PFAS, namely PFOA and PFOS which have been used for years as ingredients in firefighting foams, are known to accumulate in the body to very high concentrations.

While some 50% of PFAS gets stored in the blood, liver, and kidneys, the rest can virtually affect any tissue of the body, including the prostate and bladder.

Most men with early prostate cancer don't have any warning signs or symptoms. If cancer has spread outside of the prostate gland, symptoms may include:

Recently, the Michigan PFAS Science Advisory Panel found that a person exposed to the currently established safety limit for PFOA/PFOS of 70 parts per trillion would have a blood serum level of PFAS in the same range as the blood serum levels where adverse health outcomes have been observed in human studies. If you are concerned and choose to have your blood tested for PFAS, the test results will tell you how much of each PFAS is in your blood.

A longitudinal study that tested Kent County, MI residents who have been exposed to PFAS over three five-year increments found that the rate for prostate cancer was considerably higher in this cohort than in the general population.

Similar assessments of contaminated populations from around the country are currently being undertaken and most specialists are inclined to believe that their results will corroborate the Michigan team's findings.

Due to the concern raised by some scientific studies, the U.S. Environmental Protection Agency has determined that there is "suggestive evidence for carcinogenic potential" for PFOA in humans. Upon reviewing the available scientific literature on PFAS, a University research panel concluded: "the more we seem to know about these chemicals, the more dangerous they appear to be". 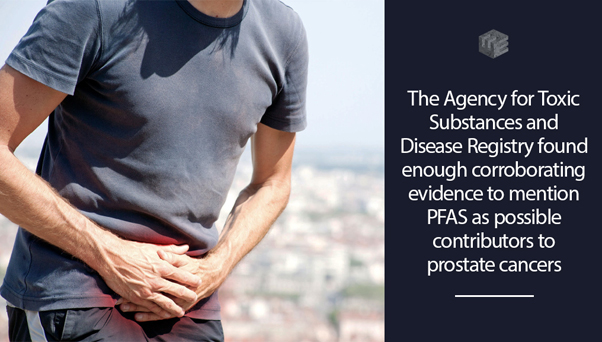 More recent studies show that firefighters are at a 28% greater risk to develop prostate cancer compared to the general population.

The Australian Health Protection Principal Committee, the Australian University, as well as the Agency for Toxic Substances and Disease Registry found enough corroborating evidence to mention PFAS as possible contributors to prostate cancers in their respective reports on the potentially harmful effects of these substances.

AFFF was often used to fight fires but also for training purposes. In addition, the highly efficient type of fire suppressant agent was washed from fire trucks in fire stations bays after responding to fires.

Hundreds of military installations identified to have PFAS contamination

There are various routes through which PFAS chemicals may enter your urinary system. People exposed to the compounds in question are at risk of developing cancer because these chemicals get into the blood through the gastrointestinal wall and eventually into the urinary tract, and accumulation of perfluoroalkyl substances in human tissues leads to prostate cancer.

For decades, the Department of Defense (DoD) has been using AFFF, despite warnings regarding its toxicity. Not long ago, the DoD has admitted that elevated levels of highly fluorinated chemicals were detected when the soil at military sites was initially screened for PFAS.

At this moment, about 206 military sites have been identified with PFAS contamination levels at hundreds of times the amount considered acceptable by the Environmental Protection Agency, although no formal national standard has been created. As the investigation continues, there are high chances of these numbers to grow. Amongst the sites that were tested, there were various branches of the military identified:

Unfortunately, prostate cancer is not always diagnosed soon enough, or it is misdiagnosed as other noncancerous conditions of the prostate:

These conditions are quite common and can affect men of all ages. Half of the men who were told they had a less serious condition, in fact, had more serious cancer. Misdiagnosis or delayed treatment of prostate cancer is especially tragic because it typically responds well to early treatment.

If you are concerned about any symptoms or a change in symptoms, be sure to talk with your healthcare team. Your doctor will ask how long and how often you have been experiencing the symptoms, in addition to general occupational history questions. Blood tests for PFAS may provide information on current PFAS serum levels and might be needed by your primary care providers and/or urologists to establish potential links between exposure levels and prostate cancer.

The number of U.S. firefighters exposed to dangerous concentrations of PFAS by both industry and Government neglect is estimated to range in the millions. Those whose health has been harmed by these dangerous chemicals should not be expected to bear the financial burden of treatment alone. If you have reasons to suspect that PFAS exposure might have contributed to your health problems, please don't hesitate to set a free appointment with one of our lawyers. As a veteran, you will need to retrieve your military records and your medical records if you intend to file a claim and send these documents to our specialized attorneys.