PFAS chemicals could cause neuroendocrine tumors 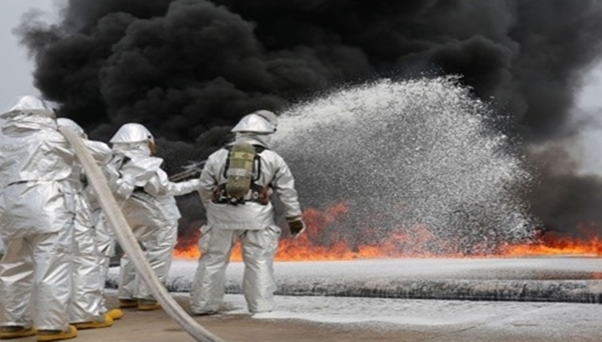 PFAS chemicals that make up the active ingredient in aqueous film-forming foams have been shown to be highly persistent, highly mobile, and to accumulate in organisms faster than they are excreted. Due to their ability to interfere with hormonal systems, they act as endocrine-disrupting chemicals.

Some substances in the environment -air, soil, or food sources, personal care products, and manufactured products are known as endocrine disruptors that interfere with the normal functions of hormones.

Dubbed as the "forever chemicals", PFAS do not break down in the environment or in the human body, causing them to bioaccumulate over time. Preliminary evidence suggests significant health effects associated with exposures to emerging PFAS chemicals, such as:

The endocrine system is made up of several hormone-producing glands, like the thyroid, the pancreas, the testes, and the pituitary, as well as special cells called neuroendocrine. In a broad sense, hormones are the body's way of sending messages to its own cells and organs and are used to control vital functions like growth, reproduction, lipid and sugar metabolism, just to name a few.

It's long been established from toxicological research that exposure to PFAS chemicals leads to effects similar to what we would expect in the case of a severe hormonal imbalance. Even in very small doses, PFAS alters fetal growth and mammary gland development in lab animals, while a greater degree of exposure leads to either severe weight gain or loss, and elevated cholesterol levels; among other detrimental health effects not directly linked to the endocrine system.

A study of workers employed in the manufacturing of PFAS conducted by 3M in 1992 revealed that a disproportionate amount of them was suffering from pancreatic and testicular cancers, while a later epidemiological survey showed similar results among a cohort of no less than 70.000 people living near a chemical plant. Scientists at the Alaska Community Action on Toxics recently found a connection between thyroid hormone concentrations and PFAS.

This is just a small part of the data which lead a number of research groups, including the Endocrine Society, to classify PFAS among Endocrine-Disruptive-Chemicals.

How can PFAS chemicals help a tumor form?

When neuroendocrines are under persistent duress from various causes, their DNA can suffer enough damage for the cell to lose its ability to accurately replicate. Cells thus affected continue to divide, sometimes with greater frequency than healthy ones, growing into a tumor.

PFAS chemicals are known to build up in the body to very high levels, potentially causing cell damage. They have been associated with a number of cancers, including those affecting the thyroid gland. Seven percent of all neuroendocrine tumors start in the thyroid.

Early-life exposures to endocrine disruptors have been linked to developmental abnormalities and may increase the risk of certain cancers, altered nervous system function, neurological and learning disabilities, and more.

PFAS-containing firefighting foam has led to direct exposure of firefighters, both military and civilian

For decades, firefighters have employed AFFF that contains PFAS not only to fight tough fires but also in training.

The potential health effects related to PFAS contamination are distressing, especially for military firefighters who served at more than 400 bases around the nation and now experience long-term exposure to these contaminants.

Across the nation, service members and military families are exposed to PFAS chemicals from firefighting foam

Thousands of gallons of PFAS substances have polluted the soils and the sewer systems in and around military bases. The extraordinarily powerful carcinogens, known as "forever chemicals" are present in firefighting foams the Air Force has used in routine firefighting training exercises for 40 years.

The Air Force has known of the disastrous impact the foam containing per- and polyfluoroalkyl substances have on human health for almost as long, but it continued to use it to put out emergency blazes and, far more often, to douse fires during foam training or demonstrations such as simulated aircraft crash.

PFAS pollution has been documented at 94 sites, including industrial plants, military bases, airports and, fire training sites, in 22 states

Because neuroendocrine tumors can form anywhere in your body, symptoms can range from shortness of breath to headaches and cramps in your belly. Patients may experience a variety of symptoms depending on where their tumor develops. General symptoms can include:

Studies show that human exposure to PFAS is widespread and that nearly all people in the U.S. have PFOA in their blood. If you have been exposed to high amounts of PFAS and want to know the amount of PFAS in your blood, talk to your doctor. Laboratories offer PFAS blood testing to individuals through their healthcare providers.

If you're living with neuroendocrine cancer, and you were also exposed to PFAS during your military service, you could be able to claim compensation. Although compensation cannot take away your disease, this money can help you and your family following a diagnosis, where you are already dealing with the physical and emotional impact of your condition.

If you have reasons to believe that your neuroendocrine tumor might have been caused by exposure to PFAS chemicals from the use of AFFF as a civilian or military firefighter, don't hesitate to schedule a free appointment with one of our lawyers and discuss ways in which you might pursue compensation for your injury. If you are a veteran, you will need to retrieve your military records and your medical records and send these document to our attorneys if you want to file a claim. With our highly pragmatic approach, we have represented thousands of firefighters throughout the U.S. with great rates of success and the most satisfactory outcomes.