What toxic chemicals were present in the drinking water at Camp Lejeune?

Although today, being stationed at Camp Lejeune no longer poses a risk of toxic exposure, between 1953 and 1987, numerous hazardous chemicals were lurking in the drinking water at this military base. Some of the most common were trichloroethylene, vinyl chloride, perchloroethylene, benzene, other industrial solvents, and degreasers. 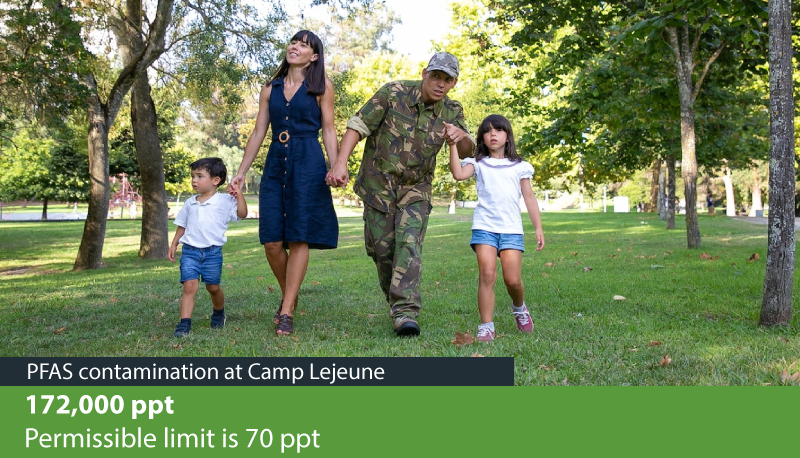 PFAS, also known as "forever chemicals", were present in the drinking water at Camp Lejeune

Stemming from aqueous film-forming foam – AFFF, for short – PFAS are toxic fluorinated chemicals that had been lurking in the drinking water at Camp Lejeune in a dangerous concentration of 172,000 ppt when the safe limit is only 70 ppt. They were released by military firefighters and trainees who used AFFF to extinguish petroleum and jet fuel fires. This fire suppressant contains between 50% and 98% PFAS, which makes it extremely dangerous. Some of the most serious diseases associated with exposure to PFAS are lung, breast, prostate, and liver cancer.

In addition to PFAS, the following toxic chemicals have been present at Camp Lejeune, contaminating the drinking water:

Other chemicals that have contaminated the water at Camp Lejeune during the last century are solvents and degreasers. Exposure to most substances from these categories usually takes a heavy toll on the nervous system, as they are neurotoxic. Some examples of solvents that might have been present at Camp Lejeune are acetone, ethanol, and methanol. As for degreasers, butyl degreasers and heavy-duty degreasers might have polluted this military base. Nevertheless, it is very important to know that at the moment, the water at Camp Lejeune is safe to drink for everyone who lives at the military base, as the harmful chemicals have been removed and the PFAS concentration is below the safe exposure limit.

Get in touch with our specialized attorneys to obtain financial compensation

If you are a veteran or a family member of one who has been stationed at Camp Lejeune for at least 30 consecutive days between August 1953 and December 1987, you might be entitled to financial compensation. For this reason, we highly advise you to contact our law firm, which has been pursuing compensation for toxic exposure victims for over 25 years. A substantial part of our clients are veterans and their family members, so we understand what you are going through and will strive to make the legal process as easy as possible.

All we will need from you if you intend to file a Camp Lejeune toxic water claim or lawsuit or a VA claim is your military records, which you must retrieve, and your medical records. Our experienced attorneys will carefully evaluate these documents to determine whether you meet the eligibility criteria to file a claim. If you do, they will promptly begin preparing it. It is important to know that only veterans have to retrieve their military records. Injured family members only have to provide their medical records and proof of their stay at Camp Lejeune. Eventually, you may recover the maximum compensation available for your diagnosis.